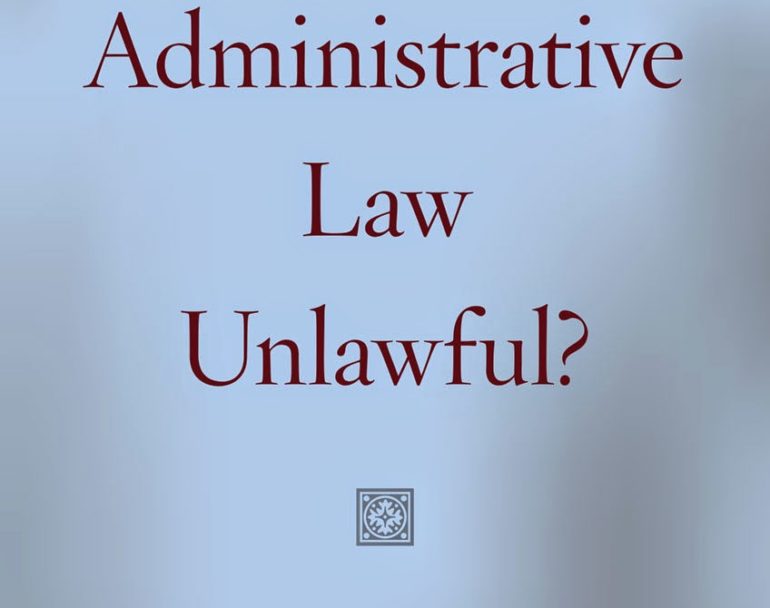 PHILIP HAMBURGER is the Maurice and Hilda Friedman Professor of Law at Columbia Law School. He received his B.A. from Princeton University and his J.D. from Yale Law School. He has also taught at the University of Chicago Law School, the George Washington University Law School, the University of Virginia Law School, and Northwestern Law School. A contributor to National Review Online, he has written for several law reviews and journals, including the American Journal of Legal History, the Supreme Court Review, the Notre Dame Law Review, and the Journal of Law and Politics. He is the author of Separation of Church and State, Law and Judicial Duty, and, most recently, Is Administrative Law Unlawful?

The following is adapted from a speech delivered on May 6, 2014, at Hillsdale College’s Allan P. Kirby, Jr. Center for Constitutional Studies and Citizenship in Washington, D.C., as part of the AWC Family Foundation Lecture Series.

In a way we can think of administrative law as a form of off-road driving. The Constitution offers two avenues of binding power—acts of Congress and acts of the courts. Administrative acts by executive agencies are a way of driving off-road, exercising power through other pathways. For those in the driver’s seat, this can be quite exhilarating. For the rest of us, it’s a little unnerving.

The conventional answer to this question is based on the claim of the modernity of administrative law. Administrative law, this argument usually goes, began in 1887 when Congress created the Interstate Commerce Commission, and it expanded decade by decade as Congress created more such agencies. A variant of this account suggests that administrative law is actually a little bit older—that it began to develop in the early practices of the federal government of the United States. But whether it began in the 1790s or in the 1880s, administrative law according to this account is a post-1789 development and—this is the key point—it arose as a pragmatic and necessary response to new and complex practical problems in American life. The pragmatic and necessitous character of this development is almost a mantra—and of course if looked at that way, opposition to administrative law is anti-modern and quixotic.

But there are problems with this conventional history of administrative law. Rather than being a modern, post-constitutional American development, I argue that the rise of administrative law is essentially a re-emergence of the absolute power practiced by pre-modern kings. Rather than a modern necessity, it is a latter-day version of a recurring threat—a threat inherent in human nature and in the temptations of power.

The Prerogative Power of Kings

The constitutional history of the past thousand years in common law countries records the repeated ebb and flow of absolutism on the one side and law on the other. English kings were widely expected to rule through law. They had Parliament for making law and courts of law for adjudicating cases, and they were expected to govern through the acts of these bodies. But kings were discontent with governing through the law and often acted on their own. The personal power that kings exercised when evading the law was called prerogative power.

Although England did not have a full separation of powers of the sort written into the American Constitution, it did have a basic division of powers. Parliament had the power to make laws, the law courts had the power to adjudicate, and the king had the power to exercise force. But when kings acted through prerogative power, they or their prerogative courts exercised all government powers, overriding these divisions. For example, the Star Chamber could make regulations, as well as prosecute and adjudicate infractions. And defenders of this sort of prerogative power were not squeamish about describing it as absolute power. Absolutism was their justification.

Conceptually, there were three central elements of this absolutism: extra-legal power, supra-legal power, and the consolidation of power. It was extra-legal or outside the law in the sense that it bound the public not through laws or statutes, but through other means. It was supra-legal or above the law in the sense that kings expected judges to defer to it—notwithstanding their duty to exercise their own independent judgment. And it was consolidated in the sense that it united all government powers—legislative, executive, and judicial—in the king or in his prerogative courts. And underlying these three central elements was the usual conceptual justification for absolute power: necessity. Necessity, it was said, was not bound by law.

These claims on behalf of absolutism, of course, did not go unchallenged. When King John called Englishmen to account extra legally in his Council, England’s barons demanded in Magna Carta in 1215 that no freeman shall be taken or imprisoned or even summoned except through the mechanisms of law. When 14th century English kings questioned men in the king’s Council, Parliament in 1354 and 1368 enacted due process statutes. When King James I attempted to make law through proclamations, judges responded in 1610 with an opinion that royal proclamations were unlawful and void. When James subsequently demanded judicial deference to prerogative interpretations of statutes, the judges refused. Indeed, in 1641 Parliament abolished the Star Chamber and the High Commission, the bodies then engaging in extra-legal lawmaking and adjudication. And most profoundly, English constitutional law began to develop—and it made clear that there could be no extra-legal,   supra-legal, or consolidated power.

The Rise of Absolutism in America

The United States Constitution echoes this. Early Americans were very familiar with absolute power. They feared this extra-legal, supra-legal, and consolidated power because they knew from English history that such power could evade the law and override all legal rights. It is no surprise, then, that the United States Constitution was framed to bar this sort of power. To be precise, Americans established the Constitution to be the source of all government power and to bar any absolute power. Nonetheless, absolute power has come back to life in common law nations, including America.

After absolute power was defeated in England and America, it circled back from the continent through Germany, and especially through Prussia. There, what once had been the personal prerogative power of kings became the bureaucratic administrative power of the states. The Prussians were the leaders of this development in the 17th and 18th centuries. In the 19th century they became the primary theorists of administrative power, and many of them celebrated its evasion of constitutional law and constitutional rights.

The Progressives, moreover, understood what they were doing. For example, in 1927, a leading Progressive theorist openly said that the question of whether an American administrative officer could issue regulations was similar to the question of whether pre-modern English kings could issue binding proclamations. By the 1920s, however, Progressives increasingly were silent about the continuity between absolute power and modern administrative power, as this undermined their claims about its modernity and lawfulness.

In this way, over the past 120 years, Americans have reestablished the very sort of power that the Constitution most centrally forbade. Administrative law is extra-legal in that it binds Americans not through law but through other mechanisms—not through statutes but through regulations—and not through the decisions of courts but through other adjudications. It is supra-legal in that it requires judges to put aside their independent judgment and defer to administrative power as if it were above the law—which our judges do far more systematically than even the worst of 17th century English judges. And it is consolidated in that it combines the three powers of government—legislative, executive, and judicial—in administrative agencies.

Let me close by addressing just two of many constitutional problems illuminated by the re-emergence of absolutism in the form of administrative power: delegation and procedural rights.

One standard defense of administrative power is that Congress uses statutes to delegate its lawmaking power to administrative agencies. But this is a poor defense. The delegation of lawmaking has long been a familiar feature of absolute power. When kings exercised extra-legal power, they usually had at least some delegated authority from Parliament. Henry VIII, for example, issued binding proclamations under an authorizing statute called the Act of Proclamations. His binding proclamations were nonetheless understood to be exercises of absolute power. And in the 18th century the Act of Proclamations was condemned as unconstitutional.

Against this background, the United States Constitution expressly bars the delegation of legislative power. This may sound odd, given that the opposite is so commonly asserted by scholars and so routinely accepted by the courts. But read the Constitution. The Constitution’s very first substantive words are, “All legislative Powers herein granted shall be vested in a Congress of the United States.” The word “all” was not placed there by accident. The Framers understood that delegation had been a problem in English constitutional history, and the word “all” was placed there precisely to bar it.

As for procedural rights, the history is even more illuminating. Administrative adjudication evades almost all of the procedural rights guaranteed under the Constitution. It subjects Americans to adjudication without real judges, without juries, without grand juries, without full protection against self-incrimination, and so forth. Like the old prerogative courts, administrative courts substitute inquisitorial process for the due process of law—and that’s not just an abstract accusation; much early administrative procedure appears to have been modelled on civilian-derived inquisitorial process. Administrative adjudication thus becomes an open avenue for evasion of the Bill of Rights.

In sum, the conventional understanding of administrative law is utterly mistaken. It is wrong on the history and oblivious to the danger. That danger is absolutism: extra-legal, supra-legal, and consolidated power. And the danger matters because administrative power revives this absolutism. The Constitution carefully barred this threat, but constitutional doctrine has since legitimized this dangerous sort of power. It therefore is necessary to go back to basics. Among other things, we should no longer settle for some vague notion of “rule of law,” understood as something that allows the delegation of legislative and judicial powers to administrative agencies. We should demand rule through law and rule under law. Even more fundamentally, we need to reclaim the vocabulary of law: Rather than speak of administrative law, we should speak of administrative power—indeed, of absolute power or more concretely of extra-legal, supra-legal, and consolidated power. Then we at least can begin to recognize the danger.

“Reprinted by permission from Imprimis, a publication of Hillsdale College.” �P����