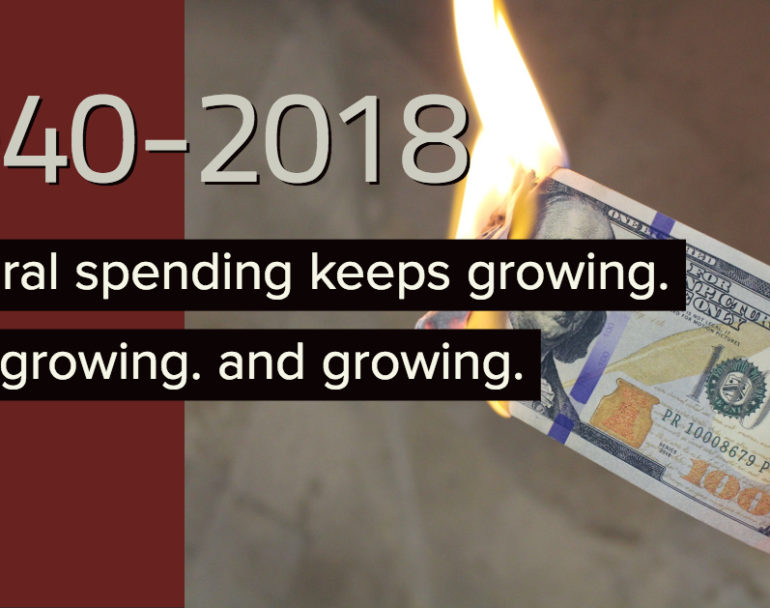 In March of 2018, President Trump signed into law a $1.3 trillion omnibus spending bill to avoid shutting down the federal government. After signing the 2,200-page bill, the president proclaimed he would “never sign another bill like this again.” Could this really be the end of the decades-long trend of expanded central spending and power? If past history tells us anything, the answer is a resounding “No!”

The truth is for nearly the last century, there has been an undeniable, dramatic trend upward in government spending in real and in nominal terms. In fact, since 1940, average yearly federal spending has increased during every single administration – whether Republican or Democratic Party.

There have only been 12 years (mostly under Truman, Eisenhower, and Clinton) in which the government hasn’t run a federal deficit. As you can see, it doesn’t matter who the president is, or which party holds the majority in Congress, there has always been a reason to keep government spending going; from wars, to bailouts, to social programs, or simply to kick the can down the road.
The seeds for the modern-day spending regime were planted in the policies that funded the first World War I during the Wilson administration. They really began to take root in the aftermath of the stock market crash of 1929. World War I provided cause for the federal government to spend outside of it means in the name of “providing for the common defense”, but the economic havoc created by the Depression justified vast governmental intervention beyond constitutionally authorized limits and into aspects of the American economy.

It was Franklin Delano Roosevelt’s administration that was tasked with the burden of navigating the U.S. through the Great Depression and an agenda was set up to do so. FDR’s crusade to save the economy was branded as “The New Deal” and brought along with it a host of expensive programs and agencies including the PWA, the CWA, the CCC, the NYA, the SEC, and many more. But the most costly program created in this era was Social Security. Since its inception, the failure of the Social Security Office to adapt to changing demographics and improving life expectancies has contributed to a larger and larger part of the annual deficit almost every year.

While deficits in the 1930s were caused by social program expansion and implemented Keynesian economic models, the deficits that ran into the 1940s at the height of U.S. involvement in World War II compounded the country’s spending problem. Spending at the peak of the war dwarfed that of the Great Depression and topped half a trillion dollars* annually by the end of Roosevelt’s presidency.

The vast expansion of spending on social programs and war slowed as the U.S. general ledger oscillated between relatively small deficits and small surpluses through the 50s. However, deficit spending trends resumed after the election of JFK in 1961. JFK ran deficits every year of his presidency as he ramped up U.S. involvement in the Vietnam War. When Vice President Lyndon B. Johnson was sworn in as president following Kennedy’s assassination, America had accumulated nearly $2.5 trillion of national debt.

During the Johnson administration, spending in absolute terms skyrocketed compared to his predecessor, but the resulting deficits actually ended up being pretty mild, as Johnson’s spending spree was financed by increased taxes on the American public. In 1964 and 1965, Johnson’s main domestic concern was fighting the “War on Poverty” through a new series of social programs called “The Great Society.” The Great Society was an economic attempt by the government to rectify all of the injustice done to victims of inequality and offered them a “hand-up” and not a “hand-out” of their current socio-economic situation.

The Great Society Programs created another host of expensive agencies responsible for eliminating all types of inequality. The Office of Economic Opportunity, Job Corps, and the Older Americans Act are some examples of this. The Departments of Transportation and Housing and Urban Development also cropped up as part of the Great Society. But also, federal education funding saw an unprecedented expansion during this time as did the benefits provided by the Office of Social Security. Medicare and Medicaid also came as a part of the Great Society’s package in 1965, which to this very day, combined with Social Security, now make up two-thirds of annual federal spending.

On the foreign front, Johnson greatly expanded America’s role in Vietnam in 1964 and escalated it every year thereafter. The cost of Johnson’s foreign interests and domestic policies blew out the federal deficits as his administration continued and reached their highest levels towards the end of his presidency.

After President Nixon took office in 1969, spending continued to increase and the country ran uninterrupted deficits for nearly 30 years, all the way up through Ford, Carter, Reagan, Bush and until 1998 under the Clinton administration. Fortunately, part of the nation’s economic drain ended in 1975 under Gerald Ford, when he formally ended the War in Vietnam. However, during his short-lived presidency, he was not able to stop the spending on programs that were already in place. During the Carter Years, the Departments of Education and Energy were stacked on the top of the list of other costly executive agencies. The Department of Energy was formed as a response to the 1973 Oil Crisis and the Education Department’s existence was justified by Carter’s reasoning that “education is far too important a matter to be scattered piecemeal among various government departments and agencies, which are often busy with sometimes dominant concerns”.

During this deficit streak, the federal debt accumulated most rapidly during the Reagan and Bush I eras. This was the era of “Reaganomics”. Although the goal of Reaganomics was to cut taxes and spending, it was only politically successful in the former and occurred without the proper adjustment in spending tendencies. Spending again ballooned while Reagan held office. The result was $4 trillion of debt being accumulated during the Reagan and Bush years.

Up until the first federal surplus under Clinton, America was nearly $9 trillion in debt.

It’s important to note since Eisenhower’s last surplus, the debt had never fallen as the federal government kept spending. The Clinton surpluses came despite federal outlays with increased revenue from taxes. From 1998-2001, the debt fell to 8.3 trillion dollars and it was the first drop in the federal debt seen since 1960. At that rate, the government could have paid off nearly 60 years worth of debt in around 50 years. The rate was not ideal, but it was something, and it was perceived as a sign of the country getting on the right track in regard to its debt. But that is unfortunately not how the story continues.

Post-2001 federal spending ramped up at levels not seen since World War II. George W. Bush notoriously jacked up spending on giant government-run security agencies and the Iraq War, throwing the United States $2 trillion deeper into debt by the end of his two terms. The tragedy of 9/11 served as justification for the Bush administration and a majority of Congress to increase federal spending in the name of national defense. These policies not only created massive economic consequences, they also led to a severe curtailment of 4th Amendment rights by way of the National Security Agency, but that is another discussion for another time.

If Bush unlocked the door to these levels of spending after 2001, President Barrack Obama kicked it down.

Under Obama, there seemed to be a whole host of reasons why government spending needed to be increased. This resulted in the largest annual deficits in U.S. history. First of all, Obama’s presidency was characterized by increased involvement in the Middle East, particularly in Iraq and Afghanistan, leading to increased military spending, just as we saw during WW I, WW II, and Vietnam. While “defense” spending ate up a sizable chunk of taxpayer dollars collected, Obama’s domestic policies are the main culprit in sending spending to historic highs during this time.
Obama’s presidency began almost immediately following the financial collapse of 2007, and he was expected to lead America through the Great Recession. In an attempt to prevent the crisis from turning into a depression, the Obama administration implemented giant quantitive easing programs designed to bail out large financial institutions and government-sponsored enterprises such as Freddy Mac and Fannie May. During his first term, Obama ran deficits of over a trillion dollars every year due to these policies and many say that they elongated the recession by rewarding the bad behavior of bad actors with public funds.

Additionally, during the largest modern financial crisis of the modern era, Obama saw this as a convenient time to restructure one-fifth of the American economy with his healthcare policy. The ACA, or Obamacare, passed in 2010 and introduced a slew of new regulations on the healthcare and health insurance industries. These needed to be enforced using public resources and contributed to the historic over trillion-dollar deficits in his first term.

During his second term, Obama’s monetary policy was ratcheted down as the economy began to show some signs of recovery, but half-trillion dollar deficits remained the norm until his presidency ended in 2016 as his foreign and domestic policies continued to be implemented. When Obama entered office in 2008, the national debt was roughly $10 trillion. After his terms ended, $10 trillion ballooned into $17 trillion.

This nearly 70 percent increase in the national debt was the result of the historic spending tendencies of the Obama administration. However, he would not have had the power or authority to implement his policies if it were not for the precedent set by past administrations. Every president – both Republican and Democrat – has found new means to justify new ends paid for with increased government spending.

And now the Trump administration is following in their footsteps.

it doesn’t seem to matter what color tie the president or the congressional majority wears – red or blue. After all, the other president in the modern era who racked up debt as quickly as Obama was Republican savior Ronald Reagan. Barring few exceptions, accumulating debt through yearly deficits for the last nearly 80 years has been an American tradition, like baseball and apple pie. No matter who is in office, spending goes up. Even in years with small deficits, spending generally increased.

It was only a matter of time before a president could come around and exploit the list of reasons we have chosen over the last 80 years to justify spending outside of our means. The questions at hand now are how we will react when the debt we have collected thus far rears its ugly head and how will we mitigate the risks that our spending habits pose to us in the meantime.

*All dollar figures based on 2009 dollars adjusted for inflation.