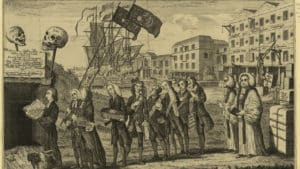 At its core, the American Revolution was a constitutional crisis.

In effect, the British system operated based on a “living breathing” constitution, formed and defined by the government itself.

In a very real sense, the War for Independence was the result of a constitutional crisis.

A year after Parliament began passing the Townshend Acts in 1767, the Massachusetts legislature approved a document written by Samuel Adams and James Otis Jr. known as the Massachusetts Circular Letter. In it, we see this revolutionary conception of government beginning to take form. Adams and Otis argued that when Parliament acts outside of its constitutional bounds, it destroys its own foundation.

“The House have humbly represented to the ministry their own sentiments, that his Majesty’s high court of Parliament is the supreme legislative power over the whole empire; that in all free states the constitution is fixed, and as the supreme legislative derives its power and authority from the constitution, it cannot overleap the bounds of it without destroying its own foundation; that the constitution ascertains and limits both sovereignty and allegiance, and, therefore, his Majesty’s American subjects, who acknowledge themselves bound by the ties of allegiance, have an equitable claim to the full enjoyment of the fundamental rules of the British constitution.” [Emphasis added]

It wasn’t long before Americans began to question the very notion of sovereignty itself. It was an evolutionary process to be sure, but eventually, the colonists began to conceive of sovereignty residing in the people, not in any part of government. Instead of a monarch or a legislative body holding plenary power, the people stood supreme.

Thomas Jefferson incorporated this idea in the Declaration of Independence.

“That to secure these rights, Governments are instituted among Men, deriving their just powers from the consent of the governed, –That whenever any Form of Government becomes destructive of these ends, it is the Right of the People to alter or to abolish it, and to institute new Government, laying its foundation on such principles and organizing its powers in such form, as to them shall seem most likely to effect their Safety and Happiness.”

By affirming that government derives its power from the consent of the governed and that the people can alter or even abolish it at their will, the Americans flipped the British conception of government on its head.

By the time delegates gathered at the Philadelphia Convention and began drafting the Constitution, this idea of sovereignty residing in the people was well-established and generally accepted. The state constitutions drafted in the years following the Declaration of Independence reflected this concept. They were written, fixed, and alterable only by an act of the people. The legislatures could no longer change these constitutions on a whim.