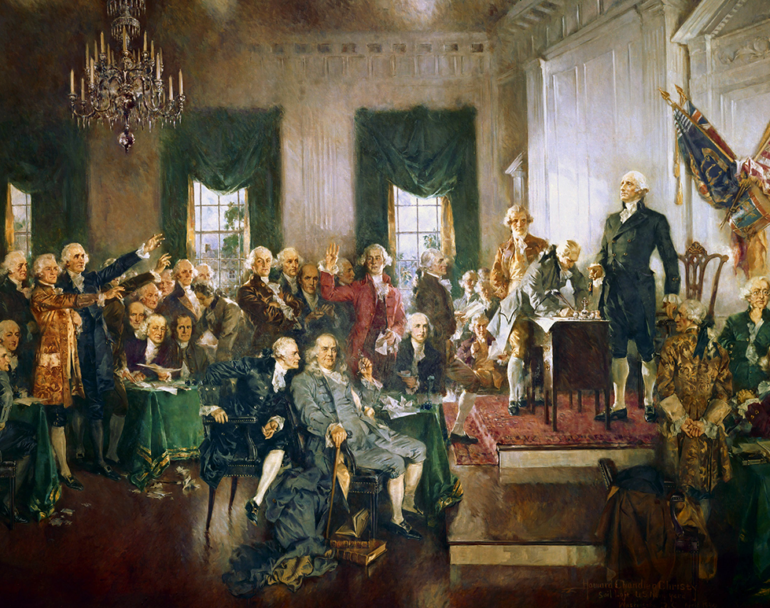 On May 14, 1787, delegates from the several states convened in Philadelphia, forming a convention with the initial aim of proposing amendments to the Articles of Confederation. Over the course of the next four months, they formulated a model for a new general government which would require the positive ratification of nine states. According to Article VII, it was a compact between states “so ratifying the Same.”

Madison and Randolph supported a bicameral legislature, where both houses would be apportioned by population and the lower house would elect the upper house. Instead, one house apportioned by population while the other would have equal suffrage. Madison and Randolph drew plans to allow for a powerful federal judiciary, with the power to rule on all cases of perceived importance. Instead, the Constitution authorized a less powerful judiciary that could only adjudicate original certain types of cases. Madison and Randolph went to the Philadelphia Convention with the hope that the Congress would have a veto power over state laws. This proposal was exceedingly unpopular, and Madison complained about it in the months after the convention, eventually describing his disdain toward the omission in an October 1787 letter to Thomas Jefferson.

Alexander Hamilton arrived with a plan that called for the executive to be a monarch, for him to appoint the State Senators and Governors, and for the states to effectively be dissolved and homogenized into a single body. The convention scorned this model, and he did not get his wish. Hamilton also proposed that the Senators should serve for “during good behavior or life.” The obvious product of the Constitution is that they would serve six-year terms.

Notable Federalists in the states, such as Charles Pinckney, Edmond Randolph, Alexander Hamilton, James Iredell, and Fisher Ames described the Constitution in their respective state ratification conventions as a mechanism which would bring a limited government with specific, enumerated powers, whereupon no other authority could be exercised. The Tenth Amendment, which most states desired in order to make these assurances explicit, was deemed by Thomas Jefferson to be the “foundation” of the federal Constitution.