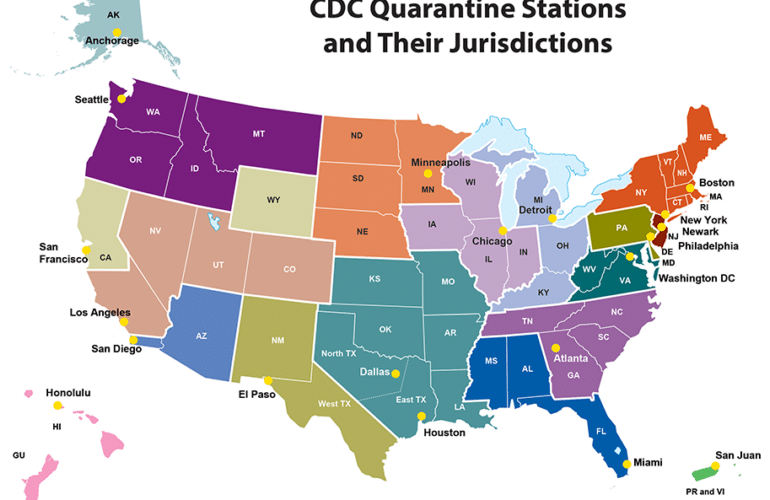 Kimberly Wehle wrote an article for Politico arguing that we need a national quarantine. The headline declares, “Yes, a National Quarantine Is Constitutional … and Necessary.”

But despite asserting the constitutionality of a national quarantine, Wehle fails to make a constitutional argument. She never points to the section of the Constitution that delegates such quarantine power to the federal government. She just asserts that it exists, swirling somewhere in the mystical cloud of “executive powers.”

“The Trump administration has resisted such drastic measures, shunting responsibility onto the states, but the power is nevertheless within the executive branch, and it can be imposed without violating the Constitution.”

Wehle’s credentials include “law professor” and “former assistant United States Attorney.” I expect bad constitutional reasoning from lawyers. But Wehle’s argument is bad even by lawyer standards. She takes a tact that borders on juvenile, arguing “one reason the federal government can constitutionally infringe on all kinds of individual rights is that sometimes protecting the greater public good requires it.”

No mention of delegated powers, the limited role of the general government, or the division of authority between the legislative and executive branches. Her “constitutional” argument amounts to “the federal government needs to do it, so it can.”

The actual constitutional calculus is quite simple. Does the Constitution specifically delegate any power to the federal government to institute a national quarantine?

No. (The general welfare clause does not give the federal government a blank check to act and is limited by the delegated powers that follow. I cover that in-depth HERE.)

Is “quarantine power” necessary and proper for the furtherance of a specifically delegated power?

That means the power to quarantine remains with the state governments.

It’s important to note that even if the federal government had some quarantine power, it would be vested in Congress. Under the constitutional system, the legislative branch passes laws. The president merely executes them. He has no authority to will a policy into existence with the stroke of a pen. In an essay known as “Helvidius” Number 1, James Madison clearly states the president’s power extends only to putting existing law into effect.

But Wehle doesn’t seem to rest her argument solely on executive authority. She claims that the president has “extraordinary powers” under federal law to implement a national pandemic response program and cites several acts that purport to authorize this authority. But the question remains: where does the Constitution delegate this power to Congress?

So, the power to quarantine remains with the state governments. This is clear under the Tenth Amendment. Interestingly, the bulk of Wehle’s argument reinforces this point. All of the Supreme Court cases she cites in support of a national quarantine revolve around state quarantines.

Wehle starts with  Jacobson v. Massachusetts where the SCOTUS held that a state can constitutionally “require and enforce the vaccination and revaccination of all the inhabitants thereof.”

Wehle correctly asserts, “This category of state power is known as the police power, and it means that states can enact quarantine laws and health laws of every description . . . to protect the public health and the public safety.’” She fails to mention that the Constitution does not delegate police powers to the federal government.

Next, Wehle notes that “In 2014, a number of states implemented quarantines for health care workers and others who had gone to West Africa during the Ebola epidemic, and two federal courts rejected constitutional challenges to the Ebola-inspired mandates.”

She still fails to mention that the Constitution does not delegate police powers to the federal government.

Wehle also cites Morgan’s Steamship Co. v. Louisiana Board of Health, an 1886 case in which the Supreme Court upheld Louisiana quarantine laws. This is the closest she comes to making an argument asserting a federal quarantine power. The court held that “all state laws on the subject will be abrogated [by federal law] at least so far as the two are inconsistent.” The court was referring to quarantines authorized under the commerce clause, not quarantines to deal with a nationwide pandemic, government actions that would fall under police powers.

Have I mentioned that the Constitution doesn’t delegate police powers to the federal government?

While Wehle fails to make a legitimate constitutional argument for a federal quarantine, she does makes a fair pragmatic case for “a coordinated federal response.”

“It is beyond reasonable debate that the current hodge-podge of state and local rules do not go far enough to protect overall public health,” she wrote.

We can have that debate, I suppose, but that doesn’t change the constitutional calculus.

Tench Coxe was an influential supporter of the Constitution during the ratification process. He wrote three essays published in the Pennsylvania Gazette in early 1788 under the pen-name “A Freeman.” In these essays, Coxe offered some of the most forceful arguments asserting the limited nature of the federal government under the proposed Constitution, and he insisted that many of the things necessary to maintain society would nevertheless be off-limits to the federal government.

“It will be found, on a careful examination, that many things, which are indispensibly necessary to the existence and good order of society, cannot be performed by the fœderal government, but will require the agency and powers of the state legislatures or sovereignties, with their various appurtenances and appendages.”

So, just because you can make a compelling argument that federal action would benefit society, or is even necessary, doesn’t mean you’ve made a constitutional argument. You still have to do the constitutional calculus.

Wehle never does. Like any good lawyer, she leaves us with plenty of assertion, supposition and conjecture but she gets an F in constitutional calculus.