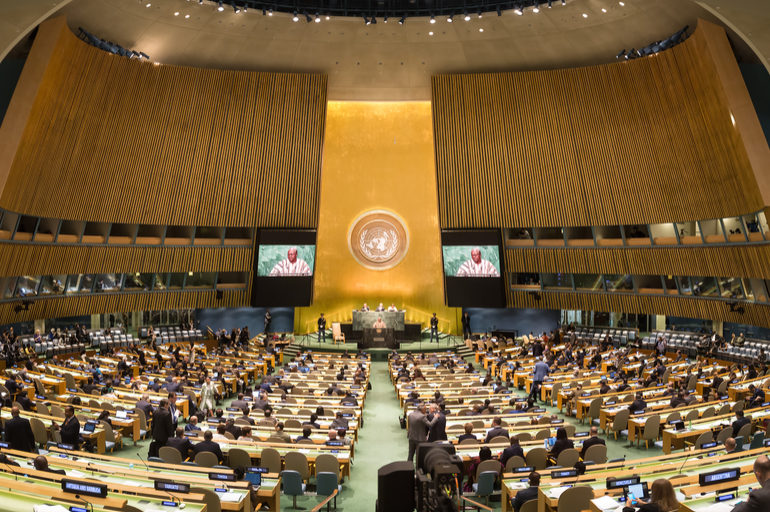 During periods of resurgent national feeling, it’s common for enthusiasts of liberal international order and human rights activists to begin emphasizing the importance of international law and the way they think it should guide and restrain the choices of nations. Since the United Nations Assembly adopted the Universal Declaration of Human Rights (UDHR) in December 1948, much international law has been elaborated via sovereign states affirming various international declarations and statements of rights through devices such as national constitutions or ratification of international treaties.

The source of these rights, however, invariably goes unmentioned. The UDHR refers, for instance, to “the inherent dignity and of the equal and inalienable rights of all members of the human family.” Yet the document is silent on the foundation of this dignity and these rights—likely because the UDHR’s drafters disagreed profoundly about this subject. This makes for a conspicuous contrast with an 18th century text like the United States Declaration of Independence. This unequivocally locates the source of the enumerated rights identified in the document as “the Laws of Nature and Nature’s God” and man’s “Creator.”

Similar language permeates most of the early modern writings which outlined how nations should interact with each other. These range from treatises penned by the Jesuit theologian Francisco Suárez (1548-1617), to books written by the German philosopher Samuel von Pufendorf (1632-1694), and the Dutch jurist Hugo Grotius (1583-1645). Their thought on these matters was also shaped by the need to rightly order the new international system which had emerged as a consequence of the rise of the modern sovereign state.

The concept of the ius gentium—the law of nations—played a substantial role in these reflections. First elaborated by Greek and Roman thinkers, it underwent significant modifications over the centuries as scholars debated topics such as the law of nations’ precise relationship to natural and positive law or the implications of Thomas Hobbes’ law of nature for international law. The most important 18th century effort to systematize the law of nations on the basis of natural law was Emer de Vattel’s Les Droit de gens [The Law of Nations] (1758).

A native of Neuchâtel, a French-speaking and commercially prosperous Protestant enclave in contemporary Switzerland ruled by the King of Prussia, Emer de Vattel (1714-1767) was a Prussian subject, though much of his professional life was spent as an official of the Elector of Saxony.

That context is important inasmuch as Vattel was conscious of how the acceleration of trade across borders was transforming relations between states. Many were starting to question the efficacy and justice of the dominant mercantile system. More positive views of commerce were also beginning to prevail, thanks to Enlightenment figures like the Baron de Montesquieu. One of Vattel’s concerns was how natural law and its pivotal concerns for good, evil, the right, and justice could mediate relations between competitive and autonomous sovereign states driven by political self-interest and yet increasingly bound together by growing international trade.

When writing his book, Vattel assumed the absence of some higher international authority whose decisions could bind sovereign states. At the time, the only possible candidates for such a position were the Holy Roman Emperor (a Catholic monarch intent on protecting and expanding Habsburg power) and the Pope. Neither of these figures was going to secure the surrender of the sovereignty of Europe’s Protestant states—or, for that matter, acquire the loyalty of absolutist Catholic monarchs uninterested in submitting their realms to the jurisdiction of an 18th century Charlemagne or a pope.

Vattel was in any case convinced that relative international stability would be generated by adherence to natural law from below. One theme of his Law of Nations was that if sovereign states ordered their domestic affairs in accordance with principles of natural law, the international sphere would experience positive spillover effects. In the long term, Vattel believed, this would introduce greater tranquility into relations between states, not least by gradually transforming an international system characterized by frequent conflicts into what the editors of 2008 Liberty Fund edition of the Law of Nations describe as a “virtuous competition.”

A nation in which natural justice prevails, Vattel surmised, was more likely to behave justly towards, for example, the rulers and citizens of those nations with whom they may have occasion to go to war. Similarly, Vattel contended that if nations organized their domestic economies in ways which integrated 1) what he viewed as the natural right to trade that more and more individuals were exercising across sovereign borders with 2) defined limits on the extent to which government could regulate domestic and international trade, it would likely facilitate greater order in international commerce.

It’s important to note that Vattel did not see the application of natural law to these and other matters as resulting in a borderless world or the extinguishing of sovereign states. He had a heightened sense of how human fallibility and perceived self-interest shaped political affairs. Vattel consequently adhered to a “balance of power” understanding of international relations rather than the type of perpetual peace project advocated by Immanuel Kant in 1795. Hence Vattel sought to delineate principles that self-interested states led by flawed individuals should follow when making political and economic decisions.

Like many 18th century Protestant natural law thinkers, Vattel was reacting to the influence of Hobbes’ view of the law of nature and its bleak view of humanity upon the approach of figures like Pufendorf to international law. Nevertheless Vattel was also trying to 1) delineate systematically natural law’s implications for international order with what he described as “a precision founded on right reason” in ways that were 2) attentive to the social changes being unleashed by the growth of commercial society in the Age of Enlightenment. This mixture of factors may have been what made Vattel’s Law of Nations a major reference-point for particular American Founders as they pondered similar questions.

Discussions of the saliency of natural law thought for the American Revolution and its aftermath usually gravitate to emphasizing the significance of William Blackstone’s Commentaries upon British American lawyers. Vattel’s Law of Nations, however, was a standard text for Americans obliged to wrestle with international law. The book was referenced extensively by Alexander Hamilton when advising President George Washington on foreign policy issues such as the substance of America’s treaty obligations to France following Louis XVI’s execution in 1793.

But Vattel not only shaped Hamilton’s views about how sovereign states should interact with each other. Key ideas expressed in the Law of Nations effected Hamilton’s understanding of the domestic responsibilities of government and how people in public life ought to behave.

Perhaps most significantly, Vattel’s systematic exposition of natural law principles counterbalanced the impact of David Hume’s thought on Hamilton. To some of his contemporaries’ dismay, Hamilton agreed with Hume that it is foolish to ignore human corruptibility when considering how to establish and maintain stable political communities. But reading Vattel’s Law of Nations seems to have helped convince Hamilton of the basic reasonability of core propositions of natural law: that, for instance, there are universal moral truths knowable by reason.

This tempered the effect of Hume’s skepticism on Hamilton’s conception of the place of morality in politics. Yes, humans might be eminently corruptible. On the other hand, this didn’t mean that people in politics couldn’t know and do what was good and just. Vattel wasn’t shy about underscoring what he regarded as morality’s social utility. Yet he insisted that morality in the conduct of domestic and foreign policy was also a question of doing what is right for the sake of justice.

This outlook appealed to someone like Hamilton. Virtually all his biographers stress Hamilton’s awareness of human nature’s dark side. They also, however, specify that Hamilton held that politics had to be cognizant of matters of right and justice. Similarly Vattel’s incorporation of attention to major political and economic changes of his time into his natural law approach to international relations would have made Hamilton more amenable to seeing the world in these terms: that the statesman’s responsibility is to consider what is advantageous to his country and what justice requires a nation to do.

At the same time, Vattel’s focus on natural law—as opposed to a strict natural rights position—contributed to Hamilton’s inclination to approach some questions differently from those American Founders for whom Locke’s language of natural rights to life, liberty and property was a primary reference point. In his 1979 biography of Hamilton, Forrest McDonald illustrated the extent to which Hamilton’s conception of the role of the government appears to draw upon Vattel’s Law of Nations.

The Purposes of Government

At one point during the 1787 Constitutional Convention, Hamilton described government’s three purposes as 1) providing “the great purposes of commerce, revenue, [and] agriculture”; 2) facilitating “domestic tranquility & happiness”; and 3) establishing “sufficient stability and strength to make us respectable abroad.” These effectively paraphrase Vattel’s thesis in the Law of Nations that the “principal objects” of government were to help establish the nation’s necessities, procure the country’s “true happiness,” and to fortify the nation against external aggression. These three responsibilities aren’t incompatible with the Lockean emphasis on government protecting life, liberty and property. They do nonetheless take us beyond the logic of Lockean natural rights discourse.

Vattel’s influence upon Hamilton’s view of international relations was equally important. McDonald suggests that Hamilton was impressed by Vattel’s framework for approaching the subject of international trade. Like Vattel, Hamilton regarded trade as something that it was generally better for governments to avoid meddling in. But he also drew from Vattel the notion that the state’s obligation to provide for the nation’s necessities might mean that governments may occasionally have to act in ways that depart from a strict free trade position.

Vattel was far more precise in delineating the situations in which these responsibilities might arise than Hamilton. For Vattel, free commerce between nations should be the norm. That, however, was why his Law of Nations detailed at length the principled grounds upon which a government had to justify any of its forays into trade and economic life. Hamilton was admittedly somewhat vaguer in identifying such cases. What he shared with Vattel, however, was the belief that the same public interest which normally translated into a nation favoring the expansion of international commerce could, on occasion, provide reasons for a government to intervene in the conduct of trade.

Like Hamilton’s writings, Vattel’s Law of Nations reflects its author’s remarkably broad theoretical interests (even by the period’s high standards) as well as his practical experience of involvement in public affairs. That adds up to an approach to international relations characterized by realism in the sense of commitment to the moral truths revealed by right reason and also how these principles are applied in changing economic and political conditions. To that extent, the Law of Nations has much to teach students of both natural law and international relations in our own time.