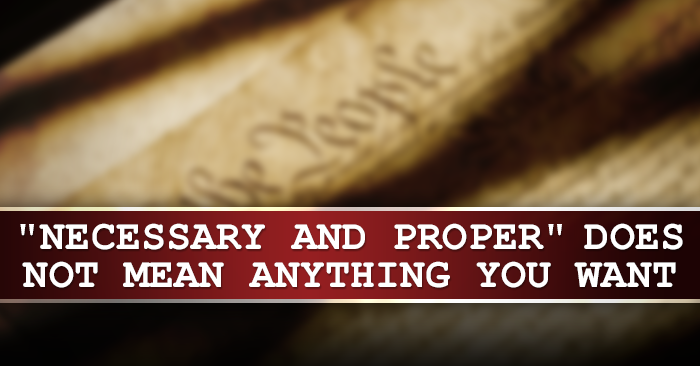 In former law professor Rob Natelson’s recent paper, “No, the Necessary and Proper Clause Does NOT Empower Congress to Control an Amendments Convention” [read it HERE or HERE], he makes several untrue statements and commits the gross fallacy of making a circular argument which begs the question.

Natelson is the intellectual guru of those pushing for an Article V convention. Among the false claims they make is that a convention will be controlled by the States, and Congress has nothing to do with it. 1

That false claim rests on Natelson’s (1) fanciful theory of “customs”, (2) his tortured interpretation of the necessary and proper clause, (3) his misrepresentations of Supreme Court cases, and (4) his crimes against the Laws of Logic.

What Does Article V Say?

Article V provides two methods of proposing amendments to our Constitution. Congress proposes amendments and submits them to the States for ratification; or Congress “calls” a convention if 2/3 of the States apply to Congress for a convention. All our existing 27 amendments were proposed using the first method. We have never had a convention under Article V – for good reason. 2

What does the Necessary and Proper Clause Say?

“The Congress shall have Power”… “To make all Laws which shall be necessary and proper for carrying into Execution the foregoing Powers, and all other Powers vested by this Constitution in the Government of the United States, or in any Department 3or Officer thereof.” [boldface mine]

The Federalist Papers confirm the plain language of the Constitution: §8 delegates to Congress the power to make laws for executing the powers delegated to each branch of the federal government. 4

How Does the Necessary and Proper Clause Apply to Article V?

But Natelson – mind, he is their “cutting edge intellectual” – insists that the necessary and proper clause does NOT delegate to Congress power to organize & set up an Article V convention.

But Natelson has long insisted that customs followed at conventions during our “Founding Era” determine how a convention called under Article V will be organized & set up. He says in his paper:

“… An entity that calls an interstate convention always has been limited to specifying the time, place, and subject matter. It is the state legislatures who control selection of their own commissioners, thank you very much.”

“Founding Era” customs supersede our Constitution? And where does Article V say a convention called under Article V is an “interstate” convention?

(2) Natelson’s Tortured Interpretation of the Necessary and Proper Clause

“… is not a grant of authority, but a rule of interpretation. It tells us to construe certain enumerated powers as the ratifiers understood them rather than in an overly-narrow way. …” [emphasis mine]

A “rule of interpretation”? As authority for this claim, Natelson cites a book co-authored by his own illustrious self which you can buy for $34.99.

So! While Hamilton and Madison said in The Federalist Papers 4 that the necessary and proper clause was a “grant of power to Congress” to make the laws to execute the powers delegated;

and Madison and Thomas Jefferson said The Federalist Papers were:

“an authority to which appeal is habitually made by all, and rarely declined or denied by any as evidence of the general opinion of those who framed, and of those who accepted the Constitution of the US. on questions as to it’s genuine meaning” 6

Natelson says the clause is a “rule of interpretation” instead of a “grant of power”, and his $34.99 book is authoritative instead of The Federalist Papers.

Natelson next asserts “the Necessary and Proper Clause does not extend to the amendment process” because when Congress acts on Article V, it is not a Department or Branch of the federal government. Instead, it is an “ad hoc assembly”.

But Natelson says he “knows” this from the “Founding Era record”, from subsequent history, and from decisions of the U.S. Supreme Court, such as U.S. v. Sprague (1931).

The issue in U.S. v. Sprague was whether the 18th Amendment (Prohibition) should have been ratified by conventions in each State instead of by State Legislatures. The Supreme Court held that Article V “is a grant of authority by the people to Congress” and that the people “deliberately made the grant of power to Congress in respect to the choice of the mode of ratification of amendments”. Accordingly, Congresshad authority to select ratification of the proposed Amendment by State Legislatures instead of by conventions in each State.

U.S. v. Sprague has nothing to do with what Natelson claims it says!

Yet, Natelson goes on to say he “knows” that Congress can’t pass laws structuring the Convention because a “long list of 20th century cases” holds that “ordinary legislation does not bind the amendment process. See, for example, Leser v. Garnett (1922).”

Of course, Natelson doesn’t provide this “long list of 20th century cases”; and the one case he did cite, Leser v. Garnett, has nothing to do with Congress’ law making powers.

Now let’s look at Natelson’s crimes against the Laws of Logic.

Natelson was supposed to prove that the necessary and proper clause does not give Congress power to make laws to organize & set up a convention under Article V.

But – as you have seen – he didn’t prove it. So he assumed it to be true. He asserts as true:

“The framers inserted the ‘Convention for proposing Amendments’ in the Constitution to provide the states with a way of obtaining constitutional amendments without federal interference.” [emphasis mine]

Since he assumes this to be true – he concludes that the necessary and proper clause can’t give Congress power to make laws to organize & set up a convention under Article V. He says:

“Why would the framers place in the Constitution a method by which Congress could largely control a convention created to bypass Congress?”

Do you see? He concludes that the necessary and proper clause doesn’t give Congress the power to make laws to organize & set up a convention because he has already assumed as true that the convention method was put in so States could get amendments without Congress’ control.

Yet, Natelson’s work is the “authority” on which those who seek to force an Article V convention on us rely – a slender reed, to be sure. Take heed, America!

1 Above all else, REMEMBER THIS: Whether Congress or the States organize & set up a convention is NOT the critical issue. In either case, the delegates – whoever selects them – are vested with that inherent sovereign right to throw off our Constitution and propose a new one (Declaration of Independence, 2nd para). The new one will have its own new mode of ratification.

2 Brilliant men have warned against an Article V convention. It is immoralto dismiss their warnings:

Alexander Hamilton writes of “the utter improbability of assembling a new convention, under circumstances in any degree so favorable to a happy issue, as those in which the late convention met, deliberated, and concluded…”  Federalist No. 85 (9th para)

James Madison writes in his Nov. 2, 1788 letter to Turberville that an Art. V convention would give “the most violent partizans” and “individuals of insidious views” “a dangerous opportunity of sapping the very foundations of the fabric” of our Country. In Federalist No. 49, heshows that the convention method is NOT GOOD to correct breaches of the federal constitution because the People aren’t philosophers – they follow what influential people tell them! And the very legislators who caused the problem would get themselves seats at the convention so they could control the outcome.

Former US Supreme Court Justice Arthur Goldberg reminds us in his Sep. 14, 1986 article in The Miami Herald, that at the convention of 1787, the delegates ignored their instructions from the Continental Congress and instead of proposing amendments to the Articles of Confederation, wrote a new Constitution. He warns that “…any attempt at limiting the agenda [of the convention] would almost certainly be unenforceable.”

Former US Supreme Court Chief Justice Warren Berger warns in his June 1988 letter to Phyllis Schlaflythat “there is no effective way to limit or muzzle the actions of a Constitutional Convention”; “After a Convention is convened, it will be too late to stop the Convention if we don’t like its agenda”; and “A new Convention could plunge our Nation into constitutional confusion and confrontation at every turn…”

3 In Federalist No. 48, Madison refers to the 3 branches of the fed gov’t as “departments”.

4 Federalist No. 33is devoted to the necessary and proper clause. Hamilton writes:

“What is a power, but the ability or faculty of doing a thing? What is the ability to do a thing, but the power of employing the MEANS necessary to its execution? What is a LEGISLATIVE power, but a power of making LAWS? What are the MEANS to execute a LEGISLATIVE power but LAWS? …. But the same process will lead to the same result, in relation to all other powers declared in the Constitution. And it is EXPRESSLY to execute these powers that the sweeping clause, as it has been affectedly called, authorizes the national legislature to pass all NECESSARY and PROPER laws…” (3rd para) [caps Hamilton’s; boldface mine]

In Federalist No. 44, under “The SIXTH and last class” of powers, Madison refers to the necessary and proper clause as a grant of power to Congress by which efficacy is given to all the rest of the powers and that “…Without the SUBSTANCE of this power, the whole Constitution would be a dead letter….” [caps Madison’s; boldface mine].

5 HERE is the CRS Report. The Report exposes as false the assurances that the States would be in control of a convention. The Report says:

“Second . . . Congress has traditionally laid claim to broad responsibilities in connection with a convention, including . . . (4) determining the number and selection process for its delegates; (5) setting internal convention procedures, including formulae for allocation of votes among the states; . . .” (page 4)

“. . . [In previous bills filed in Congress] [a]pportionment of convention delegates among the states was generally set at the formula provided for the electoral college, with each state assigned a number equal to its combined Senate and House delegations. Some bills included the District of Columbia, assigning it three delegates, but others did not include the federal district. . .” (page 37)

“…A related question concerns vote allocation in an Article V Convention. Would delegates vote per capita, or would each state cast a single vote, during the convention’s deliberations, and on the final question of proposing amendments?. . .” [then follows a discussion of different views on this undecided issue] (page 41)

“Article V itself is silent on membership in an Article V Convention, so it is arguable that Congress, in summoning a convention to consider amendments, might choose to include the District of Columbia and U.S. territories as either full members at a convention, or possibly as observers. As noted previously, some versions of the Article V Convention procedures bills introduced in the late 20th century did provide for delegates representing the District of Columbia, although not for U.S. territories . . .” (page 42)

Page 40 of the Report shows there doesn’t seem to be any:

“. . . constitutional prohibition against [U.S.] Senators and Representatives serving as delegates to an Article V Convention. . . “

So! As the CRS Report states on page 27:

Do you see? But by then, it will be too late to stop it.

Furthermore, as all lawyers should know, since the power to call the Convention is delegated to Congress, the supreme Court is unlikely to interfere with Congress’ decisions in this regard because it is a “political question” for Congress alone to decide. See short discussion of “political questions” HERE.

6 See the Minutes of March 4, 1825 of the Board of Visitors of the University of Virginia (Thomas Jefferson & James Madison were present) where they acknowledged the authoritative status of The Federalist Papers and made them one of the texts books for the Law School.