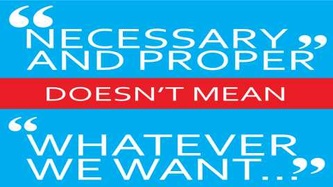 The necessary and proper clause was never intended to expand federal power. At all.

The way most people treat the Constitution’s necessary and proper clause today, we could just as well call it the “whatever is convenient and possible” clause.

But it was never intended to expand federal power one iota. In fact, in Federalist #33, Alexander Hamilton said the operation of the government “would be precisely the same” if the clause never existed.

But Hamilton famously flip-flopped a few years later when he used necessary and proper to justify his national bank. Thomas Jefferson vehemently opposed Hamilton’s bait-and-switch saying that the Constitution only allows the means which are “necessary,” and not just  those which are merely “convenient” for effecting the enumerated powers.

In other words, if an action isn’t absolutely essential for carrying out a specifically delegated power, it isn’t allowed.

This wasn’t merely some legal nitpicking on Jefferson’s part. He understood that accepting Hamilton’s expansive reading of the clause would subvert the entire Constitution, turning the federal government into one of virtually unlimited power.

He went on to write that if such a “latitude of construction” could be applied to any non-enumerated power, it would go to every one, “for there is not one which ingenuity may not torture into a convenience in some instance or other.” He said this would “swallow up all of the delegated powers, and reduce the whole to one power.”

That’s why, Jefferson wrote, the Constitution restrained the government to “necessary means, that is to say, to those means without which the grant of power would be nugatory.”

In short, necessary and proper does not mean anything and everything.