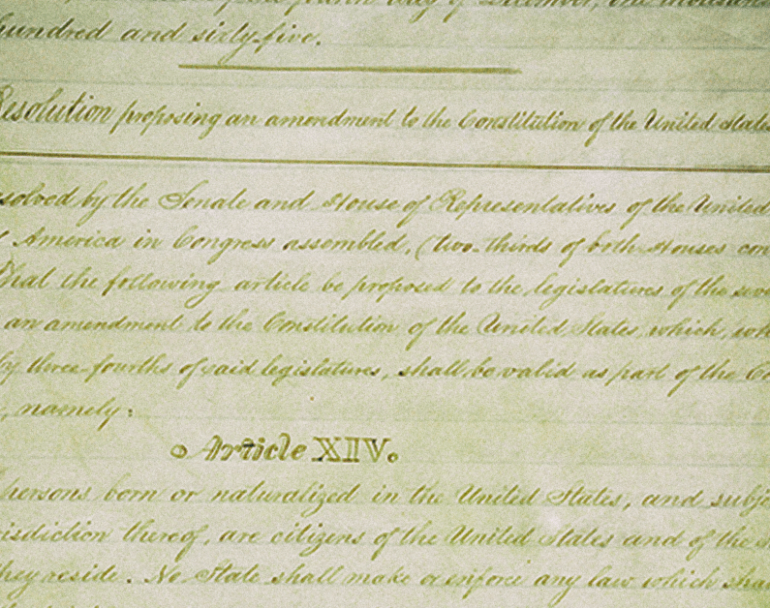 Today in 1868, the United States general government claimed that the 14th Amendment had received the endorsement of the requisite number of states to add it to the Constitution.

Notwithstanding the contention that the 14th Amendment was not properly ratified (I share in the belief that it was not, along with several prominent American historians such as Forrest McDonald), the amendment did not grant the federal government an judicial mechanism to police the states and usurp local authority in regard to powers reserved to each state.

To the contrary, the 14th Amendment’s chief purpose was to affirm the new freedmen the same due process rights shared by their white counterparts, and to constitutionalize the 1866 Civil Rights Act. Congressional Republicans were generally under the impression that had the law passed without the ratification of a new constitutional amendment, the Democrats would summarily repeal the act as soon as they regained power.

Congressional advocates for the amendment described it exactly in such a way. A key proponent of the amendment, West Virginia Representative George Latham said that the Civil Rights Act “covers exactly the same ground as the amendment.” Senator Lyman Trumbull, who made painstaking strides to ensure the bill’s passage, recognized the function of the act to be “a reiteration of the rights as set forth in the Civil Rights Bill.” On several occasions, Trumbull stated that the Civil Rights bill had no application to a state that did not discriminate between its citizens on these grounds. Senator John Sherman of Ohio even remarked that “the first section was an embodiment of the [Civil Rights] Act.”

Regarding the phraseology “equal protection under the law” – if the right was not afforded to a white citizen in 1866, it wasn’t expected to be furnished to anyone according to the amendment’s advocates. Despite this, in modern application the prose has been used to justify a whole host of new “rights” that are usually privileges paid for by one class and distributed to others through governmental force. The notion that the 14th Amendment intended to bring about these privileges through 20th/21st century jurisprudential misapplication is demonstrably ludicrous.

The view that the 14th Amendment “incorporated” the federal bill of rights as limitations against the state governments does not withstand historical scrutiny – the federal courts did not even try to make this claim until more than 55 years after the 14th amendment’s ratification. The definitive narrative that articulates this position is Raoul Berger’s “Government by Judiciary.”

Most obviously, the 14th Amendment did not overturn or override the implicit principle, or the explicit verbiage codified in the 10th Amendment, that all powers that the states did not delegate to the federal government were reserved to the states or the people.

I wrote about the modern tendency to misinterpret the 14th Amendment, and how this phenomenon has acted as a negative force for the cause of liberty (especially in the last decade) in my pamphlet – The 14th Amendment and the Incorporation Doctrine. It is available on Amazon Prime.