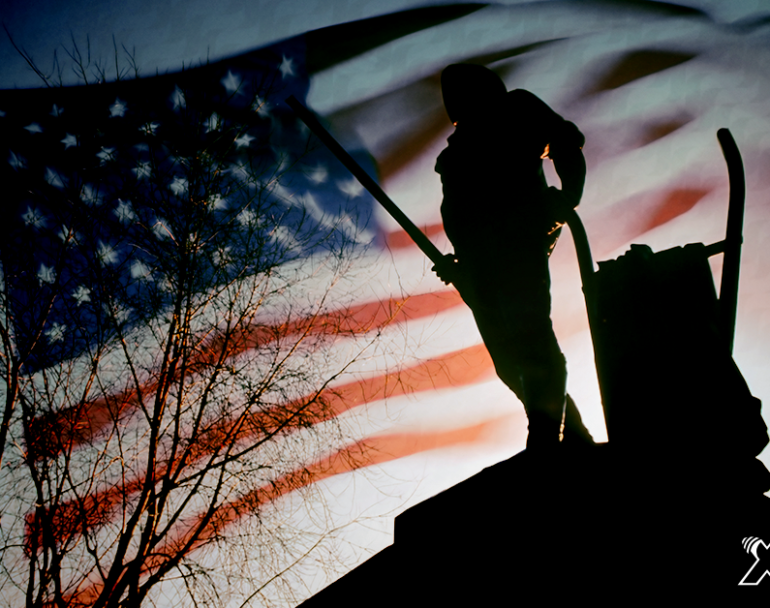 Donald Trump and California Governor Jerry Brown have failed to come to an agreement over how California National Guard troops should be used at the US-Mexico border. Gov. Brown has agreed to send California troops, but has stated he will not allow them to function in an “immigration enforcement” role.

Trump had earlier lauded Brown for sending some California Guard troops, but, it seems that in Brown’s mind, the troops ought to be there only for activities related to drug trafficking and organized crime. Trump then expressed his displeasure with these state-imposed limitations.

The Drudge Report in recent days has played up the conflict between state and federal governments with headlines like “DEFIANT: California deploying 400 troops — but not for immigration enforcement…” and BORDER BATTLE.”

Other publications, like the UK’s Daily Mail report with some degree of surprise over the fact that a governor of a state would refuse to send troops where requested by the US president.

Legally speaking, it’s all much ado about nothing. So long as the president does not federalize National Guard troops for the purposes of a “national emergency,” a state governor, who is the Commander in Chief of the state’s National Guard troops, can refuse to send personnel as requested.

Presidents can, of course, federalize the National Guard and involuntarily deploy them if he wishes, but Trump has not done that — and doing so remains a sensitive political issue when the president intends to use the troops on American soil.

In the case of using National Guard troops on the US side of the US-Mexico border, of course, the President could run up against the Posse Comitatus Act which prohibits using federalized US troops within the United States itself.

As explained by Tim Macarthur, not even that prohibition is a hard and fast rule, but sending federalized US troops to the border would potentially invite legal challenges and political resistance.

1986: When Governors Refused to Send Troops to Latin America

Politically, of course, it’s not shocking that the other border states — Arizona, New Mexico, and Texas — all of which have Republican governors, have all voluntarily sent troops, apparently without limitations imposed by the governors in question.

Jerry Brown, a Democrat, meanwhile, has taken a different approach.

This is not the first time, however, that a state governor has offered resistance to deployment requests or orders from presidents.

During the 1980s, when President Reagan sought to send National Guard troops to Central America, several Democratic governors refused — including Toney Anaya of New Mexico and Joseph Brennan of Maine — to send their troops, triggering a legal battle.

The Christian Science Monitor in 1986 summarized the situation:

Governor Brennan took the lead in January when he refused a federal request to have his Army Guard participate in a road-building exercise in central Honduras. The governors of Ohio and Arizona subsequently turned down requests to send National Guard units from their states to maneuvers, and two other governors said they would not send their Guard to Honduras if they were asked.

Honduras plays a crucial role in Washington’s war against Nicaragua’s Sandinista government. The US-backed contra rebels are based in Honduras, American forces have built airstrips and radar facilities around the country, and US troops have held several large-scale maneuvers in Honduras since 1983.

Alarmed by the governors’ rebellion, the Reagan administration moved to cut the mutiny short. In July, Assistant Secretary of Defense for Reserve Affairs James H. Webb Jr. told a Senate subcommittee that “the governors’ authority has become a vehicle to debate or influence foreign policy.”

The federal statute at the time, however, lent itself to an interpretation in which state governors could exercise some control over where their National Guard troops were sent on training missions in peacetime.

Many of the Nation’s Governors continued to assert greater control over National Guard troops, as reported by the Chicago Tribune at the time:

The nation`s governors do not normally get excited over questions of foreign policy or defense, but they are now asserting their right to have a say over them, at least to the extent that National Guard units are concerned. A resolution adopted at the national governors` conference says that governors alone have the right to decide how guard units will be used and where they will be sent.

Washington still may nationalize guard units in time of war or other emergency. But short of that, the governors claim, in effect, veto power. If the Defense Department wants a state`s National Guard sent on an overseas training mission, the new resolution would require approval of the governor of that state. And the destination had better not be Central America.

This in itself reflected an already greatly-reduced role for governors — compared to power they had over state troops in the 19th century. But, even this small amount of remaining veto power was too much for Rep. C.V. (Sonny) Montgomery (D) of Mississippi who, in response to the governors’ resistance, successfully fought for the passage of new legislation stripping governors of their right to refuse deployment in similar cases:

Montgomery introduced his amendment, arguing that “a few governors just cannot say, `I will not let my guardsmen go to train in a certain part of the world because I do not like the politics of that situation.”

This “Montgomery Amendment,” was later challenged in federal court, and was even struck down at the appellate level. In December 1988, the

U.S. 8th Circuit Court of Appeals ruled 2 to 1 Tuesday that the so-called Montgomery Amendment, taking away a governor’s control over National Guard units, is unconstitutional…The amendment was challenged by Minnesota Gov. Rudy Perpich, who objected to the Defense Department’s ordering Minnesota Guard units to Central America. Governors of other states also have objected, and the states of Massachusetts, Ohio, Colorado, Vermont and Maine supported Minnesota’s lawsuit.

That, unfortunately, was not the end of the matter. By 1990, the George H.W. Bush administration had appealed the case, now known as Perpich v. DoD. In the proceedings, the state of Minnesota argued that “the Founding Fathers feared a large standing army and believed state control could serve as a check on the federal government.” The Bush administration, on the other hand, fought for greater federal control over the states. The Court sided with the federal government, and upheld the Montgomery Amendment. The result was that the states were weakened, yet again, when it came to asserting any control over federal usage of what historically have been regarded as state militias.

The conflict over control of military personnel goes back more than 200 years to the days of the American revolution. Conflicts surrounding the English Civil War led to a well-established legal tradition of avoiding large standing armies while relying on non-professional militias to supply land-based forces. Similar views were adopted by the American Colonists who maintained anti-standing-army views with ever greater enthusiasm than the English themselves.

Many of the debates between Federalists and Anti-Federalists centered around control of state militias, and how much of a standing army the federal government would be allowed.

Up until the American Civil War, the standing army in the United States remained tiny, and most military personnel outside the Navy were state militiamen.

Nowadays, “official” military histories — most of which have been written by military scholars employed by the federal government itself — portray state militias as inept, unimportant, and irrelevant. In fact, state-militia troops were effective and key players in the Mexican War and in numerous frontier engagements during the 19th century.

Moreover, in several key episodes during the 19th century — specifically in Vermont, Connecticut, and Kentucky — state governors explicitly refused to provide troops to the federal government in wartime. Such instances were rare, but the idea that states could control their own military resources independently from the federal government was nevertheless preserved.

Such ideals were summed up by the legislature of Connecticut during the War of 1812 when it declared it would not send state troops as requested: “it must not be forgotten, that the state of Connecticut is a FREE, SOVEREIGN, and INDEPENDENT state; that the United States are a confederacy of states; that we are a confederated and not a consolidated republic.” (emphasis in original)

Even during the Civil War, most Northern military outfits were organized by state governments — although they were subsequently placed under federal command. The part-time soldiers who volunteered in the Civil War in the North — only 8 percent of soldiers were draftees — continued to see themselves as “citizen soldiers” in the style of state militias.

By the early 20th century, however, the ideal of state-level militias, while preserved philosophically, was legally brought under much greater federal control, and the militias became the “National Guard.” According to George J. Stein:

The modern National Guard began with the Dick Act of 1903 which established the several state militias as the militia system of the United States and gave the president the authority to “call up the Guard” in time of war or national security. (1)

This solidified the state militias as essentially an auxiliary of the federal government. This was strengthened even more so with the National Defense Act of 1916 which

Thus, state militias were explicitly expected to be loyal to both federal and state officials simultaneously.

Nevertheless, the idea that state governments exercised some control over National Guard troops, at least in specific circumstances, persisted.

Matters for the federal military were not improved, either, by the unpopular and disastrous Vietnam War in which National Guard troops were largely absent from the conflict. This may have created the impression in some cases that the regular federal military was not quite as flawless as it imagined itself to be.

In any case, by the 1980s, some state governors felt empowered to once again assert some modicum of state control over the state troops who had been increasingly brought under direct federal control.

With the passage and subsequent Court decisions upholding the Montgomery Amendment, however, state control over National Guard troops is currently extremely weak.

The current conflict between California’s governor is very specific to one of the few cases in which a state can refuse a federal request for National Guard troops. Overall, however, the federal takeover of state troops is nearly complete in legal terms. Nowadays, Presidents can call up National Guard troops for lengthy active duty deployments in far-away foreign lands, where no perceptible threat to the United States can be detected. Moreover, this can all be done without any specific declaration of war from Congress. Even the old rules about National Guard troops being called up “in peacetime” have been largely erased in practice.

This, of course, is too bad since for its first century after the Revolution, Americans shows much greater reticence toward a large, centralized military that could be used to satisfy the whims of presidents. Even without easy call-ups for National Guard troops, though, the US’s standing army is now enormous by historical standards, and current National Guard policy is only one factor of many that pave the way for a federal government that is almost continually involved in starting new wars or threatening new wars.

Once upon a time, the ideals behind the idea of locally-controlled state militias offered an important check against centralized executive power, and provided a dose of true federalism as an antidote against ever-growing federal power.