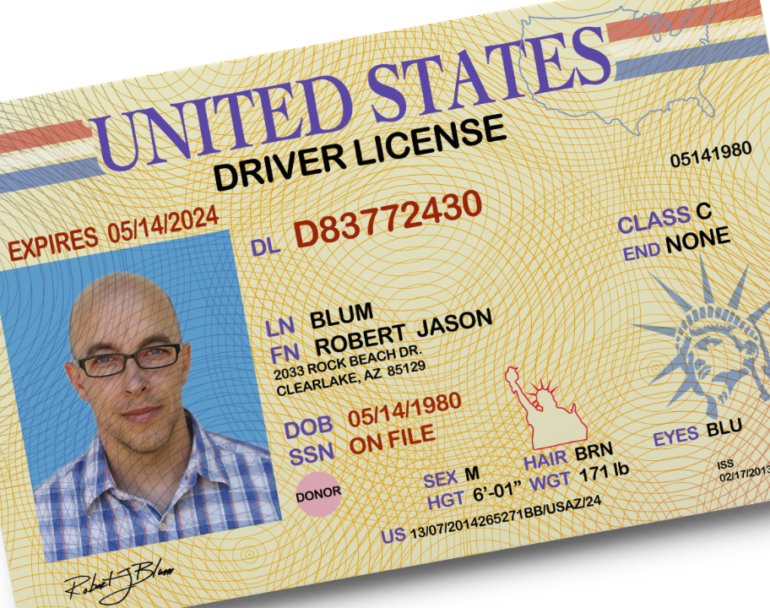 What image just came into your head? Something straight out of Casablanca? A jack-booted, uniform-clad, Nazi stopping someone on the street?

Well, a similar scene is about to be played out in the airports of the United States of America.

What will bring this dystopian drama to life? REAL ID.

The Department of Homeland Security has issued a notice to all travelers that “beginning October 1, 2020 not only must all states be issuing Real ID-compliant licenses or IDs, but individuals must also have visited their state’s driver’s licensing agency and obtained a REAL ID compliant card, or acceptable alternative such as a U.S. passport, if they wish to fly on commercial aircrafts or access federal facilities.”

What happens on that fateful date of October 1, 2020? Again, from DHS:

Federal agencies, including DHS and TSA, may only accept state-issued driver’s licenses and identification cards as identification for purposes of accessing federal facilities — including TSA airport security checkpoints — if the license or card was issued by a REAL ID compliant state in accordance with the REAL ID security standards (meaning the license or card must include the REAL ID compliant star marking).  Enhanced Driver’s Licenses (EDL) issued by Washington, Michigan, Minnesota, New York, and Vermont are considered acceptable alternatives to REAL ID-compliant cards and will also be accepted for official REAL ID purposes. Most EDLs do not contain the star marking and this is acceptable.

For those of you who’ve forgotten what REAL ID is, here’s DHS’s definition:

Constitutionalists will immediately recognize the real problems with REAL ID.

First, the federal government has no authority to mandate such national identification documents. This federal overreach is such an obvious act of usurpation that all state legislators should stand shoulder-to-shoulder in their resistance to such despotic designs. Sadly, few did and we are approaching the day when all the debates will stop, and if anyone wants to travel on an airplane, he must have REAL ID-compliant identification or he will be denied boarding.

Next, there is another aspect of the federal REAL ID program that is perhaps more pernicious than the requirement of carrying paper’s proving you have the government’s permission to travel. This threat to liberty comes through the connection of REAL ID to the growing federal surveillance apparatus.

As reported by the American Institute for Economic Research (AIER):

The Real ID also represents the “last mile” in the ability of the state to track individuals in real time. With various electronic, social media, and cellphone tracking measures, there is always a delay; and one can choose not to use social media, not to own a cellphone, and opt into other methods of extricating oneself from the prying eyes of the NSA or other government agencies. But the Real ID — in particular, coupled with biometrics — fulfills Orwellian conceptions of the total surveillance state.

Expect it, over time, to be leveraged against individuals with outstanding traffic tickets, tax disputes, child or spousal support arrears, or behind on loan payments. Access to national parks and historic sites may be tied to it. Recent proposals pushing compulsory voting are a step closer to realization and enforcement with the establishment of a mandatory government ID card. Census data, drug prescriptions, and even library borrowing choices and habits are likely to eventually be linked with personal data associated with the new ID requirement. And if the Real ID is eventually accessible by the private sector, many individuals with innocuously-tainted personal histories may become effectively unemployable.

How is it possible, you may ask, for the federal government to put so much of human existence under the never-blinking eye of the federal Leviathan?

The answer is that the states for decades have refused to be the barricade to tyranny that the Framers of the Constitution believed they would be. States have been bought by the feds and have been bribed into funding every federal act of tyranny for decades.

Of course, such a relationship violates the principles of federalism and state sovereignty that are built into the Constitution, namely the 10th Amendment and the related anti-commandeering doctrine.

Put simply, anti-commandeering prohibits the federal government from forcing states to participate in any federal program that does not concern “international and interstate matters.”

Writing for the majority in the Printz opinion, the late Justice Antonin Scalia explained:

This separation of the two spheres is one of the Constitution’s structural protections of liberty.

When the federal government assumes powers not explicitly granted to it in the Constitution, it puts the states on the road toward obliteration and citizens on the road to enslavement.

The Founding Fathers understood this. For example, speaking at the convention considering ratification of the new Constitution in New York, part-time Constitutional Convention attendee Alexander Hamilton, a witness at the creation of the Constitution, declared:

I maintain that the word supreme imports no more than this — that the Constitution, and laws made in pursuance thereof, cannot be controlled or defeated by any other law. The acts of the United States, therefore, will be absolutely obligatory as to all the proper objects and powers of the general government … but the laws of Congress are restricted to a certain sphere, and when they depart from this sphere, they are no longer supreme or binding.

There are fewer than 11 months left until REAL ID is enforced. The situation is desperate, and Americans committed to the Constitution and to the goal of making America STATES again must demand that their state legislatures refuse to act as nothing more than subdivisions of the federal empire, just as they are required to do under Article VI of the U.S. Constitution.

I’ll give James Madison the last word on the role states should play in scotching all unconstitutional acts of the federal government. From Federalist, No. 46:

On the other hand, should an unwarrantable measure of the federal government be unpopular in particular States, which would seldom fail to be the case, or even a warrantable measure be so, which may sometimes be the case, the means of opposition to it are powerful and at hand. The disquietude of the people; their repugnance and, perhaps, refusal to co-operate with the officers of the Union; the frowns of the executive magistracy of the State; the embarrassments created by legislative devices, which would often be added on such occasions, would oppose, in any State, difficulties not to be despised; would form, in a large State, very serious impediments; and where the sentiments of several adjoining States happened to be in unison, would present obstructions which the federal government would hardly be willing to encounter.