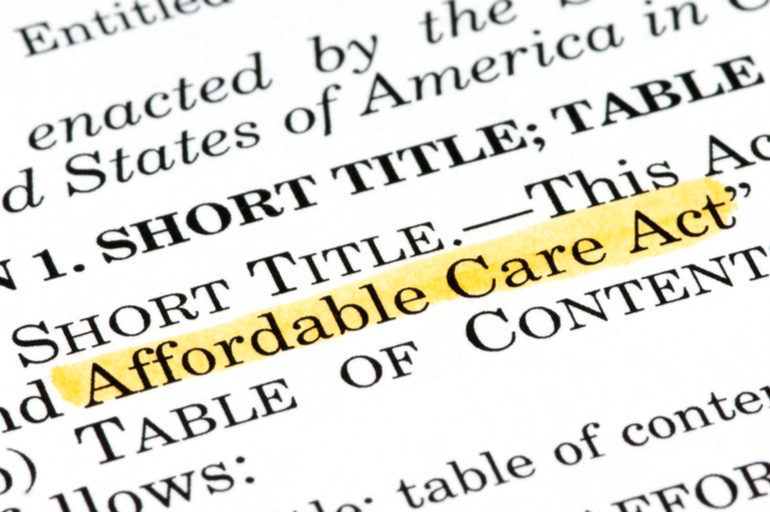 As one of its first acts, the new Democrat-controlled House of Representatives has intervened in the constitutional lawsuit in which Texas federal district-court judge Reed O’Connor, widely denounced as a “conservative judge” appointed by President George W. Bush, found the entire Affordable Care Act (ACA or Obamacare) to be unconstitutional. However, Judge O’Connor, unlike the several federal judges who have ruled against the Trump administration in immigration cases, did not issue an injunction against the continuing operation and enforcement of the Act. The case is now under appeal to the Fifth Circuit Court of Appeals.

Since Judge O’Connor’s ruling, there have been few if any efforts to point out O’Connor’s reasoning or to place the case in its necessary background and context. His decision is based not only on the relevant acts of Congress but also on the tortured ruling of the Supreme Court in NFIB v. Sebelius (2012), the landmark Obamacare decision aggrandizing the power of the federal government and Chief Justice Roberts’ endorsement of the completion of the Great Society. And in light of the Democrats’ apparently successful emphasis on health care in the 2018 elections and with not just the socialist wing of their party promoting “Medicaid for all,” healthcare as a national policy is as prominent a contemporary political issue as there is. And it is all the more topical in light of the regular expostulations about how Justice Kavanaugh will vote in major cases, together with the daily reports concerning the health of Justice Ginsburg.

The ACA was and is unique in the history of the creation of major federal programs as something that was not enacted by legislative and political consensus. Unlike Social Security, Medicare, and Medicaid, which were passed into law with overwhelming votes, the Affordable Care Act was squeaked into law by a strictly partisan margin, with the entire Republican party in both the House and the Senate voting against. The bill passed the House by a vote of only 219-212.

Before the ACA went into effect, twenty states sued contending that while Article I, Section Eight of the Constitution gives the Congress the power to “regulate commerce . . . among the several states,” that regulatory power does not include the additional power to order individual Americans to affirmatively engage in commerce. The reference was to the provision of the ACA, the “Individual Mandate,” that required all Americans not enrolled in health insurance plans to contract for health insurance on their own or pay a “penalty” for not doing so. Those suing argued the same principle of coercion in opposing the “Medicaid Expansion,” whereby states that refused to participate in the ACA’s broadening of Medicaid coverage could have their entire Medicaid funding eliminated, Medicaid being a program jointly administered and funded by both the states and the federal government. In NFIB v. Sebelius (2012), the Supreme Court overturned the Medicaid expansion but upheld the Individual Mandate.

Among landmark Supreme Court cases about landmark federal government programs, NFIB is unique. Chief Justice Roberts, writing for the Court, salvaged the Individual Mandate against the dissent of Justices Scalia, Thomas, Alito, and Kennedy but with the concurrence of Justices Ginsburg, Sotomayor, Kagan, and Breyer. Although agreeing with the dissenters that Congress could not give such an order to individual American as a constitutional “regulation” of commerce, Roberts changed the subject by holding that the enacted “penalty” for individual citizen’s failing to contract for health insurance was effectively the Mandate itself and was a constitutional “tax” under the Congress’ power “to lay and collect taxes.”

None of the other eight justices agreed with Roberts. That is, there is a landmark Supreme Court decision regarding the fundamental scope of the constitutional power of the federal government that is based on the opinion of only one justice. Roberts said that even though the Congress called it a “penalty,” it was “fairly possible” to treat it as a tax, that it “functioned like a tax,” that it will bring in “considerable revenue,” and thus it “may for constitutional purposes be considered a tax.” Overall, then, he essentially ruled that Article I, Section 8, of the Constitution has no unity and that the power to tax is in opposition to the power to regulate commerce.

Only in the first three lines of her long concurrence/dissent did Justice Ginsburg bother to mention Roberts’ tax conclusion, and that mention was for the pragmatic purpose of cobbling together the needed majority for upholding the Individual Mandate. Otherwise, her long opinion justified the ACA, its Individual Mandate, and the Medicaid Expansion under the Commerce Clause, the Spending Clause, the Necessary And Proper Clause, and was, in general, a treatise on how the Constitution does not stand in the way of unlimited centralized government. Despite “concurring” with Roberts on the tax issue, she criticized his opinion again and again, calling it in various places, “spurious,” “newly minted,” a “novel constraint,” with “multiple flaws.”

Justice Scalia, for the four dissenters, spoke in terms of a unified Constitution, and specifically about “the constitutional power to tax and spend for the general welfare” and the division in the Constitution between federal and state power. He pointed out that a tax is different from a penalty, that the law enacted by Congress uses the word “penalty,” and that there was no precedent for characterizing a penalty “for violation of the law” as a tax. “To say that the Individual Mandate merely imposes a tax is not to interpret the statute but to rewrite it,” he concluded.

What if the “Tax” Is Eliminated?

In 2017, the Congress, by means of a budget reconciliation bill, zeroed out the “penalty”/“tax,” while retaining the statutory language providing for it. That change is scheduled to go into effect this year. Nineteen states have sued bringing up again the constitutionality of the ACA

Judge O’Connor’s ruling has been subject to harsh criticism on the Right and on the Left. Who said bipartisanship is dead?

Law professors Jonathan Adler and Abbe Gluck, “experts in the field of statutory law” who were previously opponents in the two Supreme Court cases on Obamacare, have called the decision a “sad day for the rule of law.” Among their criticisms is that Judge O’Connor, in declaring that the Individual Mandate unconstitutional, should not have proceeded, as he did, to then declare the whole ACA unconstitutional. They emphatically cite the “established legal principle called severability,” by which a court need not overturn a whole statute if it finds one provision of the statute unconstitutional.

However, the “established” legal doctrine of severability is not in the Constitution itself, nor is the doctrine self-enforcing. And as it happens, it has a history in judicial consideration of the constitutionality of Obamacare. In NFIB, Chief Justice Roberts concluded that the Medicaid Expansion provision could be severed without affecting the rest of the ACA. In purporting to follow the principles of severability, Roberts spoke of what Congress “would have intended . . . would have wanted . . . it is evident . . . we are confident . . . it is fair to say . . . we do not believe.” Such judgment calls and subjective language are example of an “established” legal doctrine?

The same professors also criticize Judge O’Connor for not giving sufficient importance to the act of the Congress in 2017, which by zeroing out the Individual Mandate’s “penalty” (“tax”) made it clear, they argue, that the whole ACA itself could stand without the penalty. But that begs the issue of whether the whole ACA is still unconstitutional, even with Congress having had two cracks at it. Are the professors calling into question the principle of judicial review itself?

In addition, it has been argued that the decision is unnecessary because the ACA is going on quite nicely without the individual mandate. But what if the Congress were to re-fund the still-existing mandate? Would there be a constitutional case then? And that is not a legal argument.

Overall, Judge O’Connor’s reasoning and conclusions were simple and commonsensical, meaning that any citizen, not just constitutional lawyers, could understand them. But that may not be permissible in constitutional law today.