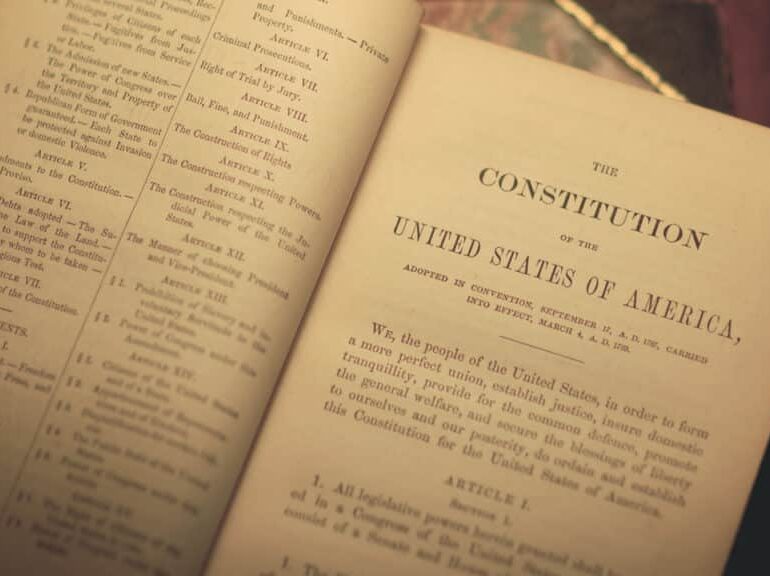 Although the word Federalism does not appear in the Constitution, federalism is the best practice, it is one of the most important and innovative concepts in it.  When the Constitution was adopted in 1789, a federal republic, not a democracy, was established. As future president James Madison wrote in The  Federalist, No. 10: “Democracies have ever been spectacles of turbulence and contention; have ever been found incompatible with personal security or the rights of property; and have in general been as short in their lives as they have been violent in their deaths.”

Federalism is the division of power between the national and state governments. Articles I through III of the Constitution delegate certain powers to the three branches of the national government. The Ninth and Tenth Amendments make it clear that all rights and powers not delegated to the federal government are retained by the people and the states.

The states of the United States of America created the national government — not the other way around. The states had been in existence as independent, sovereign colonies for many, many years. Only Georgia (1732) among the original 13 colonies was not established in the 1600s.

The Declaration of Independence (1776) states:

We, therefore, the Representatives of the united States of America, in General Congress, Assembled, appealing to the Supreme Judge of the world for the rectitude of our intentions, do, in the Name, and by Authority of the good People of these Colonies, solemnly publish and declare, That these united Colonies are, and of Right ought to be Free and Independent States.

This status continued when the states adopted the Articles of Confederation (1781): “Article II. Each state retains its sovereignty, freedom, and independence, and every Power, Jurisdiction, and right, which is not by this confederation expressly delegated to the United States, in Congress assembled.” And most importantly, this status persisted after the Constitution was adopted. The Constitution refers to the United States in the plural in Article III, Section 3, Paragraph 1: “Treason against the United States, shall consist only in levying War against them, or in adhering to their Enemies, giving them Aid and Comfort.”

The best explanation of American-style federalism is that given by Madison in The Federalist, No. 45:

The powers delegated by the proposed Constitution to the Federal Government, are few and defined. Those which are to remain in the State Governments are numerous and indefinite. The former will be exercised principally on external objects, as war, peace, negotiation, and foreign commerce; with which last the power of taxation will for the most part be connected. The powers reserved to the several States will extend to all the objects, which, in the ordinary course of affairs, concern the lives, liberties and properties of the people; and the internal order, improvement, and prosperity of the State.

Since as far back as the New Deal, liberals and progressives have been derisive of federalism and supportive of increasing the spending, size, and scope of the federal government.

The U.S. federal government has become a monstrosity. With an annual budget of over $5 trillion and a national debt of over $28 trillion, federal spending is out of control. According to the nonpartisan Congressional Budget Office (CBO), federal debt now exceeds GDP. Even before the COVID-19 “pandemic” relief efforts, the federal government was spending over $11 billion per day, $468 million per hour, $7.8 million per minute, or $130,000 per second.

According to the latest report on the federal workforce by the Congressional Research Service, over 2.1 million federal civilian employees work at these departments, independent agencies, and corporations, not counting the post office, which employs about 580,000 people, and not counting the legislative and judicial branches, which employ another 64,000 people. And then there are the 1.4 million active-duty uniformed military personnel — most of whom are not actively engaged in defending the United States by securing U.S. borders, protecting U.S. soil, guarding U.S. shores, patrolling U.S. coasts, and enforcing no-fly zones over U.S. skies. They are too busy doing these things in other countries, and being the world’s policemen, firemen, and social workers.

Although it makes sense that tax evasion, mail fraud, and counterfeiting are federal crimes, the federal government has categorized over 4,000 actions as federal crimes, including things such as domestic assault by a habitual offender, drug possession, carjacking, obscenity, animal cruelty, and art theft from a museum. The exact number of federal crimes is unknown. As the American Bar Association’s Task Force on the Federalization of Crime concluded a few years ago: “So large is the present body of federal criminal law that there is no conveniently accessible, complete list of federal crimes.”

The scope of the federal government is without limit. There is no area of American life that the federal government does not have an impact on. The federal government reads our e-mails, listens to our phone conversations, tracks our bank deposits and withdrawals, regulates the size of the holes in our Swiss cheese, gropes us and forces us to throw away tubes of toothpaste over 3.4 ounces before we can board airplanes, regulates the amount of water that toilets are allowed to flush, and owns more than 40 percent of the land in nine states. As Charlotte Twight wrote almost 20 years ago in Dependent on DC: The Rise of Federal Control Over the Lives of Ordinary Americans:

Growing federal power-driven by legislation, validated by Supreme Court decisions, and accelerated by presidential ambition — has eroded the rule of law in our nation, leaving almost no activity that the central government cannot at its discretion regulate, manipulate, or prohibit. A constitutional counterrevolution has occurred in America — one so profound that few today can imagine Americans free of dependence on government.

And this was all before the “pandemic.”

Earlier this year, the CDC even sought to control how Americans watched the Super Bowl. Sports junkies were reminded to wear masks, maintain social distancing, wash their hands often, only have small gatherings, and bring their own “food, drinks, plates, cups, utensils, and condiment packets” to parties, if they dare go to one. The CDC even warned Americans against “shouting, cheering loudly, or singing” while they watched they game.

The United States is far removed from the limited government of the Founders, and has been for some time. The liberties of the American people are in peril as never before. But this is not just because of the spending, size, and scope of the federal government. As we especially saw last year throughout the COVID-19 “pandemic,” the state governments — mainly the ones headed by Democratic governors, but not exclusively — can be authoritarian, tyrannical, and even totalitarian.

Many Americans took the CDC’s paternalistic and draconian “guidelines” as law. But in some states, government officials turned the guidelines into de facto laws. Holiday gatherings in California were restricted to no more than three households, had to be outside, had to have enough space so that everyone could stay six feet apart, had to use single-serve disposable containers, and were restricted to two hours.

In Oregon, no more than six people could gather in one home, and they could not represent more than two households. Church funeral services were limited to 25 people. Restaurants could only offer take-out.

The city of Philadelphia banned all indoor dining at restaurants and indoor gatherings of any size, public or private, of people from different households.

The mayor of Tampa, Florida, was furious that thousands of people ignored the city’s mask and social-distancing mandates while celebrating the Tampa Bay Buccaneers’ Super Bowl win. Some cities shut down all indoor dining for many months in 2020.

According to the National Restaurant Association, more than 110,000 restaurants have permanently closed in the United States because of state government restrictions due to the “pandemic.”

There are a number of steps of federalism that have been proposed to help restore the constitutional federal republic of the Founders in which liberty was proclaimed throughout the land. Since the advent of the Biden administration, the nullification of unconstitutional federal actions by the states has been increasingly mentioned. Term limits for members of Congress are a perennial step that some have proposed, even though voters can remove anyone from Congress at any election. Some have called for a new constitutional convention to propose additional amendments to the Constitution, as if Congress actually follows the Constitution in the first place. Others say that we just need to elect more Republicans to Congress, even though congressional Republicans rarely reverse the bad policies enacted by Democrats and often enact bad policies of their own. But in spite of the problems with the governments of the several states, federalism is still the best step to reining in the out-of-control federal government and restoring the liberties of the American people. And what a big step it is. Let’s look at some key issues through the lens of federalism.

Education: The Constitution nowhere authorizes the federal government to have anything to do with education or to pay for anyone’s education. This means not only no Department of Education, but no Higher Education Act, no Elementary and Secondary Education Act, no bilingual-education or special-education mandates, no math and science initiatives, no desegregation orders, no Pell Grants, no student loans, no research grants to colleges, no scholarships, no school accreditation, no anti-discrimination policies, no standardized-testing requirements, no Common Core standards, no Race to the Top funds, no No Child Left Behind Act, and no Head Start funding. If there is to be any government involvement in education, it must be limited to the state level.

Welfare: The Constitution nowhere authorizes the federal government to provide welfare in cash or in kind, feed anyone, have a safety net, fight poverty, or help the sick, aged, disadvantaged, underprivileged, or disabled. This means no Supplemental Nutrition Assistance Program (SNAP, formerly known as food stamps), no Women, Infants, and Children (WIC), no Temporary Assistance to Needy Families (TANF), no Low Income Home Energy Assistance Program (LIHEAP), no Special Milk Program (SMP), no refugee assistance programs, no job training programs, no Commodity Supplemental Food Program (CSFP), no Community Development Block Grants (CDBG), no housing-assistance programs, no homeless-assistance grants, no family-planning programs, no adult basic-education grants, no legal-services block grants, no Healthy Marriage and Responsible Fatherhood (HMRF) initiative, and no refundable tax credits. If there are to be government welfare programs, they must be provided only on the state level.

Subsidies: The Constitution nowhere authorizes the federal government to provide subsidies for art, culture, science, housing, agriculture, the humanities, or any particular segment of the economy or society. This means that there is no justification for the existence of the National Endowment for the Arts (NEA), the National Endowment for the Humanities (NEA), section 8 housing vouchers, farm bills, or the National Science Foundation (NSF). If there are to be government subsidies for these things, they must be provided only on the state level.

Now, none of this means that the states should have a drug war, should provide or pay for education, should provide welfare, should subsidize anything, or should provide or pay for healthcare, this is not federalism. It simply means that the federal government should have nothing to do with any of these things, since they are not among the enumerated powers of the national government and, under our federal system, are retained by the states or the people. Federalism is not some policy proposal issued by a Republican politician or conservative think tank. It is part and parcel of the very fabric of the Constitution and the limited government established by the Founders.

Although the state governments have their problems, a strict adherence to federalism is the best step to reining in the out-of-control federal government and restoring the liberties of the American people and the best practices of federalism.