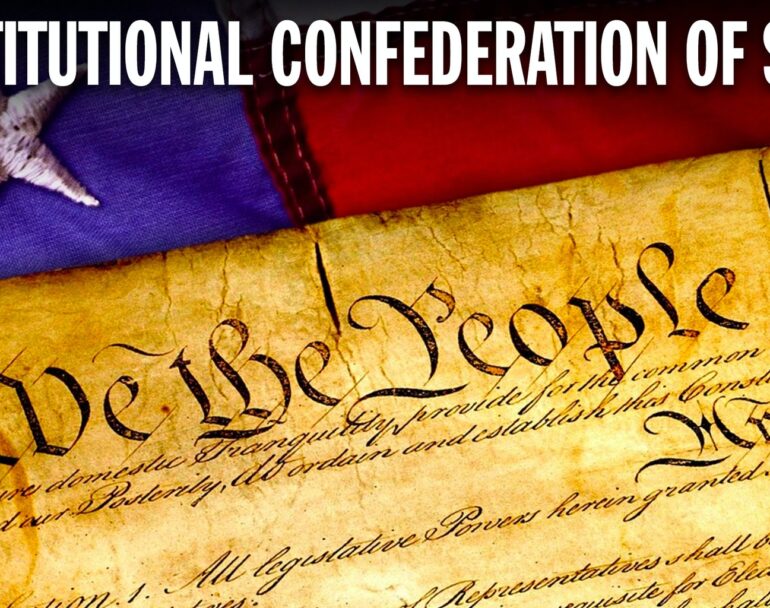 It Is Time for a Constitutional Confederation of States

“The crisis is arrived when we must assert our rights, or submit to every imposition, that can be heaped upon us, till custom and use shall make us as tame and abject slaves.” —George Washington (1774)

Predictably, the Supreme Court refused to take up the Texas lawsuit against four states for illegally changing voting rules. This suit was very different in nature from those filed by Donald Trump’s legal team. The Texas suit stressed that those changes were not authorized by the respective state legislatures and that they clearly influenced the election outcome, which, by extension, clearly affects every state and every citizen.

For the record, refusing to take the case based on “lack of standing,” meaning the Court determined the state of Texas did not have direct legal standing to bring the suit, is very different than declaring the claims for the Texas suit don’t have merit. They most certainly did and do have merit. Apparently, all the leftist claims that Amy Coney Barrett was going to rubber-stamp another term for President Trump were what we knew they were — fake news.

Now that the Electoral College has met to declare Joe Biden the winner of the 2020 election, if he makes it to January 20th, he will be sworn in as the next president — and then the real candidate, Kamala Harris, can soon thereafter step in.

Laughably, Biden declared, “Faith in our institutions held. The integrity of our elections remains intact.” Even more laughable, Biden is now touting the restoration of ethics to the executive branch.

So, what are we to do now when the Biden-Harris regime becomes an oppressive Harris regime — which it will — and then Harris adopts the far-left, constitutionally abrogating policies of her cadres of Demo “progressives”?

“The Supreme Court, in tossing the Texas lawsuit that was joined by seventeen states and 106 members of Congress, has decreed that a state can take unconstitutional actions and violate its own election law. Resulting in damaging effects on other states that abide by the law, while the guilty state suffers no consequences. This decision establishes a precedent that says states can violate the US Constitution and not be held accountable. This decision will have far-reaching ramifications for the future of our constitutional republic.”

West then posited, “Perhaps law-abiding states should bond together and form a Union of states that will abide by the Constitution.”

Of course, the Leftmedia propagandists pounced on West’s proposal, insisting it was “secessionist” — you know, like a southern Black man is calling for the South to rise again.

West’s remark is obviously not about secession, much less revolution. It’s about the establishment of an alliance of states “bonded together” by a commitment to “abide by the Constitution.”

This involves a reaffirmation of our Constitution in states attempting to give sanctuary to American Liberty and Rule of Law as opposed to the Democrat Party effort to undermine our Constitution with the rule of men, the terminus of which is, irrevocably, tyranny.

On that note, let me reintroduce a concept I proposed 20 years ago as part of what is outlined in our Patriot’s Primer on American Liberty.

That concept: “A Constitutional Confederation of States.”

My proposal, then as now, would be to pursue a grassroots-inspired Constitutional Confederation — an alliance of those states that are not urban-leftist mob-ruled, whose delegations could assemble to affirm the authority of our Constitution in order to provide broader sanctuary for the Rule of Law it enshrines — in effect, to re-ratify our Constitution and reaffirm its supremacy as law.

If we’re to fully restore Liberty and the integrity of our Constitution, we must do so from the bottom up — a groundswell from grassroots Americans if it is to be enduring. We must start at our foundation, speaking with one disciplined, determined, and unified voice toward one primary objective: The reestablishment of Rule of Law.

“Constitutional Confederation” is a more complicated sanctuary concept than those alliances being formed to defend the Second Amendment, but a good starting place would be with those organizational alliances because their mission is, ultimately, the same: protection of the Constitution — 2A being what Justice Joseph Story called the “palladium of the Liberties of the Republic.”

An initial objective could be to obtain resolutions from the 27 Republican governors and county resolutions in the remaining 23 states with statist Democrat governors.

The initial purpose would be to educate our fellow citizens on the point that our Constitution established a Republic and is intended to reflect the consent of the governed — a nation governed by Rule of Law. Article IV, Section 4 states unambiguously, “The United States shall guarantee to every state in this union a republican form of government.”

A Confederation of States should rise to demand no less than the standard our Founders’ set forth in our Constitution and affirmed in its Bill of Rights as “Article the Tenth,” the Tenth Amendment: “The powers not delegated to the United States by the Constitution, nor prohibited by it to the States, are reserved to the States respectively, or to the people.”

Our Founders understood that Rule of Law would be the foundational guarantee to protect and sustain Liberty for their generation and those of their posterity. Consequently, they prescribed that all elected officials be bound by sacred oath “to support and defend” our Constitution.

But many in the U.S. House and Senate wantonly and constantly violate their oaths. They have forsaken those oaths and instead focus on redistributing others’ wealth to their special-interest constituencies in order to perpetuate their own offices. We can be certain that when the number of constituents who vote for their income and provisions outnumber those who work for their income and provisions, our Republic will be lost.

The time has come to inquire with a unified voice: Because there is no explicit constitutional authority for many of the laws and regulations enacted by the legislative and judicial branches, and enforced by the central government, then by what authority do those entities make such laws and collect taxes to fund unconstitutional laws and regulations? Where there is no authority, this certainly constitutes “taxation without representation.” Thus, what should be the consequence for such dereliction?

A Constitutional Confederation (as opposed to a Constitutional Convention, which poses many hazards to Liberty) would have the purpose of re-adopting our authentic Constitution as originally ratified, with amendments attached as prescribed. This confederated alliance would thus reject the so-called “living constitution” that has now undermined our actual Constitution almost beyond recognition — accelerated by judicial diktats from the “despotic branch” of which Thomas Jefferson so presciently warned.

Although Article V of our Constitution provides the people with an authentic means for amendment, activist jurists and regressive lawmakers have altered that founding convention well beyond any semblance of its original intent. They have used the courts, legislation, and regulation to greatly expand the powers of the central government according to their decrees.

The states re-ratifying as members of the Constitutional Confederation would determine an orderly plan to withdraw from the plethora of unconstitutional diktats, regulations, and targeted taxes (Bills of Attainder) that are in clear violation of Tenth Amendment Federalism as defined in The Federalist Papers and prescribed when each state first ratified our Constitution. This serious movement to restore the authority of our Constitution is a genuine act in support of “We the People” rather than an act of insurrection. This is a proposal for restoration, not revolution, seeded in the Second “Tea Party” Revolt a decade ago.

This proposal could generate national momentum and would most assuredly generate a LOT of heartburn for the socialist Democrats and their legions of useful idiots. The notion of the unalienable Rights of Man are anathema to the Left’s statist worldview and objective of total state authority.

“It is natural to man to indulge in the illusions of hope. We are apt to shut our eyes against a painful truth — and listen to the song of that syren. … For my part, whatever anguish of spirit it might cost, I am willing to know the whole truth; to know the worst, and to provide for it.”

It is time to fully object to the degraded state of our Constitution and reject any further degradation by way of “illusions of hope” that these depredations will magically repair themselves. It is the responsibility of our generation of Patriots to provide for its revitalization. In the spirit of Thomas Paine’s 1776 assertion, “If there must be trouble, let it be in my day, that my child may have peace,” so, too, it should be in our day.

Why mention this now? First, because the 2A sanctuary movement is endeavoring to do in Virginia and other states precisely what a Constitutional Confederation can do across our entire nation, starting with resolutions in support of such a confederation.

And second, because for the last four years, we’ve witnessed deep-state operatives endeavoring to undermine our Constitution by undermining the duly elected president of the United States. They did so first by attempting a coup d’état to take down Trump without firing a shot. When that failed, they undertook an impeachment charade also originating with one deep-state operative, whose primary handlers were Adam Schiff and Chuck Schumer — the latter of whom then oversaw the prosecution of Trump in the Senate.

We can all agree that our nation is besieged with BIG and systemic problems. And I would submit that nearly every major problem facing our country today can trace its roots to lawless extraconstitutional legislation and policies. This notion of a Constitutional Confederation of States is representative of the BIG ideas that need to be considered in order to ensure future generations of Americans are not beset with the current degraded state of our Constitution. This proposal is entirely consistent with our Patriot Mission to extend Liberty to the next generation.

“There are no easy answers, but there are simple answers. We must have the courage to do what we know is morally right. … You and I have a rendezvous with destiny. We will preserve for our children this, the last best hope of man on earth, or we will sentence them to take the last step into a thousand years of darkness.”

Having known Allen West for almost 20 years, I know for sure that he is, and has always been, dedicated first and foremost to defending Liberty today in order to extend its blessing to the next generation. Since our inception, that has, likewise, been the mission of your Patriot Post team.

P.S. Patriots, the most cost-effective investment you can make to ensure the future of Liberty is to support The Patriot Post. We are the Web’s most influential grassroots journal promoting freedom and challenging the Leftmedia narrative. We rely 100% on the voluntary financial support of Patriots — people like you. Please support The Patriot Fund’s Year-End Campaign today. Thank you.

Please join us in prayer for our nation’s Military Patriots standing in harm’s way in defense of Liberty, for their families, and for our nation’s First Responders. We also ask prayer for your Patriot team, and our mission to, first and foremost, support and defend our Republic’s Founding Principles of Liberty, and to ignite the fires of freedom in the hearts and minds of our countrymen.