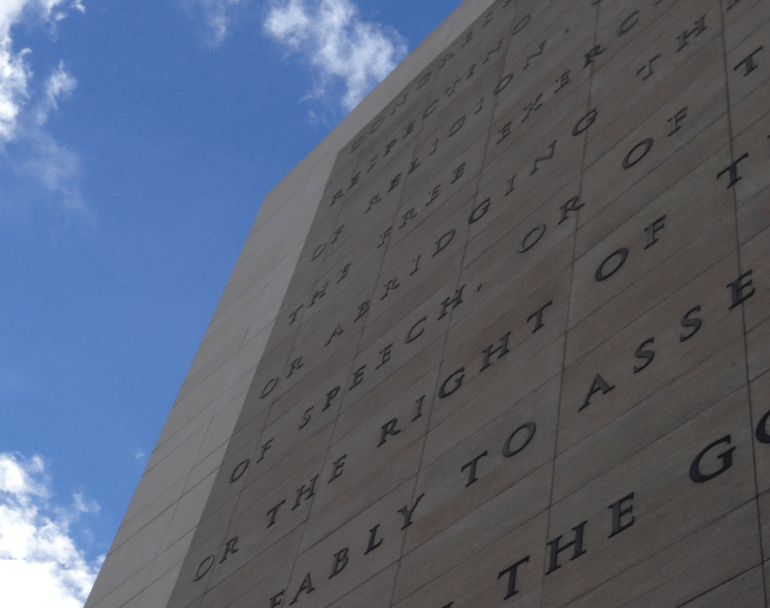 Conservatives are cheering the recent opinion by the United States Supreme Court allowing a cross to remain on public land. But should they be?

In 1918, residents of Prince George’s County, Maryland, formed a committee for the purpose of erecting a memorial for the country’s soldiers who fell in World War I. When the committee ran out of funds, the American Legion completed the memorial in 1925. The cross stands on a piece of land owned by the State of Maryland along the National Defense Highway.

In 2014, the American Humanist Association filed suit in federal court, claiming the costs associated with maintaining the memorial violated the Establishment Clause of the First Amendment. The District Court granted summary judgment for the American Legion, citing the 3-part test in Lemon v. Kurtzman, 403 U. S. 602 (any alleged violation of the Establishment Clause must be shown to have a secular purpose, and involve neither an establishment or infringement of any particular religion, nor involve excessive entanglement on the part of the government) and Justice Breyer’s analysis in Van Orden v. Perry, 545 U. S. 677, a case involving the Ten Commandments.

The cross is described in news accounts as being located on “public land” and supported by “taxpayer” funds. Absent is the clarification of “public land,” which raises the issue — is the land owned by the general government or is this a local matter?

The syllabus section of the Court’s opinion says that in 1961, the Maryland-National Capital Park and Planning Commission (Commission) acquired the Cross and the land upon which it sits.

On its web site, the commission describes itself as follows:

“…a bi-county agency empowered by the State of Maryland in 1927 to acquire, develop, maintain and administer a regional system of parks within the Montgomery and Prince George’s Counties, and to provide land use planning for the physical development of Prince George’s and Montgomery counties.”

A monument erected in 1925 to honor fallen World War I veterans is at the center of this controversy, and the arguments focus on opposing sides of Constitutional guarantees set forth in the First Amendment – specifically, the Establishment Clause, which states that “Congress shall make no law respecting an establishment of religion.”

Clearly, there is no federal involvement at issue here. Congress didn’t plan the cross. The federal government neither erected nor provided funding for the maintenance of the cross. Yet the Establishment Clause is claimed as the “Constitutional” issue rendering this local monument ripe for review by the highest court in the Land. Is this was the founders intended?

Is this something to which the States consented? The answer is unequivocally, “No!”

As James Madison explained in Federalist 45:

“The powers delegated by the proposed Constitution to the federal government, are few and defined. Those which are to remain in the state governments are numerous and indefinite…The powers reserved to the several states will…concern the lives, liberties, and properties of the people, and the internal order, improvement, and prosperity of the state.”

Throughout the Philadelphia Convention, Madison pushed for a federal “negative” (veto power) over state laws. This idea was rejected on each attempt. When a number of states insisted on adding a Bill of Rights as a condition of ratification, he argued against it saying, along with Alexander Hamilton and James Wilson, among others, that it would be redundant since the “general” government had only the powers specifically enumerated.

Justice Alito mentions passingly to the fact that the Establishment Clause only applied to the Federal Government at the time it was ratified, but glosses over this de facto modification of the Constitution by simply stating that changed after their ruling in Everson v. Board of Ed. of Ewing 330 U. S. 1 (1947).

In effect, the Court amended the Constitution.

The Constitution provides for amendments, and the process for doing so is set forth in Article V; Congress or the States can propose an amendment and ¾ of the States must support its ratification. Justice Alito is acknowledging that the Supreme Court can hold its own Constitutional convention without inviting the States to weigh in.

This interpretation by the Court is problematic, as well as unhistorical. The 39th Congress, which proposed the amendment, did not debate the issue of “incorporation,” and no such premise had been adhered to in the preceding years. But, by 1925 the “progressive” era was in full swing and the Supreme Court was well on its way toward inflicting a complete rewrite of the Constitution onto the States and the American people, thus diminishing the “separation of powers” between the States and the “general” government. This made-up doctrine has served the chief mechanism through which a “one-size-fits-all” form of government, with all rights and powers emanating from Washington, D.C., has arisen.

The general government was prohibited from making laws regarding religion by virtue of said power not being enumerated in Article I section 8. Justification for federal review of a State issue is centered around misapplication of the SCOTUS jurisdiction, namely the statement in Article III that “…judicial power (of the federal courts) shall extend to all cases…arising under this Constitution…” What is the result of this interpretation? It means that all one has to do to circumvent State policy is to call the matter a “Constitutional question,” file in federal court, and ignore the Tenth Amendment, the foundation of the Constitution, according to Thomas Jefferson.

This explains the long-winded discussion of the Establishment Clause, the standards set forth in the Lemon Test, the historical context of the creation of the cross and how all of the above is to be decided, none of the above referring to local standards, just a “national” examination thereof.

What Congress cannot do via legislative authority, the Supreme Court can and does by calling the matter a “Constitutional” question. Clearly, this is an end run around the limitations intended by the ratifying States. While the founders would have approved the interpretation of the Establishment Clause as it pertains to the outcome, the problem is not the outcome, but the jurisdiction; two justices would have been fine with having crosses removed across any public land across the continent. Had they represented the majority, then the outcome would certainly have been in conflict with the intent of the Establishment Clause. Seeking redress in the federal judiciary for local matters runs the significant risk that liberty shall not be preserved, but destroyed.

State sovereignty and decentralized decision-making, not the federal judiciary, were intended to be the vanguard of our liberty. By ignoring the purpose of the Bill of Rights and the history of the proposal and ratification debates surrounding the Fourteenth Amendment, our republican system of government has been systematically dismantled; the result is a “one-size-fits-all” system, where all rights and powers must emanate from Washington, D.C. The general government, intended to be limited in nature, has assumed sovereignty of its own, the States now rendered mere subsidiaries. The war for American independence was fought for the right to self-govern, to have issues decided by the people through their locally-elected representatives. By acquiescing to the overreaching national government into areas in which powers were never delegated, we have turned our backs on principles such as State sovereignty and consent of the governed. We have surrendered our revolutionary legacy.