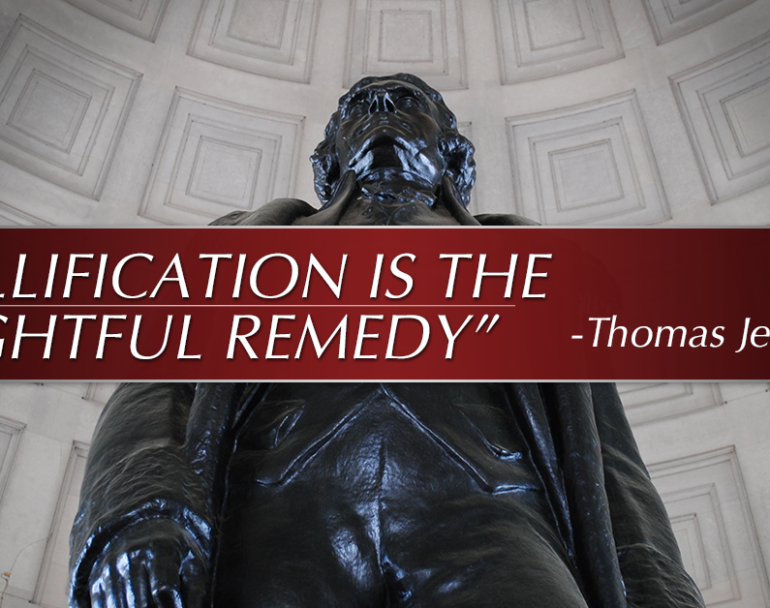 Now on some level, we shouldn’t care: resisting violent people who claim the right to expropriate you and force you around is a natural right, and doesn’t rely on any parchment guarantee.

But I for one prefer to address my opponents from every angle I can, including their own.

These days we’re seeing a lot of newspaper columns condemning the idea of state nullification of unconstitutional federal laws. A common claim is that nullification is “unconstitutional.” I’ve addressed this claim in bits and pieces elsewhere, but I figured I’d write up one post I can use to counter this argument once and for all.

The most common claim, which one hears quite a bit from law professors (this is not meant as a compliment), is that the Supremacy Clause precludes nullification. “Federal law trumps state law” is the (rather inane) way we hear the principle expressed these days.

What the Supremacy Clause actually says is: “This Constitution, and the Laws of the United States which shall be made in pursuance thereof…shall be the supreme law of the land.”

Such critics are expecting us to believe that the states would have ratified a Constitution with a Supremacy Clause that said, in effect, “This Constitution, and the Laws of the United States which shall be made in pursuance thereof, plus any old laws we may choose to pass, whether constitutional or not, shall be the supreme law of the land.”

Hamilton himself explained at New York’s ratifying convention that while on the one hand “acts of the United States … will be absolutely obligatory as to all the proper objects and powers of the general government,” at the same time “the laws of Congress are restricted to a certain sphere, and when they depart from this sphere, they are no longer supreme or binding.” In Federalist 33, Hamilton noted that the clause “expressly confines this supremacy to laws made pursuant to the Constitution.”

At North Carolina’s ratifying convention, James Iredell told the delegates that when “Congress passes a law consistent with the Constitution, it is to be binding on the people. If Congress, under pretense of executing one power, should, in fact, usurp another, they will violate the Constitution.” In December 1787 Roger Sherman observed that an “excellency of the constitution” was that “when the government of the united States acts within its proper bounds it will be the interest of the legislatures of the particular States to Support it, but when it leaps over those bounds and interferes with the rights of the State governments they will be powerful enough to check it.”

Another argument against the constitutionality of nullification is that the Constitution nowhere mentions it.

This is an odd complaint, coming as it usually does from those who in any other circumstance do not seem especially concerned to find express constitutional sanction for particular government policies.

The mere fact that a state’s reserved right to obstruct the enforcement of an unconstitutional law is not expressly stated in the Constitution does not mean the right does not exist.  The Constitution is supposed to establish a federal government of enumerated powers, with the remainder reserved to the states or the people.  Essentially nothing the states do is authorized in the federal Constitution, since enumerating the states’ powers is not the purpose and is alien to the structure of that document.

James Madison urged that the true meaning of the Constitution was to be found in the state ratifying conventions, for it was there that the people, assembled in convention, were instructed with regard to what the new document meant.  Jefferson spoke likewise: should you wish to know the meaning of the Constitution, consult the words of its friends.

Federalist supporters of the Constitution at the Virginia ratifying convention of 1788 assured Virginians that they would be “exonerated” should the federal government attempt to impose “any supplementary condition” upon them – in other words, if it tried to exercise a power over and above the ones the states had delegated to it. Virginians were given this interpretation of the Constitution by members of the five-man commission that was to draft Virginia’s ratification instrument.  Patrick Henry, John Taylor, and later Jefferson himself elaborated on these safeguards that Virginians had been assured of at their ratifying convention.

Nullification derives from the (surely correct) “compact theory” of the Union, to which no full-fledged alternative appears to have been offered until as late as the 1830s. That compact theory, in turn, derives from and implies the following:

1) The states preceded the Union.  The Declaration of Independence speaks of “free and independent states” (and by “states” it means places like Spain and France) that “have full power to levy war, conclude peace, contract alliances, establish commerce, and to do all other acts and things which independent states may of right do.” The British acknowledged the independence not of a single blob, but of a group of states, which they proceeded to list one by one.

The states performed activities that we associate with sovereignty. Massachusetts, Connecticut, and South Carolina outfitted ships to cruise against the British. It was the troops of Connecticut that took Ticonderoga. In New Hampshire, the executive was authorized to issue letters of marque and reprisal. In 1776 it was declared that the crime of treason would be thought of as being perpetrated not against the states united into an indivisible blob, but against the states individually.

Article II of the Articles of Confederation says the states “retain their sovereignty, freedom, and independence”; they must have enjoyed that sovereignty in the past in order for them to “retain” it in 1781 when the Articles were officially adopted.  The ratification of the Constitution was accomplished not by a single, national vote, but by the individual ratifications of the various states, each assembled in convention.

3) Since the peoples of the states are the sovereigns, then when the federal government exercises a power of dubious constitutionality on a matter of great importance, it is they themselves who are the proper disputants, as they review whether their agent was intended to hold such a power.  No other arrangement makes sense.  No one asks his agent whether the agent has or should have such-and-such power.  In other words, the very nature of sovereignty, and of the American system itself, is such that the sovereigns must retain the power to restrain the agent they themselves created.  James Madison explains this clearly in the famous Virginia Report of 1800:

The resolution [of 1798] of the General Assembly [of Virginia] relates to those great and extraordinary cases, in which all the forms of the Constitution may prove ineffectual against infractions dangerous to the essential right of the parties to it. The resolution supposes that dangerous powers not delegated, may not only be usurped and executed by the other departments, but that the Judicial Department also may exercise or sanction dangerous powers beyond the grant of the Constitution; and consequently that the ultimate right of the parties to the Constitution, to judge whether the compact has been dangerously violated, must extend to violations by one delegated authority, as well as by another, by the judiciary, as well as by the executive, or the legislature.

In other words, the courts have their role, but in “great and extraordinary cases” it would be absurd for the states, the fundamental building blocks of the United States, not to be able to defend themselves against the exercise of usurped power. The logic of sovereignty and the American Union demand it.