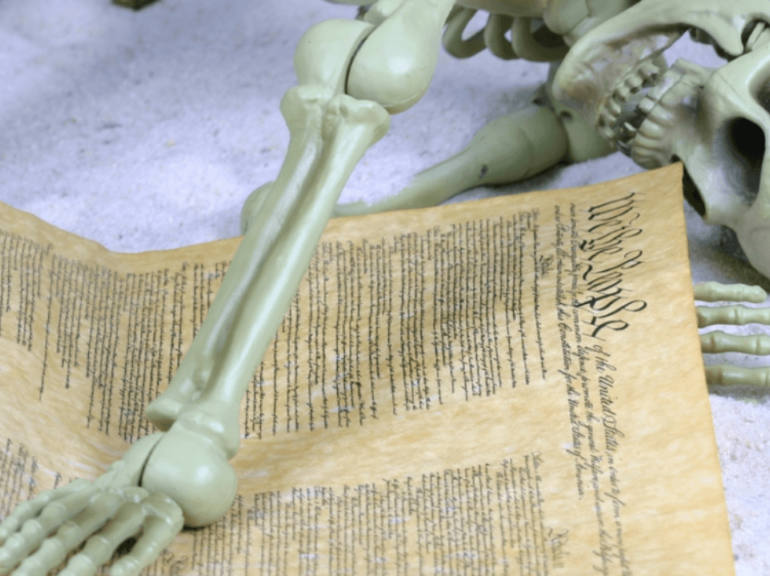 Two weeks ago, while the House of Representatives was finalizing its 700-page legislation authorizing the Treasury to borrow and spend $1.9 trillion in the next six months, and the Senate was attempting to confirm more of President Joseph R. Biden’s cabinet nominees, Biden secretly ordered the Pentagon to bomb militias in Syria.

The United States is not at war with Syria. It is not at war with the militias that were bombed, and it didn’t seek or have the permission of the Syrian government to enter its air space and engage in deadly military activities. Biden later claimed that the bombing was conducted as “a lesson to Iran,” another country with which the U.S. is not war.

His campaign promises to the contrary notwithstanding, Biden has followed in the footsteps of his immediate predecessors. They bombed civilians in an aspirin factory in Kosovo (Clinton), bombed civilians in Iraq (G.W. Bush), bombed military targets and government buildings in Libya and bombed a cafe in the Yemen desert targeting an American who was having tea (Obama), bombed the same location as Biden in Syria, and bombed a convoy of trucks in Iraq targeting an Iranian general who was on his way to lunch with an Iraqi counterpart (Trump).

All of these bombings and targeted killings violated the U.S. Constitution, the U.N. Charter — which is a treaty largely written by the U.S., and to which the U.S. is a signatory — and international law.

What is going on with American presidents and war?

The Constitution specifically separates the power to make war from the power to wage war. The delegates to the Constitutional Convention in 1787 spent more time debating this than any other topic — beside the makeup of Congress. In the end, they were adamant and unanimous that only Congress can declare war and only the president can wage war.

James Madison — the scrivener at the Convention — famously offered that if a president could declare war and wage war, or even use the military to target any foreign entity he wished, then he would be a king, not a president. He argued that war exacerbates the president’s “strongest passions and most dangerous weaknesses.” And when he drafted the Bill of Rights, Madison had the presidency in mind when he wrote in the Fifth Amendment that the government may not take life, liberty or property without due process of law.

Taken together, the exclusive constitutional delegation of war-making to Congress and the Due Process Clause absolutely restrain the legal ability of the president to use violence in another country without a declaration of war from Congress; and in the case of violence against an American, without a conviction by a jury and all the constitutional protections attendant upon that. And, against civilians — never.

When President George W. Bush decided to invade Afghanistan in retaliation for what he argued was providing haven and resources for those who planned, paid for and carried out the attacks on 9/11, he first went to Congress. Congress did not declare war on Afghanistan. Instead, it enacted a resolution called the Authorization to Use Military Force of 2001. That authorized Bush and his successors to use the military to target the perpetrators of 9/11 wherever and whenever they found them.

Unlike traditional declarations of war, the AUMF of 2001 did not have an endpoint, and that is its fatal flaw. Presidents Barack Obama, Donald Trump and Biden disingenuously cited it as their legal authority to bomb Middle Eastern targets that had no conceivable relationship to the perpetrators of 9/11.

When Bush sought to invade Iraq to locate and destroy what he claimed were weapons of mass destruction, Congress enacted another AUMF in 2002. It, too, has no endpoint.

Last week, a bipartisan group of senators offered legislation to repeal both AUMFs and Biden has indicated that he will sign the repeal. That is a good start toward taming the executive appetite for military violence, but it is not enough.

Congress must do more than just repeal the two AUMFs if it believes that the Constitution means what it says. Congress needs to repeal the War Powers Resolution of 1973 — which purports to permit presidents, upon notification to Congress, to wage 90-day offensive wars, in violation of the Constitution and international law.

Congress needs to prohibit absolutely the unauthorized presidential expenditure of money and deployment of armed personnel on any nondefensive violent actions. I say “personnel” rather than “military” because modern presidents have often used the CIA to fight wars and argued that because those wars did not involve the military, no congressional approval or notification was needed.

Congress should criminalize such presidential violence and the expenditures of resources to support it, as it is a crime to kill without lawful authority. And Congress should call non-defensive killings — by the government or anyone — by their legal name: Murder.