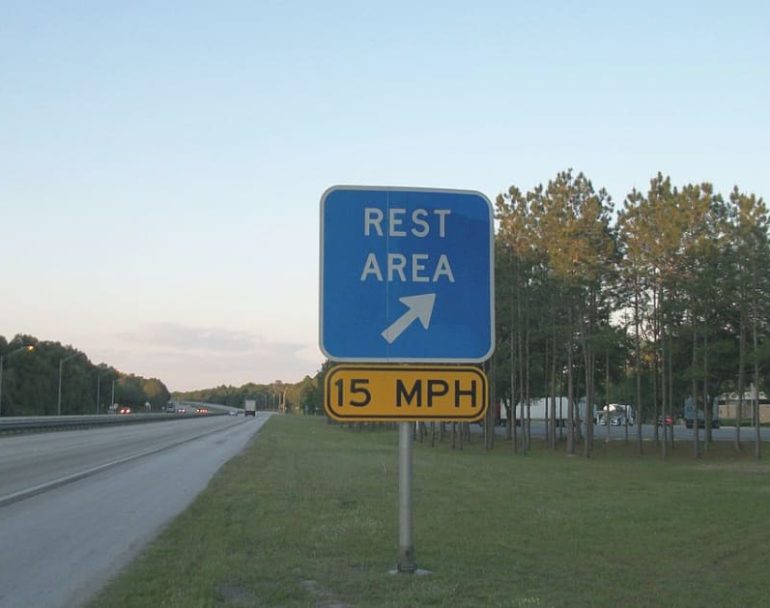 DOT’s and police are now spying on rest areas in real-time 24/7.
According to an article in the Star Tribune, transportation departments in eight states have installed cameras and sensors in rest areas.

“New technology rolled out in Minnesota and seven other Midwestern states aims to help Wortham and other truckers find parking by broadcasting in real-time the number of spaces available at rest areas.”

Rest area surveillance does much more than let truckers know about parking availability.

“In Minnesota, six rest areas have the new technology, including cameras taking regular pictures of the parking lots and sensors the size of hockey pucks embedded in the concrete of each parking spot. Those sensors beam data to dynamic roadside signs that display the number of parking spaces available.”

Rest area surveillance is being billed as “the nation’s first multi-state truck parking information system.” But as you will see, it is fairly easy for law enforcement to use rest area parking cameras and sensors to spy on everyone.

According to the article; Minnesota, Indiana, Iowa, Kansas, Kentucky, Michigan, Ohio and Wisconsin are currently spying on rest areas. An article in the Orlando Sentinel reveals that Florida is also spying on rest areas, bringing the total to nine states.

“Underground sensors shaped like hockey pucks were planted at each of the truck spaces, along with detection devices at the entrances and exits of the rest stops and weigh stations to monitor the number of available parking spaces.” (To find out more about magnetic rest area sensors click here.)

The report called “A Comprehensive System For Assessing Truck Parking Availability” reveals that DOTs are also using truck GPS’s and Geo-Fences that are spaced every five miles to identify vehicles approaching rest areas.

Looking at the subject “Detection Performance Measuring Methodology” (page 40) reveals that rest area sensors and cameras are being used to detect every type of vehicle.

“A manual ground-truth process was developed to interactively label the parking status of several observed spaces which were processed by the vision module detection algorithm. General attributes pertaining to weather conditions, double-parking, private vehicles vs. trucks (SUTs, buses, and large RVs were also classified as trucks).”

Just think about what this means, now cops will know in real-time when you and your family use the bathroom!

SmartPark and Smart Drive both have one thing in common, surveillance.

Last year, I reported how SmartDrive claimed that truck drivers who do not want to turn their vehicles into rolling surveillance platforms “have something to hide”.  Using surveillance cameras, Geo-Fences and sensors to monitor vehicles in rest areas is the epitome of a police state.

Law enforcement with help from the Feds have effectively created the nation’s first bathroom surveillance program.

Airports in at least three states are using the DOT’s SmartPark Technology to spy on air travelers.

SmartPark is being used in the La Guardia and JFK International airport in New York, the Philadelphia International Airport and at the Bill and Hillary Clinton Airport in Arkansas.

If you include SmartPark airport parking surveillance the number of states spying on motorists jumps to twelve!

How long before DOT’s claims they need to use license plate readers and facial recognition cameras at rest areas?