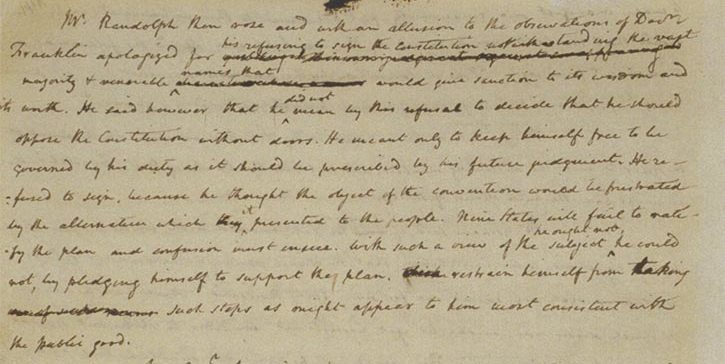 Since the 2015 publication of Madison’s Hand, a book that above all seeks to discredit Madison’s Notes as a reliable record of the Constitution’s formation, anti-originalist historians have been actively recommending it. All of them have stressed the light this book will shed on contemporary debates over the Constitution.

Jack Rakove and Jonathan Gienapp have written similar and glowing reviews of the book. Both praise its author, Mary Sarah Bilder, not only for her painstaking research but also for her humility or restraint in interpreting the physical evidence. Both promise that Madison’s Hand will not only alter our understanding of Madison’s Notes and the Constitutional Convention, but our contemporary understanding of the Constitution itself. And both conclude with sweeping and grandiose claims that, after this book, either our view of Madison’s Notes or constitutional scholarship in general will never be the same again. Rakove alone uses his review as a forum to take direct aim at originalists, describing the “perverse effect” that this book will have on the dominant form that is practiced today.

Similarly, Saul Cornell has been one of the leading voices explaining and defending the “anti-originalism” of most historians. His criticism of the originalists’ “Use and Abuse of History” in the D.C. v. Heller case makes a cogent case that originalists are sometimes guilty of “law office history.” Nevertheless, he is guilty of some of the same “use and abuse of history” when recommending the “must-read” book, Madison’s Hand. Cornell asserts that Madison’s doctoring of his Notes for his own benefit is now an “indisputable fact,” and he promises that the “meticulous and measured” scholarship in this book will change “the way we view history and the law.”

The problem with these several endorsements comes down to this: a careful examination of the book’s claims will show that none of the author’s new “discoveries” about Madison’s alleged misdeeds is based on verifiable historical evidence. All of it relies on a large dose of imaginative conjecture, and much of it is based on factual error and strategic omissions. But the anti-originalist historians seem poised to gloss over the historiographical defects in the book, evidently because they are enthralled by the conclusions it reaches.

For instance, both Rakove and Gienapp affirm that it is likely that Madison wrote out his Notes only twice per week during the Convention. This likelihood is insisted upon, in spite of Madison’s explicit statement that he wrote out his Notes as soon as possible after each day’s sessions, and in spite of a total absence of supporting evidence for the new alternative theory.  Again, both Rakove and Gienapp are entirely sold on the novel story that Madison’s important June 6 speech was written and inserted into the Notes years later (supposedly, it was never actually spoken during the Convention). This ready credence is difficult to understand, since the bulk of the “evidence” which Madison Hand advances to support this theory rests on false or misleading descriptions of the manuscripts and an overly credulous trust in Rufus King’s fragmentary records for the first week of June. A closer and more accurate examination of the facts leads the researcher to the conclusion that Madison’s Notes for June 6 were written contemporaneously, and they were an accurate portrayal of the day’s events. Rufus King’s notes, on the other hand, were in a confused state and probably mistaken.

Anti-originalist historians have made some good points when they question whether originalists can retain credibility as expositors of the historical meaning(s) of the Constitution insofar as they spurn constitutional history. Nevertheless, their warm and ready embrace of Madison’s Hand calls into question the self-endorsement of historians, taken as a class, as being uniquely qualified for understanding constitutional history.

Gienapp has recently written that legal scholars are ill equipped to judge the original meanings of the Constitution, because they lack the specialized training and outlook of the historian.  Understanding the original meaning of a text requires “something far greater than mastery of facts;” indeed, it “requires taking up residence with the natives of the historical past.”

In response, Georgetown law professor Randy Barnett accused Gienapp of turning historians into a sort of priestly class, uniquely qualified to understand original constitutional meanings.  Gienapp followed up on his initial critique by clarifying, albeit vaguely, that the historical knowhow lacking amongst originalists is an appreciation of the vast foreignness of the past.

Gienapp did not delineate many particulars detailing how that appreciation for the foreign past is acquired. Nonetheless, Barnett’s criticism that the historians’ knowledge comes down to a sort of priestly Gnosticism would seem to be verified by the praise and ready acceptance Gienapp has elsewhere lavished on the questionable methodology and conclusions found in Madison’s Hand.

According to Madison’s Hand, and contrary to the leading histories prior to it, numerous historical records are less reliable than we have previously supposed them to be.  Ostensibly, Madison’s Notes were initially intended to be a private diary, not an objective account of the debates; Madison deliberately left out material whenever he was uncomfortable with it or when he was simply bored; many of the speeches were not composed until years after the Convention; some of Madison’s pre-Convention arguments were not actually developed until after the Convention; Hamilton’s notes of Madison’s June 6 speech was actually written in response to Federalist 10; Dolley Madison may have actually composed an important part of Madison’s Preface to his Notes without his permission; and, most important of all, Madison frequently altered the account of the Constitution’s formation, years later, to make himself look better. In other words, nothing is ever what it appears to be (although there is no real evidence to support these suppositions).

Whereas Gienapp has insisted that “going native” in the past must mean something “greater than mastery of facts,” the book he praises is altogether unmoored from a scrupulous adherence to facts. The new stories that Madison merely fabricated parts of his Notes are themselves no better than fabrications. Therefore, the anti-originalist historians’ endorsement of these imaginative stories as “indisputable facts” must in the final analysis come down to this: “trust us, we’re historians.”

Why would anti-originalist historians wish to discredit historical records? In this rush to debunk Madison’s Notes, their impetus seems to be the same as that which is animating the anti-historical originalists. It is a battle to determine which sort of expertise is best qualified to discern the meanings of the original constitution. Whoever can be trusted to best discern constitutional meanings in the past will have the greatest influence over constitutional interpretation as it is practiced today.

Consider: if it were true that the most authoritative records of the Constitution’s formation are seriously compromised, then a simple, uncomplicated reading of them will not yield genuine historical meaning. And once that premise is accepted as true, then only highly trained historians — those who are uniquely qualified to see the truth behind the false façade of seemingly straightforward historical texts — are able to piece together the meaning of that text.

In April of 2017, Mary Sarah Bilder wrote an article for the Boston Globe about Neil Gorsuch’s nomination to the Supreme Court, titled, “The Constitution Doesn’t Mean What You Think It Means.” Some originalists took exception to a couple of slighting remarks she made about them. Lawrence Solum complained about her misrepresentation of originalists, and he felt particularly aggrieved because he believed that originalists have treated her work with so much respect and care. And in a post for this blog, John O. McGinnis shrugged off Bilder’s historical account of the framing of the Constitution, because it did not (contrary to her apparent intent) undermine originalism.

Both Solum and McGinnis have entirely missed the big picture. Bilder’s most damaging claims, as far as originalists are concerned, are her repeated assaults on the reliability of historical documents (a subject to which the Globe article only barely alluded). If true, these claims would considerably alter the study of history and make it inaccessible to any but historians.

Jack Rakove concluded his review of Madison’s Hand by saying that its author has made the task of the “working historian … all the more challenging.” He strongly implies that all others who are not working historians — whether they be legal scholars, political theorists, or the unwashed masses — are likely duped whenever they simply try to read historical texts at face value.

How is one to square the historians’ defense of their superior methodologies, on the one hand, with the enthusiastic promotion of a book that employs a rather questionable methodology to reach dubious conclusions, on the other? The only explanation would seem to be the expectation — shared by Rakove, Gienapp, Cornell, and Bilder — that the audacious new conclusions found within Madison’s Hand will alter constitutional interpretation as it is practiced today.

Eventually, when a more thorough, accurate, and impartial history of Madison’s Notes is finally published, it will be found that originalist legal scholars are not the only ones who may sometimes be guilty of law-office history. Some historians also cherry-pick the evidence for their own purposes. The integrity of any discipline depends on a commitment to following the facts wherever they lead: allowing the facts to shape one’s conclusions rather than the other way around.

For too long, many of those who have examined Madison’s Notes have been influenced by an implicit agenda of one kind or another. Today, representatives from both sides in the originalism debate — the anti-historical originalists and anti-originalist historians — have been complicit in distorting the historical facts about Madison’s Notes, and thereby corrupting the discipline of history. Those who still care about historical facts—who believe that the true calling of the historian is to reveal historical truths—should join with Shakespeare’s Mercutio in saying: A pox on both your houses.