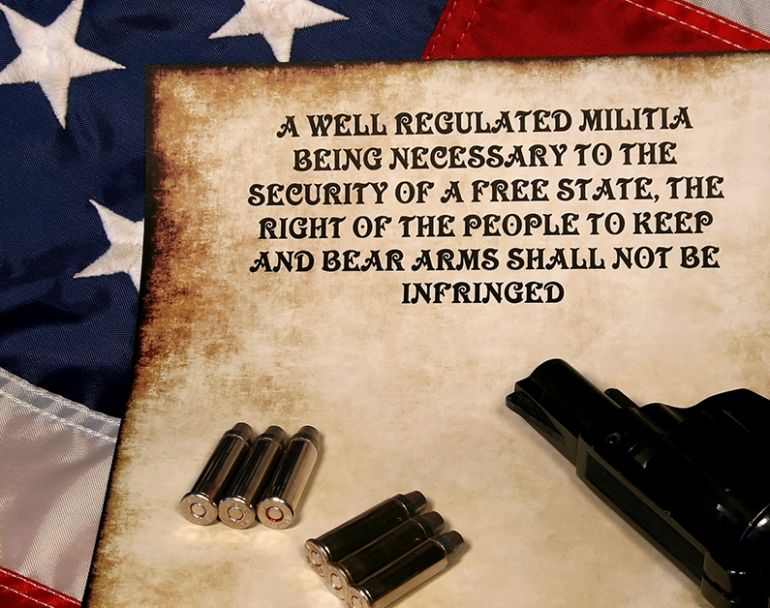 While apparently waiting for a taxi, or to be seated for lunch, Larry King was accosted by TMZ in a discussion which eventually led to King declaring that the whole purpose of the Second Amendment of the Bill of Rights was to “repel slave uprisings.”

“What’d they mean by militia?” King asks and then answers by claiming that “Southern senators” hatched the idea as a means of keeping slaves down.

Normally, the utterings of an 84-year old TV presenter wouldn’t necessitate a column. But it turns out that it’s really quite difficult to find reliable online information on militias in the period King is talking about. And, experience suggests, that the more obscure the historical topic one is discussing, the more outlandish claims one can make. Larry King could pretty much say anything about 18th-century militias, and we’d probably not hear much to contradict it. Rush Limbaugh’s “comeback” to King illustrates this plainly since all that Limbaugh could muster as a retort was to point out that pro-slavery people in the 19th century were often Democrats.

Needless to say, this weak-sauce non-rebuttal by Limbaugh doesn’t answer the question of how and why American militias came into being, or what it all has to do with private gun ownership. But, if we do look into some of the more obscure sources, we do find that the origins of American militias stem from a distrust of standing armies controlled by the central government. This distrust dates back at least to 17th-century England and pre-dates the US Bill of Rights by more than a century. Moreover, militias in the United States were widespread in non-slave states and hardly a phenomenon of Southern slavemasters.

The Creation of Militias and the English Civil War

In 17th-century England, the country was experiencing a growing resistance to a standing army that the English king could use to impose new laws and crush dissent.

By the 1640s, reformers such as the libertarian “Levellers” were calling for a decentralized militia system which would lessen the power of the king in domestic affairs. In The Levellers: Radical Political Thought in the English Revolution, Rachel Foxley writes: (1)

In the Third Agreement of the People, in May 1649, the Levellers proposed that armed forces were to be raised strictly by local divisions, and officered by men elected locally; only the general officers were to be appointed by Parliament. [John] Wildman was to express similar views in more specifically republican terms in the 1650s, opposing ‘mercenary’ armies in favour of the people being ‘masters of their own Arms’ …

Not surprisingly, militias were not exactly in favor during the dictatorship of Oliver Cromwell, who centralized power considerably. But support for militias again returned with the monarchy. British historian Marcus Cunliffe explains in his history of American military institutions:

At the restoration of the Stuarts in 1660, both Charles II and Parliament would for different reasons have liked to be rid of the Cromwellian legacy of the New Model Army. But some troops were needed to keep order. A compromise was reached. First, a small regular force was to be maintained: this was the actual foundation of the British standing army. Second, there was to be a nationwide militia, composed of civilians who would — as in earlier days — be summoned in time of need. The militia, however, was to be under civil law, and to be organized locally by the lord lieutenant of each county. It was thus decentralized and divorced from royal control.

Cunliffe further explains that later American attitudes toward a standing army were adopted nearly wholesale from earlier English attitudes about militias and civil control of the military. These attitudes can be found in the Declaration of Independence itself which lists among its grievances the fact that the king “has kept among us, in times of peace, Standing Armies without the Consent of our legislatures… [and] has affected to render the Military independent of and superior to the Civil Power.”

Thus it is in English history that we find the origins of the Second Amendment, which not only calls specifically for militias, but that the people be, in the words of John Wildman, “masters of their own arms.”

The idea that “Southern senators” came up with the idea years after the American Revolution ended doesn’t exactly stand up to any serious historical analysis.

Moreover, in the early United States, militias most certainly were not peculiar to Southern states. It was the Massachusetts militia, after all, that put down the “rebellion” of Daniel Shays and his compatriots in the 1780s.(2)

Moreover, as Jeffrey Rogers Hummel recounts, “three hundred” volunteer militias “sprang up in California between 1849 and 1856,” and it’s not at all difficult to find numerous Northern militias with names like the “New England Guards of Boston,” the “7th Regiment of New York ‘National Guards,’” and the “First Troop of the Philadelphia City Cavalry.” By the mid 19th century, slavery had all but disappeared in these states, and it was hardly necessary to maintain a militia for the purposes of countering slave rebellions. Pennsylvania, for example, began to phase out slavery in 1780. By 1810, there were fewer than 1,000 slaves left in Pennsylvania. By 1840, there were fewer than 100. The Pennsylvania militia continued to exist, of course — militias continued in all states for the similar reason that the “National Guard” exists today.

While slavery cannot be shown to be the motivation behind the militia guarantee in the Second Amendment, we do find that conscription (i.e., “the draft”) was perpetuated by efforts to force whites into service as part of slave patrols.

Hummel explains how, contrary to popular myth, the United States did indeed have conscription prior to the Civil War. It’s just that compulsory military service was done at the state level through militia laws.

By the 19th century, though, compulsory service began to fall out of favor, and compulsory militias were replaced by volunteer militias in much of the country. The South, however, did not participate in this trend:

Massachusetts eliminated all compulsory militia service in 1840, followed by Maine, Ohio, and Vermont in 1844, Connecticut and New York in 1846, Missouri in 1847, and New Hampshire in 1851. New Jersey eliminated imprisonment for failure to pay a militia fine in 1844, followed by Iowa in 1846, Michigan in 1850, and California in 1856. In several states, fines were no longer enforced, or became truly nominal. Mandatory training days were already less frequent, and had degenerated into more social than military events. Only in the South were the compulsory features of the militia maintained, probably because of their vital connection with slave patrols. [emphasis added]

This “common militia” based on conscription, in contrast to the more skilled and better equipped semi-private volunteer militias, thus continued longer in the South, and it should not be a surprise that the Confederacy implemented nationwide conscription before the North did.

If we want to blame slavery as the impetus for certain types of military service in the United States, it’s conscription and not the existence of the Second Amendment to which we had best direct our ire. After all, had it not been for the Southern practice of temporarily-enslaving whites to patrol for permanently-enslaved blacks, conscription might have been far more taboo than it already was by the mid-19th century. That, of course, would have been all to the good.

However, as leftists search around trying to connect the Second Amendment to anything unsavory they can, they have decided to try and connect its origins to slavery. In reality, however, the true legacy of the Second Amendment is more likely found in the Northern volunteer militias. Not only were these militias free of conscription, but they were also largely augmented by private gun ownership and private funding. Moreover, the “militia” was in many states also considered to be all male citizens as, for example, stated in the 1876 Colorado Constitution “the militia of the State shall consist of all able-bodied male residents of the State, between the ages of eighteen and forty-five years.” This further blurred the lines between the issue of raising state militias and private gun ownership. (3)

It’s no doubt true that many media celebrities have convinced themselves that the Second Amendment must be based on some sort of racist conspiracy. But this theory is mostly based on wishful thinking.