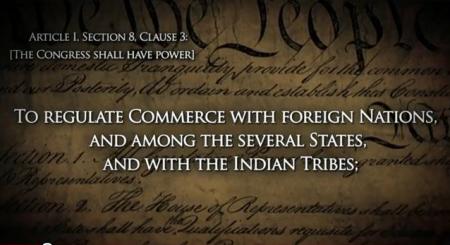 The parts of our federal Constitution are so interrelated that it is impossible to understand a single clause therein without considering all of the other provisions of our Constitution.

“The Congress shall have Power … To regulate Commerce with foreign Nations, and among the several States, and with the Indian Tribes;”

The original intent of the power to regulate commerce “among the several States” is proved here:  Does the “interstate commerce” clause authorize Congress to force us to buy health insurance?  That paper proves that the primary purpose of the power is to prohibit the States from imposing tolls and tariffs on articles of import and export – goods & commodities – merchandize – as they are transported through the States for purposes of buying and selling.

But recently, some have asserted that since “foreign Nations”, “the several States”, and “the Indian Tribes” are grouped together in the same clause, it necessarily follows that Congress’ power to “regulate commerce” with each of them is identical.  And since Congress has broad powers over foreign commerce, they conclude that Congress has those same broad powers over interstate commerce, and may lawfully, for example, ban the movement of physical goods [such as firearms] across state lines.

So let’s look at that clause in the Light cast by the rest of the Constitution.

Three entities are listed in the same clause at Art. I, §8, cl. 3; but we may not properly conclude that the extent and nature of the regulation permitted over the three entities is the same.  That’s because each entity has a distinctly different status, and is treated accordingly in the Constitution.

The States are the sovereign entities which created the federal government when they ratified the Constitution. At Art. I, §10, the States agreed that they would not individually exercise the power to make commercial and trade treaties with foreign Nations;  but would exercise that power collectively by delegating to the “creature” of the Constitution – the national government – the power to make such Treaties (Art. II, §2, cl. 2).

Various provisions are relevant to the power the States delegated to Congress respecting commerce with foreign Nations:

Congress has no such powers over the Member States.[2]

In Federalist No. 24 (10th & 11th paras), Hamilton speaks of the necessity of keeping small garrisons on our Western frontier which are necessary to protect “against the ravages and depredations of the Indians”; and that some of these posts (garrisons) “will be keys to the trade with the Indian nations.”

In Federalist No. 42 (11th para), Madison speaks of the unsettled status of Indians and says this has been a question of frequent perplexity and contention in the federal councils.

In Madison’s letter of February 13, 1829 to J.C. Cabell, he warns that the claim that the power to regulate commerce with the three entities is identical, is superficially plausible, but actually wrong.

He then says, as to the power to “regulate Commerce among the States”:

“… it is very certain that it grew out of the abuse* of the power by the importing States, in taxing the non-importing; and was intended as a negative & preventive provision agst. injustice among the States themselves; rather than as a power to be used for the positive purposes of the General Govt. in which alone however the remedial power could be lodged. And it will be safer to leave the power with this key to it, than to extend to it all the qualities & incidental means belonging to the power over foreign commerce…” [italics added]

So Madison warns that we better stick with the original understanding; and not interpret the clause to mean that the federal government has the same broad power over interstate commerce that it has over commerce with the foreign Nations and with the Indian Tribes.

[1]- The fed gov’t can’t lawfully ban imports of guns and arms because (1) gun control is not an enumerated power delegated to the fed gov’t over the Country at Large, and (2) the 2nd Amendment prohibits the fed gov’t from infringing our right to keep and bear arms.  A disarmed citizenry is inconsistent with Congress’ obligation, imposed by Art. I, §8, cls 15 & 16, to provide for the arming and training of the Militia of the several States.  To see what it was like when we elected to Congress people who knew and obeyed our Constitution, read the Militia Act of 1792.  But until We The People learn our Constitution, we will continue to elect ignoramuses to Congress.  We cannot be ignorant and free – and you can’t see that a candidate is ignorant unless you are knowledgeable.

[2]- Domestically, Congress has the power to impose excise taxes on specific articles in commerce. For a discussion of “imposts”, “excises” and the Whiskey Rebellion, see The Plot to Impose a National Sales Tax or Value Added Tax.