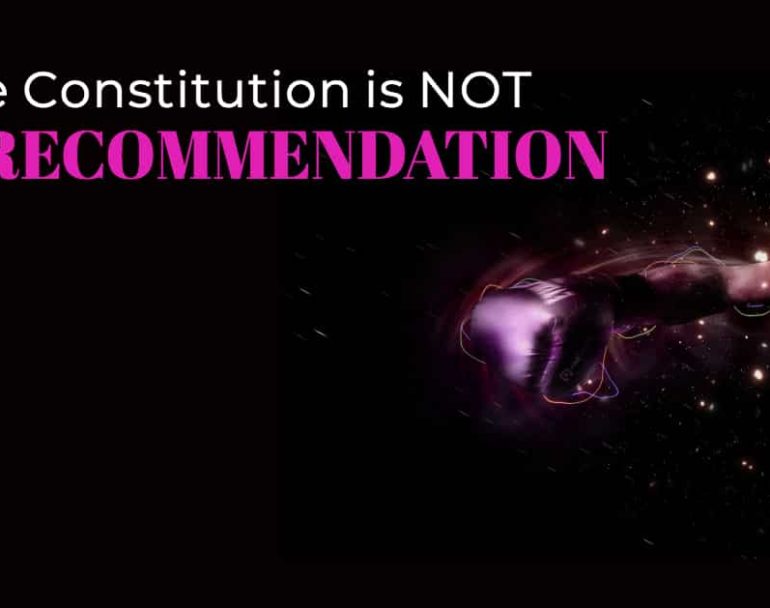 The Constitution is really just a series of suggestions. At least that’s how most American treat it.
The concept of a “Living Breathing Constitution” is the biggest enduring myth in America’s political narrative.

It used to be primarily a left-wing dogma. But in the era of Trump, an awful lot of people on the right have embraced the myth as well.

A few weeks ago, I posted an article by KrisAnne Hall about the illegitimacy of presidential “emergency powers.” But I was told the constitutional argument wasn’t really important.

After all, we’re faced with a “crisis” at the border and it’s imperative that the president deals with it. Surely there is wiggle-room in the Constitution for the president to act. We can’t be dogmatic at times like this. The Constitution was meant to flex with the times!

The powers delegated to the federal government, and distributed among its three branches, were set in stone. As I have explained before, a “living, breathing” Constitution is dead.

“But Mike,” people say, “You can’t expect the government to be limited by a document written more than 200 years ago. It has to be able to flex and change with the times.”

Yes. I agree. And in their wisdom, the founders included a process to change the Constitution as needed. It’s called the amendment process. You will find it in Article V.

“But Mike,” people say. (People “but Mike” me a lot.) “It’s hard to amend the Constitution and it takes too long. We need to be able to react quickly in an emergency. We can’t be waiting around for amendments.”

Actually, that was the point. We don’t want to give government new powers every time there’s some perceived crisis. Once the government has a given power, it will never give it up. Not ever. The power you allow government to exercise today will remain with you forever. So, you darn well better slow your roll and count the cost.

Expanding government power should only be done with deliberation and by those with cool heads. It’s not something that should be done in the middle of a crisis. If you want a perfect example of what happens when government is allowed to grow in the midst of a crisis, just look at all of the garbage we got in the wake of 9/11.

The Patriot Act, the TSA, the Department of Homeland Security and a bunch of undeclared wars. That stuff is never going away. And sadly, in retrospect, those things did virtually nothing to “make us safer.”

As James Madison wrote, “I entirely concur in the propriety of resorting to the sense in which the Constitution was accepted and ratified by the nation. In that sense alone it is the legitimate Constitution. And if that be not the guide in expounding it, there can be no security for a consistent and stable, more than for a faithful exercise of its powers.”

We cannot have a consistent and stable government when the dominant party can arbitrarily expand government power to address whatever “necessity” that it perceives. But sadly, that seems to be the kind of system most Americans want.

They like the idea of a Constitution in theory, but in practice, they don’t want it to be anything more than a suggestion.