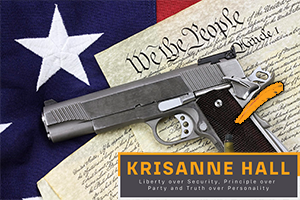 As you begin your legislative duties for this term and will undoubtably be called to debate so-called “gun legislation” please consider the following five points:

1.  The nature of this legislation.

This is NOT “gun legislation” this is 2nd Amendment legislation. Our right to bear arms is an INHERENT RIGHT, not a privilege granted through legislation or regulation. It is not something that is even eligible for federal legislative control. Would we so easily accept “religion legislation”?

2.  The sanctity of the 2nd Amendment.

What does the phrase “shall not be infringed mean?” The words are not complicated, they are not elusive. In the legal world, when a judge sees the words “shall not” there is no discussion to be had. It means, literally ‘SHALL NOT,’ completely disallowed, impermissible. It should mean the same to Congress. Noah Webster defined the word “infringed” as “to break; to violate; to transgress; to neglect to fulfill or obey.” The right to bears arms shall not be broken, shall not be violated, shall not be transgressed. The 2nd amendment shall be fulfilled, shall be obeyed. That is a very clear boundary, not mutable in any way. You don’t need to fully eradicate something for it to be violated or transgressed. Simply placing a hand on something can violate the sanctity of that object. Therefore, the only correct answer to the question, “what does ‘shall not be infringed’ mean?” is as follows: The right to bear arms SHALL NOT be touched!

3.  The purpose of the 2nd amendment.

WHY do we have the right to bear arms in the Bill of Rights? Contrary to popular belief, the 2nd Amendment is not for hunting, skeet shooting, gun-collecting nor even self-defense from robbers and muggers.

The framers of this nation made it extremely clear why this right is to be protected.

According to George Mason, we bear arms to keep from becoming ‘slaves’ to our government: “[W]hen the resolution of enslaving America was formed in Great Britain, the British Parliament was advise …to disarm the people; that it was the best and most effectual way to enslave them.”

According to Noah Webster, we bear arms to prevent the government from using a standing army to enforce unjust, unconstitutional, and oppressive laws on the people: “Before a standing army can rule, the people must be disarmed…The supreme power in America cannot enforce unjust laws by the sword; because the whole body of the people are armed…A force, at the command of Congress, can execute no laws, but such as the people perceive to be just and constitutional…jealousy will instantly inspire the inclination, to resist the execution of a law which appears to them unjust and oppressive”

According to Richard Henry Lee, we bear arms to preserve Liberty: “[W]hereas, to preserve liberty, it is essential that the whole body of the people always possess arms…”

According to Patrick Henry, we bear arms to overthrow tyrants: “O sir, we should have fine times, indeed, if, to punish tyrants, it were only sufficient to assemble the people! Your arms, wherewith you could defend yourselves, are gone…Did you ever read of any revolution in a nation…inflicted by those who had no power at all.”

It is notable that the framers declared a “right to bear arms” not a right to “own muskets”. The purpose of the Right to Keep & Bear Arms meant the same to the drafters of the 2nd Amendment as did to the Supreme Court in 1939. (See United States v. Miller, 307, 174 (U.S 1939) issuing the opinion recognizing that the second amendment protects the people’s right to bear the same arms as the military.)

Therefore, the only correct answer as to WHY our right to bear arms was included in the Bill of Rights is as follows: The whole body of the people has the right to bear arms to preserve liberty, prevent the government from enforcing unjust, unconstitutional, oppressive laws; to keep from becoming enslaved by our government and to overthrow tyrants.

4.  The process for altering the 2nd amendment.

5.  There is only on relevant question to any “gun control” debate:

“Do you trust those in power, now and forever in the future, to never attempt to take your life, liberty, or property through the force of government?”

If the answer to that question is “no,” the gun control debate is over.

Patrick Henry issued this warning, “Guard with jealous attention the public liberty. Suspect every one who approaches that jewel.”  And that is exactly what we are doing.  Therefore, be it known that if you continue down this unconstitutional path in your assault upon the Liberty of the American people and upon the foundations of this nation, you will be marked as a danger to the future of American of Liberty.

We the people, being the only legitimate source of power in all government, demand that you honor your oath to support and defend the Constitution.  Defend the future of America by opposing ALL federal gun regulations.

Sincerely and In Liberty,