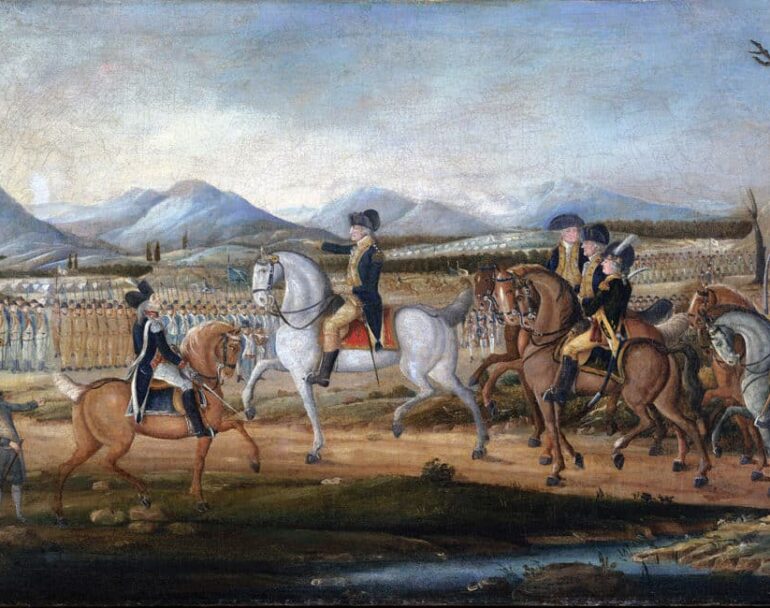 The recent protests and storming of the U.S. Capitol building on Jan. 6 produced a hysterical reaction from both pundits and the federal government. This contrasts wildly with the response to an actual rebellion during the Republic’s early days.

The new federal government didn’t respond to the so-called Whiskey Rebellion with crackdowns on civil liberties to “prevent another rebellion” as many seem to want to do today.

In 1794 Kentucky and Pennsylvania farmers took up arms in opposition to a federal whiskey excise tax. The Whiskey Rebellion concluded with President George Washington calling up the militia to suppress the rebels, who dispersed before any real fighting occurred.

Interpretations of the rebellion vary. Some view Washington’s decision as a vital move to preserve the then-fledgling federal government’s legitimacy after Shay’s Rebellion eight years prior had prompted the founders to replace the Articles of Confederation in favor of a stronger central government. However, others consider the rebels as patriots resisting an unjust tax on whiskey, which was frequently used as a means of exchange in frontier areas where coinage was scarce.

To be sure, Washington reacted initially in a manner utterly restrained compared to what we could expect today. Even after invoking the Militia Act of 1792 allowing him to call up state militiamen, he sent state officials to the rebels and tried to reach a peaceful resolution, without success.

However, a separate issue to look at is the aftermath of the rebellion. Roughly 150 men were arrested and tried for treason. Yet only two men were found guilty, and they were later pardoned by Washington himself.

In his seventh state of the union address Washington defended his decision:

For though I shall always think it a sacred duty to exercise with firmness and energy the constitutional powers with which I am vested, yet it appears to me no less consistent with the public good than it is with my personal feelings to mingle in the operations of Government every degree of moderation and tenderness which the national justice, dignity, and safety may permit.

As historian Carol Berkin noted in a 2017 lecture, “not a single person really ever served a jail term. Everybody was given amnesty. Nobody was cruelly beaten or destroyed. But the power, the authority of the federal government was upheld.”

Perhaps Washington and other Founders holding office realized the appearance of hypocrisy for condemning men as traitors who acted as they had just a few decades earlier.

At the same time, it’s not so much what Washington and Congress did as what they didn’t do or even propose to do. Reading through diaries, letters, and correspondence from founders ranging from George Washington and Alexander Hamilton to Thomas Jefferson written during the rebellion, there is no instance I could find in which they advocated or suggested the civil rights restrictions such as firearms ownership or freedom of speech and assembly. There was no call for a permanent standing army. This is on top of the fact that nothing was actually proposed and then enacted.

In fact, Jefferson wrote sympathetically of the rebellion in a Dec. 28, 1794 letter to John Adams, calling the whiskey tax “an infernal one. The first error was to admit it by the Constitution.”

He wrote further that hatred of the law in those states was “universal, and has now associated to it a detestation of the government; & that separation which perhaps was a very distant & problematical event, is now near, & certain, & determined in the mind of every man.”

Not surprisingly, Jefferson would later repeal the excise tax when elected president.

Even federalists like Alexander Hamilton in ways sought to avoid violence that might have demonstrated the power of the new government, albeit he did advocate hanging some of the rebel leaders. In an Aug. 29, 1794 letter to Maryland Governor Thomas Lee, he wrote of avoiding “the necessity of using force now & at future periods” by keeping the militia deployed in good morale.

In all the correspondence Hamilton had with George Washington, not one advocated for the confiscation of firearms from the regions where the rebellion had occurred. Nor was there a call to restrict firearm ownership of any type among the general population to prevent similar rebellions in the future. The federal government didn’t use the “crisis” as an excuse to enlarge itself, as some sought with the Alien and Sedition Act passed four years later

While Washington’s best opportunity to make himself a military dictator occurred just after the War of Independence ended with him still in charge of the continental army, the Whiskey Rebellion theoretically could have afforded him another chance – one that he likely never even contemplated.

The comparatively restrained response by Washington to the rebellion demonstrated that it is not necessary to take away liberties to maintain civil order or “keep us safe.”

Writing in reaction to Shay’s Rebellion, Thomas Jefferson wrote a letter to James Madison saying rebellions were a “medecine necessary for the sound health of government” and that “honest republican governors” should be “so mild in their punishment of rebellions, as not to discourage them too much.”

What many people fail to grasp is that rebellions and insurrections aren’t always found in physical confrontations, and the “medicine necessary for the sound health of government” can be applied just as effectively through the nullification of unconstitutional federal acts. Incidentally, Jefferson referred to nullification as the “rightful remedy.”

The histrionic and totalitarian rhetoric coming from the federal government today over a handful of people storming the U.S. Capitol demonstrates how fragile its perceived legitimacy is today. It is a government that overreacts to minor incidents because deep down its members are terrified of any meaningful defiance or resistance to their rule.

They realize how easily D.C. tyranny could end if the American people were united in common opposition to unconstitutional actions in a manner that reduced their power, rather than give the largest government in the world the further pretext to expand it.