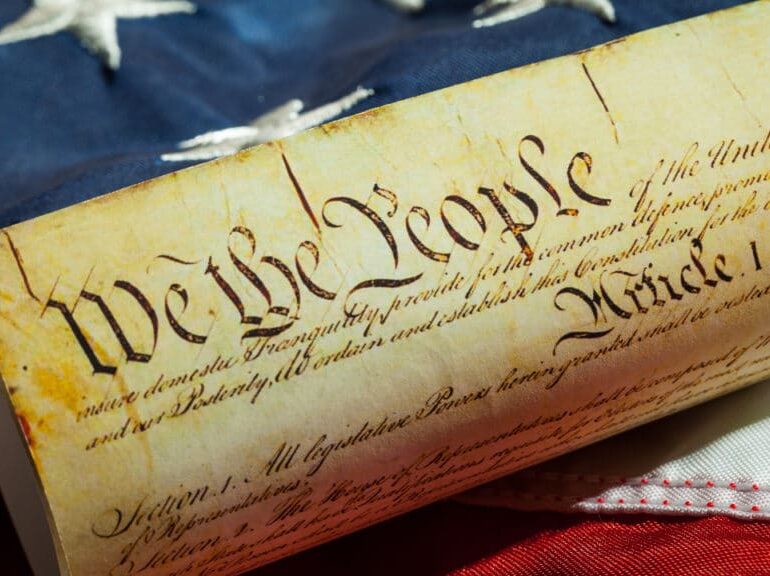 We hear it said that whenever the Senate ratifies a treaty, it becomes part of “the supreme Law of the Land”.  But is that True?  Not necessarily!  Walk with me, and I will show you how to think through this question, and how to analyze other constitutional questions which come your way.

1.  Does the federal government have authority to make treaties?  Can treaties be about any object? Or, are the proper objects of treaties limited by The Constitution?

“… shall have Power, by and with the Advice and Consent of the Senate, to make Treaties, provided two-thirds of the Senators present concur…”

Thus, we see that the federal government is authorized to make treaties.  Now, we must find out whether there are limitations on this treaty making power.

So we see right away that a Treaty is part of the supreme Law of the Land only if it is made “under the Authority of the United States“.

4.  In Federalist No. 44 (7th para from end), James Madison explains why it is necessary that Art. VI, cl. 2, provide that federal treaties have supremacy over State Constitutions.  Otherwise, a treaty which violates a State Constitution would have no effect in that State:

“…as the constitutions of the States differ much from each other, it might happen that a treaty or national law of great and equal importance to the States would interfere with some and not with other constitutions and would consequently be valid in some of the States at the same time that it would have no effect in others.” [emphasis added]

Madison thus illustrates the Principle that a treaty which interferes with the Constitution has no effect.  I found no other discussion in The Federalist Papers on this point.

So, let us turn to Thomas Jefferson, who wrote: 2

“In giving to the President and Senate a power to make treaties, the Constitution meant only to authorize them to carry into effect, by way of treaty, any powers they might constitutionally exercise. “–Thomas Jefferson: The Anas, 1793. ME 1:408 [emphasis added]

“Surely the President and Senate cannot do by treaty what the whole government is interdicted from doing in any way.” –Thomas Jefferson: Parliamentary Manual, 1800. ME 2:442 [emphasis added]

“According to the rule established by usage and common sense, of construing one part of the instrument by another, the objects on which the President and Senate may exclusively act by treaty are much reduced, but the field on which they may act with the sanction of the Legislature is large enough; and I see no harm in rendering their sanction necessary, and not much harm in annihilating the whole treaty-making power, except as to making peace.” –Thomas Jefferson to James Madison, 1796. ME 9:330 [emphasis added]

5. So!  The treaty making power of the United States is very limited. What, then, are the proper objects of treaties?  To find the answer, we must go to The Constitution to see what it authorizes the President and the Congress to do.  The Constitution delegates to Congress powers “To regulate Commerce with foreign Nations … and with the Indian Tribes” (Art I, § 8, cl. 3); and “To declare War…and make Rules concerning Captures on Land and Water” (Art I, § 8, cl. 11).  The Constitution authorizes the President to “…appoint Ambassadors, other public Ministers and Consuls…” (Art II, §2, cl. 2).

There may be additional objects of the treaty making power authorized in The Constitution.  For example, Art I, § 8, cl. 8, authorizes Congress “To promote the Progress of Science and useful Arts, by securing for limited Times to Authors and Inventors the exclusive Right to their respective Writings and Discoveries“.  Thus, The United States could properly enter into treaties respecting patents & copyrights. 3

6. Let’s look now at the proposed U.N. Convention on the Rights of the Child.  If ratified by the Senate, would it become part of “the supreme Law of the Land”?

The answer to both questions is “NO!”  In addition, the 10th Amendment says if a power is not delegated to the United States by the Constitution, or prohibited to the States by Art. I, §10, it is reserved to the States or the people.  Thus, jurisdiction over “children” is reserved to the States or the people!  Accordingly, if the Senate were to ratify the U.N. Convention on the Rights of the Child, the treaty would NOT become part of “the supreme Law of the Land”, because it would not have been made under the Authority of the United States.  It would be a mere usurpation and would deserve to be treated as such.

If the Senate were to ratify the cap-and-trade “climate” treaty, which, among other things, would force energy companies to buy allowances or permits for their “carbon emissions”, would it become part of “the supreme law of the Land”?  You are now equipped to find the answer, and you can confidently defend it!

7.  Finally, Thomas Jefferson points to a legislative remedy if the President and the Senate ignore the constitutional limits on the treaty making power of the United States. Thomas Jefferson says:

“…We conceive the constitutional doctrine to be, that tho’ the P. & Senate have the general power of making treaties yet whenever they include in a treaty matters confided by the constitution to the three [sic] branches of legislature, an act of legislation will be requisite to confirm these articles, and that the H. of Repr. as one branch of the legislature, are perfectly free to pass the act or to refuse it, governing themselves by their own judgment whether it is for the good of their constituents to let the treaty go into effect or not….” –Thomas Jefferson’s letter of March 21, 1796 to James Monroe [emphasis added] 4

“…I was glad … to hear it admitted on all hands, that laws of the U S, subsequent to a treaty, controul it’s operation, and that the legislature is the only power which can controul a treaty. Both points are sound beyond doubt.,,,” Thomas Jefferson’s letter of May 31, 1798 to James Madison. 5

What a man! And our system of checks & balances is an elegant one, indeed!

8.  Folks!  For too long, we have blindly accepted whatever we hear others say.  Someone on TV or the Internet says, “If the Senate ratifies this treaty, it will become part of the supreme Law of the Land!”  And not only do we believe it, we repeat it to others.  And thus, we became part of the misinformation dissemination network.  In order to restore our Constitutional Republic with its federal form of government, we must rediscover how to think and analyze. And then, we must boldly say, “They don’t have authority under The Constitution to do that!”

1 Educators no longer teach “rules of construction”, because it has become the dogma of our time that texts have no “objective meaning” to be discovered.  Instead, each person is to come up with his own “understanding” – and one person’s “understanding” is as good as another’s.  Someone recalled the following incident which occurred in his high school English class during 1960:  The class read a short story, and then the teacher asked each student to say what the story meant to him.  Whatever a student said was praised by the teacher.  But when it was my friend’s turn, he said:  “It doesn’t matter what it means to me – what matters is what the author meant.”  The teacher was not pleased with this ‘out of place’ comment.  Is it any wonder many judges feel free to “understand” the Constitution any way they please?  They were conditioned in school to “think” this way; and they did not resist the conditioning.

3 It has been said that Charles Dickens’ works were pirated, printed and sold in these United States without paying any royalties to Dickens!  A copyright treaty with Great Britain would have discouraged this theft of Dickens’ intellectual property.