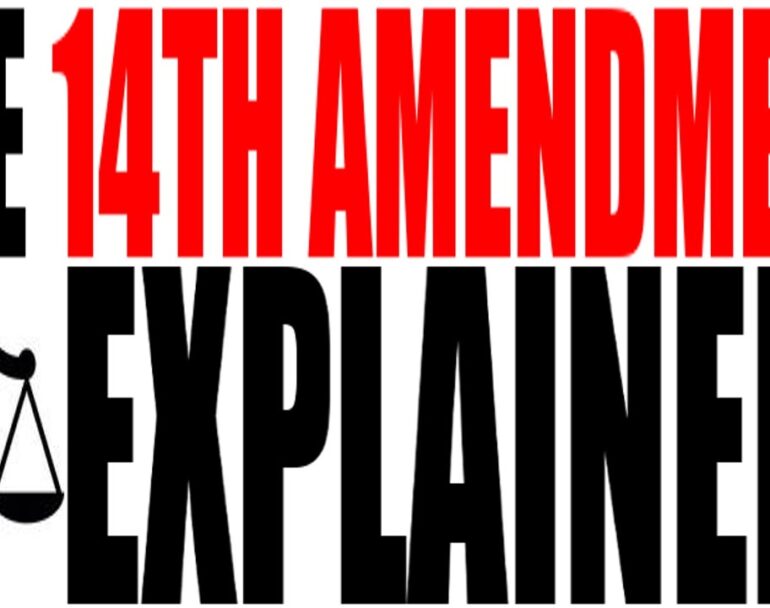 In a previous Constitution 101 post, I established that the Bill of Rights was not originally intended to apply to the states.

But lawyers and other supporters of federal courts policing rights at the state and local level will point to the 14th Amendment. They argue that it “incorporates” the Bill of Rights and applies it to state governments.

It wasn’t until 1925, some 57 years after ratification, that the Supreme Court mystically found the concept of incorporation in the 14th Amendment. In the 1873 Slaughterhouse case, the Court rejected the idea that the privileges and immunities clause in the 14th Amendment applied the Bill of Rights to the states.

Was it the purpose of the fourteenth amendment, by the simple declaration that no State should make or enforce any law which shall abridge the privileges and immunities of citizens of the United States, to transfer the security and protection of all the civil rights which we have mentioned, from the States to the Federal government? And where it is declared that Congress Shall have the power to enforce that article, was it intended to bring within the power of Congress the entire domain of civil rights heretofore belonging exclusively to the States?

We are convinced that no such results were intended by the Congress which proposed these amendments, nor by the legislatures of the States which ratified them.

When we carefully examine the congressional debates and the arguments during ratification of the 14th, it becomes pretty clear the Court was correct in its opinion.

The 14th Amendment was clearly intended to constitutionalize the Civil Rights Act of 1866. This was asserted over and over again both in the congressional debates and as supporters presented the amendment to the states.

Sen. Lyman Trumbull (Ill.) guided the 14th through the Senate. In a speech in Chicago as the amendment was being debated, he “clearly and unhesitatingly declared Sec. 1 of the Amendment to ‘be a reiteration of the rights as set forth in the Civil Rights Bill.’” Martin Thayer (R-Pa.) declared, “It is but incorporating in the Constitution the principle of the civil rights bill which has lately become a law.” Indiana Senator Henry Smith Lane reaffirmed Trumbull’s views, as did several other congressmen addressing their states. West Virginia Rep. George Latham said, “The civil rights bill, which is now a law…covers exactly the same ground as the amendment.” Howard Jay Graham, an advocate of an abolitionist reading of the amendment said, “Virtually every speech in the debates on the amendment – Republican and Democrat alike – said or agreed that the amendment was designed to embody or incorporate the Civil Rights Act.”

Those who argue that the 14th Amendment was intended to apply to the states primarily rely on Rep. John Bingham, the principle framer.

But, as one historian put it, “Bingham is one who used ringing rhetoric as a substitute for rational analysis.” His statements surrounding the 14th bear this out.

On the one hand, he did indeed argue at times for an enforcement of the Bill of Rights on the states. On the other hand, he argued vehemently against inclusion of the phrase “civil rights and immunities” in the 1866 Civil Rights Act, saying it could be interpreted to strip rights from the states. He was afraid the bill would empower to federal government to force his state of Ohio to enfranchise blacks. As much as northern states wanted to protect the basic rights of freed slaves, they certainly did not want to give up their own sovereignty and power. Bingham himself conceded this point.

The care of the property, liberty and the life of the citizen, under the solemn sanction of an oath imposed by your Federal Constitution, is in the States, not in the Federal Government. I have sought to effect no change in that respect in the Constitution of the country.

While Bingham was an important figure in framing the Fourteenth, his opinion, even if you can flesh out exactly what that was, does not define the amendment’s meaning. A Supreme Court Justice Felix Frankfurter wrote, “Remarks of a particular proponent of the Amendment, no matter how influential, are not to be deemed part of the Amendment. What was submitted for ratification was his proposal, not his speech.” Bingham’s confused commentary aside, the intent of the Congress was clearly to constitutionalize the Civil Rights Act of 1866, and we must look to it to understand the scope of the amendment.

Sen. Jacob Howard was another figure responsible for bringing the Bill of Rights into the discussion of the Fourteenth, and his role actually carries more weight than Bingham’s. As the spokesperson for the joint committee that drafted the 14th Amendment, Howard introduced it to the full Senate in a speech. He mentioned the Bill of Rights in a single sentence after reading the privileges and immunities from Corfield saying “to this should be added the personal rights guaranteed and secured by the first eight amendments.”

But Howard was not supposed to be the one introducing the amendment in the first place. The committee chairman was sick and he filled in at the last minute. There is every indication that Howard “went off script.” It is also notable that he was one of the most radical Republicans in the Senate and not representative of the prevailing point of view. Howard’s notion was brushed aside as the debates went on. Even Howard later backed off, saying the goal was to legitimize the Civil Rights Act of 1866. It’s also important to note that no mention was made of applying the Bill of Rights to the states when the bill was introduced in the House.

Horace Flack (a supporter of incorporation) did a thorough analysis of “speeches concerning the popular discussion of the Fourteenth Amendment.” He wrote:

The general opinion held in the north…was that the amendment embodied the Civil Rights Act…There does not seem to have been any statement at all as to whether the first eight amendments were to be made applicable to the states or not.

In fact, had this been the understanding, the people of the north would have rejected the amendment.

The vast weight of evidence from both the congressional debates and the ratification debates supports a limited view of privileges and immunities as defined by the Civil Rights Act of 1866, not an incorporation of the Bill of Rights.

This is a complex issue that can hardly be covered in a single article. I highly recommend Raoul Berger’s Government by Judiciary. It is the seminal scholarly work on the 14th Amendment.