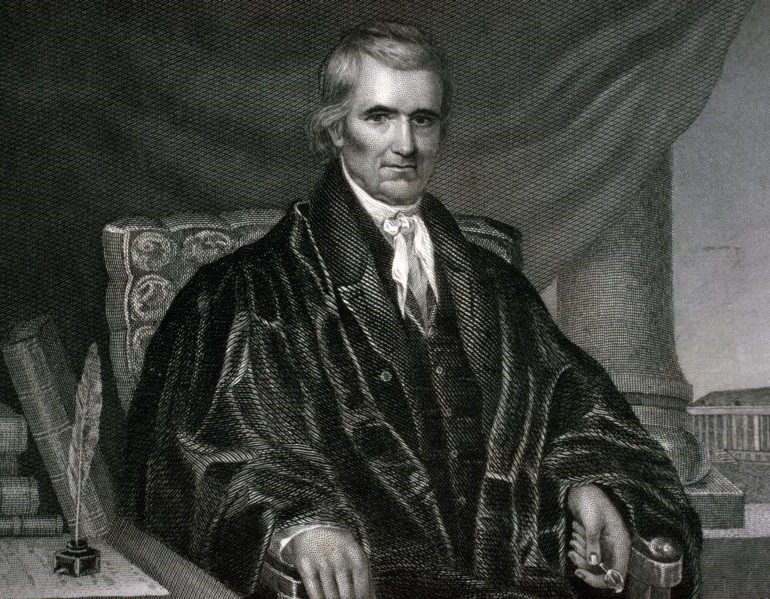 Professor Nelson Lund’s Liberty Forum essay on this 200th anniversary of McCulloch bears a title that sums up his bottom-line assessment: “The Destructive Legacy of McCulloch v. Maryland.”Lund attributes to Marshall’s opinion in this case “the effective destruction” of “the principle of limited and enumerated powers.”

The problem with this assessment is that Lund relies on an aggressively nationalist interpretation of the opinion. Because of the looseness of Marshall’s reasoning connecting the implied power to incorporate a bank to particular enumerated powers, and the opinion’s “airy silence” about certain features of the Bank, Lund contends, it has been “easy to treat McCulloch” as a “blatant invitation to congressional overreaching.”

Such an interpretation has admittedly been widely accepted for at least the last century. We see it, for example, in the praise Albert Beveridge lavished on McCulloch in the fourth volume of his epic Marshall biography, which was published in 1919. “In effect,” said Beveridge,

John Marshall thus rewrote the fundamental law of the Nation; or, perhaps it may be more accurate to say that he made a written instrument a living thing, capable of growth, capable of keeping pace with the advancement of the American people and ministering to their changing necessities. This greatest of Marshall’s treatises on government may well be entitled ‘Vitality of the Constitution.’

Indeed, the interpretation of McCulloch as an aggressively nationalist opinion goes right back to the very beginning of its reception history. This was the core charge leveled by Spencer Roane, William Brockenborough, and other states’ rights theorists in their contemporaneous criticisms.

Love it like Beveridge, or hate it like Roane, McCulloch has appeared to many to have adopted or invited others to adopt a very broad interpretation of national powers. But I believe these appearances are deceiving.

The Arguments Marshall Deliberately Did Not Make

In my estimation—which I will not attempt to justify here but invite others to assess on their own—David S. Schwartz’s detailed analysis in his 2015 article “Misreading McCulloch v. Maryland” provides a more persuasive interpretation than Lund does of McCulloch’s discussion of the scope of congressional powers. In particular, Schwartz examines not only the arguments that the chief justice accepted, but also those pro-Bank arguments that he could have made but chose not to. According to Schwartz, Marshall “painstakingly avoided giving a broad interpretation to any enumerated power in a systematic effort to steer clear of any controversy over concrete questions of national power.”

If Schwartz is right about what Marshall was up to, then the terseness of the latter’s treatment of the relationship between the implied power to incorporate a bank and particular enumerated powers like the power to raise revenue or to regulate commerce among the several states appears in a different light. While Lund credits Marshall with formulating a “carefully calibrated” test for identifying improper exercises of Congress’s impliedpowers, he criticizes Marshall for faltering in its application: “Unfortunately, McCulloch does little more than gesture vaguely at the contribution a bank can make to the exercise of Congress’s enumerated powers.” Lund contrasts Marshall’s purported imprecision with Alexander Hamilton’s defense of the First Bank of the United States, in which the Treasury secretary “analyzed in considerable detail the relation between the establishment of a bank and the indisputably legitimate congressional powers over commerce, borrowing, paying the government’s debts, and national defense.”

Marshall could have explicitly drawn the connections that Lund thinks he ought to have. He was fully conversant with Hamilton’s arguments and could have more fully endorsed the constitutional underpinnings of Hamiltonian political economy in ruling on the constitutionality of the Bank. Putting the power of the Court behind Hamilton’s more detailed arguments would have been the aggressively nationalist thing to do. But Marshall instead chose to say as little about the enumerated powers as necessary to support the Court’s conclusion. According to Schwartz, Marshall’s opinion in McCulloch reflects tactical avoidance, not an invitation to overreach. By not saying much about the enumerated powers, the opinion avoided unnecessarily committing the Court to a position on the constitutionality of a uniform national currency, congressional control over the monetary system more generally, or congressional authority to make internal improvements.

To be sure, this perspective on McCulloch’s discussion of implied powers does not rescue this part of the opinion from criticism. Studied vagueness in judicial opinions leaves them vulnerable to later exploitation, and later interpreters did exploit McCulloch. But this perspective redirects more of the responsibility toward those later interpreters. By crediting Marshall with having underwritten an approach to congressional power that he seems to have studiously sought to avoid, Lund’s critique assigns too much comparative blame to Marshall and not enough to exploitative adopters of portions of his reasoning in McCulloch.

In further defense of Marshall’s approach to congressional power in McCulloch, one might also observe that the particular question of federal power to incorporate the Second Bank of the United States was not really that difficult by that point in time. Lund notes some of the evidence for this in his discussion of President Madison’s determination that his prior constitutional objections were “precluded . . . by repeated recognitions under varied circumstances of the validity of such an institution in acts of the legislative, executive, and judicial branches of the Government, accompanied by indications in different modes, of a concurrence of a general will of the nation.”

Closer to home for the chief justice, it is revealing that while Marshall was selling his Bank stock in order to avoid a conflict of interest in hearing McCulloch, his states’ rights nemesis Spencer Roane was helping his son William to buy shares in the Second Bank. Indeed, one such purchase was completed just three days before oral argument in McCulloch began. This was the same Roane whom Marshall battled in pseudonymous newspaper essays after McCulloch was decided. Roane’s objections were less to the conclusion that the Second Bank was within Congress’s power than to the reasoning in Marshall’s opinion that Roane viewed as harming states’ rights.

A similar defense of the tactic of not saying much because not much needed to be said cannot be made with respect to the case’s other main issue: whether the Second Bank was immune from state taxation. I concur with Professor Lund’s assessment that McCulloch’s analysis of the Bank’s implied immunity from Maryland’s tax is “weaker” than its discussion of Congress’s power to create the Bank. As Lund points out, one would never know from Marshall’s opinion in McCulloch that the Second Bank was privately owned and operated even though federally incorporated. In this respect, it was a very different kind of instrumentality from the U.S. Mint or the U.S. Post Office, two public federal instrumentalities that the Court’s reasoning protected from state interference. Nor does Marshall explicitly confront the argument that, even if it were in Congress’s power to create the Second Bank as an instrumentality exempt from state taxation, it needed to have provided for that exemption explicitly.

Marshall’s failure to address these issues in McCulloch ultimately gave rise to Osborn v. Bank of the United States, decided five years later. The Ohio legislature passed a tax on the Second Bank’s Ohio branches after the Court decided McCulloch. In so doing, Ohio legislators treated the authoritativeness of McCulloch much like Abraham Lincoln would later treat the authoritativeness of Dred Scott. They claimed that they were not bound by the decision in McCulloch and that McCulloch’s tax-immunity holding was incorrect. When the deadline for the Bank to pay the tax had passed, individuals acting at the direction of Ohio state auditor Ralph Osborn proceeded to forcibly collect it from the Chillicothe branch’s vault. The litigation surrounding these events eventually ended up before the Court in 1824 in Osborn.

To the credit of Marshall and his brethren, the Court in Osborn did not simply rest on the authority of McCulloch. Instead, Marshall’s opinion for the Court squarely addressed, and rejected, Ohio’s arguments distinguishing federal instrumentalities that were public institutions like the U.S. Mint and the U.S. Post Office from the privately owned Second Bank. The Court also explained why its determination about the Second Bank’s implied immunity was correct, rather than simply saying that it was so because the Court had already said as much. Indeed, Marshall’s explanation of why “it is not unusual, for a legislative act to involve consequences which are not expressed” excluded the possibility that the Court could ever make something so simply by saying so. This explanation contains Marshall’s most notable statement on the nature of the distinctive power exercised by judges: “Judicial power, as contradistinguished from the power of the laws, has no existence. Courts are the mere instruments of the law, and can will nothing.”

The Supreme Court today sometimes acts as if it is exercising a different kind of power than the judicial power as described by Marshall in Osborn. It occasionally treats its own decisions as if they make rather than declare the law. This can be seen in the Court’s explicit claim of a particularly modern kind of judicial supremacy: The moment the Supreme Court decides a constitutional case, that case becomes the law of the Constitution for everybody. For example, in Cooper v. Aaron(1958), the Court equated the obligation of officials to adhere to the Court’s interpretation of the Constitution in Brown v. Board of Education (1954) with those officials’ obligation to adhere to the Constitution itself.

If Cooper-style judicial supremacy had prevailed at the time of McCulloch, the Ohio legislators who voted for the post-McCulloch tax would have not just been taking a chance on the state’s losing litigation over the constitutionality of the tax; they would have also been affirmatively violating their oath to uphold the Constitution in voting for that tax. And the Supreme Court would likely not have bothered to address Ohio’s arguments but instead simply have chastised state officials for not obeying McCulloch’s tax holding.

That the Court took the better path of addressing Ohio’s criticisms of McCulloch straight on in 1824 is a counterexample that remains available to anyone today who attempts to project Cooper-style judicial supremacy back on to McCulloch, or to attribute to the 1819 opinionmore power than the strength of its reasoning deserves. I therefore heartily join Professor Lund in his call “to stop forgetting that the Constitution is more authoritative than what the Supreme Court has said about it.” And the principal addressee of this exhortation should be the Supreme Court itself. The ultimate misreading of McCulloch v. Maryland is to mistake a debate over the law in McCulloch for a debate over the law of the Constitution.