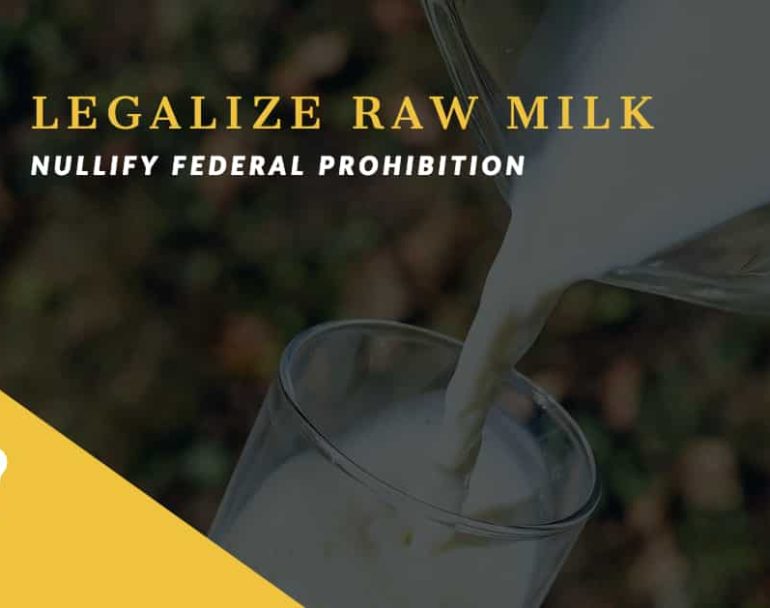 JUNEAU, Alaska– Last week, the Alaska House passed a bill that would legalize raw milk and herd share agreements for the distribution of legalized raw milk in the state. Passage into law would take an important first step toward rejecting a federal prohibition scheme in practice and effect.Rep. Geran Tarr introduced House Bill 22 (HB22) on Jan 8. The proposed law would legalize raw milk shares through part ownership of livestock, commonly known as herd shares. Under the law, any individual willing to pay another individual for the upkeep of milk-producing livestock would also be able to share raw milk and other things produced from the legalized raw milk of those shared animals.

On May 6, the House passed HB22 by a 38-1 vote.can begin a sort of economic feedback loop that will rapidly expand the market. When that happens, lawmakers will feel pressure to further loosen regulations.

Currently, in Alaska, it is illegal to sell raw milk to the public. It can only be sold to a milk processing plant, or for animal food.

Passage of HB22 would take the first step toward legalizing unpasteurized milk in the state. While limited in nature, allowing raw milk distribution through herd sharing creates a great opportunity to establish a market, and will demonstrate and stimulate demand for raw milk. As more people engage in the marketplace, more people will learn about the benefits of unpasteurized milk. That stimulates demand. Simply cracking the door

Not only do the feds ban the transportation of raw milk across state lines; they also claim the authority to ban unpasteurized milk within the borders of a state.

When states allow the sale of legalized raw milk within their borders, it takes an important step toward nullifying this federal prohibition scheme.

We’ve seen this demonstrated dramatically in states that have legalized industrial hemp. When they authorized production, farmers began growing industrial hemp, even in the face of a federal ban. Despite facing the possibility of federal prosecution, some growers were still willing to step into the void and begin cultivating the plant once the state removed its barriers.

HB22 will now move to the Senate. It was referred to the Senate Resources Committee where it must pass by a majority vote before moving forward in the legislative process.