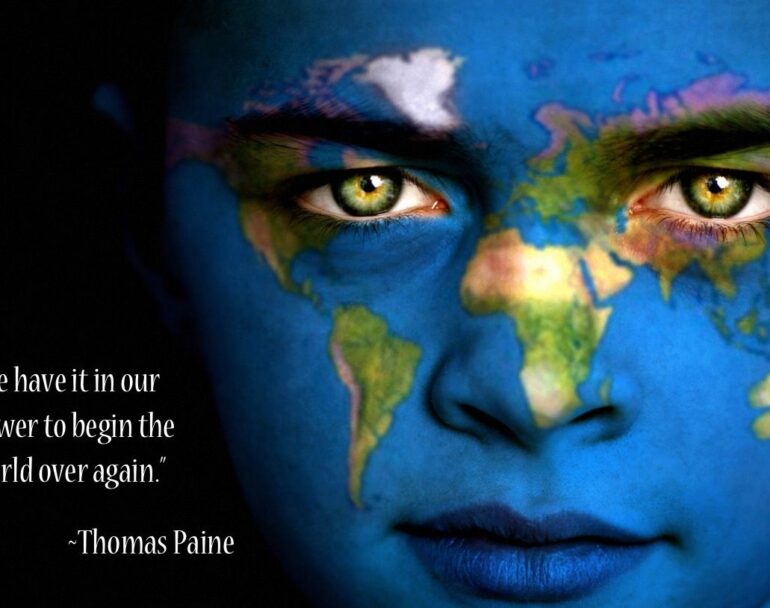 In the Appendix to Common Sense, first published on January 10, 1776 – Thomas Paine wrote about the “birthday of a new world,” with this timeless reminder that fits today – and every single day of the year:

“We have it in our power to begin the world over again.”

With that reminder as our foundation today – I wanted to share with you 9 more of my favorite quotes from leading founders that set the stage for how we’re approaching things in 2021, and beyond. I present them without comment – the words speak for themselves.

I suppose my dear Sir, that the good people of the U. States in their late generous contest, contended for free government in the fullest, clearest, and strongest sense. That they had no idea of being brought under despotic rule under the notion of “Strong government,” or in form of elective despotism: Chains being still Chains, whether made of gold or iron.
-Letter to Samuel Adams (5 Oct 1787)
Podcast episode on this topic here

“When our rights are invaded, it is high time to throw aside prudence, and believe me my countrymen, he is not worthy your suffrages who on such an occasion wou’d prudently resign them for the sake of peace. He that is afraid to speak his mind, and is for suffering injury, injustice or oppression, rather than disturb public tranquility or more properly dangerous security, is not to be confided in; for it is always safer to oppose any the least infraction of our happy constitution, than prudently to acquiesce for the preservation of peace.”
Writing as “Freeborn American” (27 Apr 1767)

“Let there be no change by usurpation; for though this, in one instance, may be the instrument of good, it is the customary weapon by which free governments are destroyed. The precedent must always greatly overbalance in permanent evil any partial or transient benefit, which the use can at any time yield.”
-Farewell Address (19 Sept 1796)
Video and Podcast: George Washington’s Warnings

“The people themselves have it in their power effectually to resist usurpation, without being driven to an appeal to arms. An act of usurpation is not obligatory; it is not law; and any man may be justified in his resistance.”
-Speech in the Mass. Ratifying Convention (23 Jan 1788)
Video and Podcast: How to Deal with Unconstitutional Acts

“Abuse may happen in any government. The only resource against usurpation is the inherent right of the people to prevent its exercise. This is the case in all free governments in the world. The people will resist if the government usurp powers not delegated to it.”
-Speech in the N.C. Ratifying Convention (29 Jul 1788)

“Show me that age and country where the rights and liberties of the people were placed on the sole chance of their rulers being good men, without a consequent loss of liberty! I say that the loss of that dearest privilege has ever followed, with absolute certainty, every such mad attempt.”
-Speech in the Virginia Ratifying Convention (5 Jun 1788)

“The truth is, all might be free if they valued freedom, and defended it as they ought.”
-Essay in the Boston Gazette (14 Oct 1771)
Video and Podcast: American Independence

“Should an unwarrantable measure of the federal government be unpopular in particular States, which would seldom fail to be the case, or even a warrantable measure be so, which may sometimes be the case, the means of opposition to it are powerful and at hand. The disquietude of the people; their repugnance and, perhaps refusal to cooperate with officers of the Union, the frowns of the executive magistracy of the State; the embarrassment created by legislative devices, which would often be added on such occasions, would oppose, in any State, very serious impediments; and were the sentiments of several adjoining States happen to be in Union, would present obstructions which the federal government would hardly be willing to encounter.”
-Federalist No. 46 (29 Jan 1788)
Video and Podcast: How to Stop Federal Programs

“A fee people claiming their rights, as derived from the laws of nature, and not as the gift of their chief magistrate”
-A Summary View of the Rights of British America (1774)
Video and Podcast: Thomas Jefferson’s Vision

As we kick off the New Year, we’re rolling up our sleeves every single day to take a stand for the Constitution and liberty against the largest and most powerful government in the history of the world.

Getting the job done won’t be easy, but no matter what the odds, it’s essential to do what’s right. And for us at the TAC, that’s the Constitution: Every issue, every time. No exceptions, no excuses.

Together with your help, we’ll continue setting the foundation for liberty in 2021 and beyond. Thank you for being here with us!