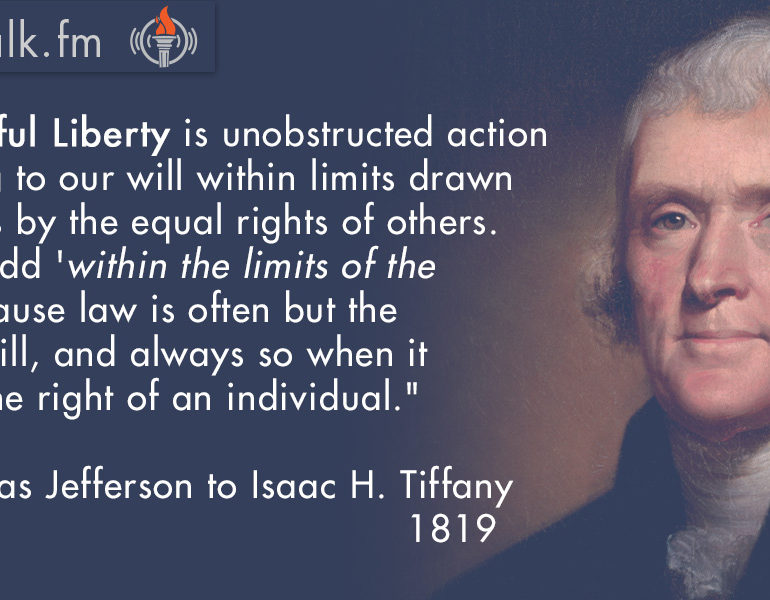 I cannot compete with Michael Munger, Nathan Schlueter, or Nikolai Wenzel in citing the authorities of libertarian and classical liberal thought. Being more a lumper than a splitter, I would instead put both libertarianism and classical liberalism in the same category, as followers of the “simple principle” that John Stuart Mill announced in On Liberty (1859):

The sole end for which mankind are warranted, individually or collectively, in interfering with the liberty of action of any of their number, is self-protection. . . . The only purpose for which power can be rightfully exercised over any member of a civilized community, against his will, is to prevent harm to others. . . .The only part of the conduct of anyone, for which he is amenable to society, is that which concerns others. In the part that merely concerns himself, his independence is, of right, absolute. Over himself, over his own body and mind, the individual is sovereign.

David Hume made much the same claim in the 1770s. After telling the story of the rise of liberty in England from the Saxons to the Glorious Revolution, Hume highlighted this principle, writing that

. . . every subject of England had entire power to dispose of his own actions, provided he did no injury to any of his fellow-subjects; and . . . no prerogative of the king, no power of any magistrate, nothing but the authority alone of laws, could restrain that unlimited freedom. The full prosecution of this noble principle into all its natural consequences, has at last, through many contests, produced that singular and happy government, which we enjoy at present.

Freedom is the default position as long as others are neither injured nor harmed. When others incur such harms or injuries governments are rightly able to exercise a power of restraint.

Two great thinkers, different in so many ways, converge on the usefulness and even the nobility of the libertarian-classical liberal principle. Why? This principle of liberty seems attractive given the excesses that arise from man’s social and political nature. It is natural for citizens to demand conformity from their fellow citizens and to use restrictions in ways that benefit themselves but are adverse to the public good. This tendency toward orthodoxy may manifest as a demand for conformity to religious beliefs or conformity to prevailing understandings of virtue. Hume’s History of England is rife with the tyrannical effects of martial valor, superstitious orthodoxy or enthusiasm. Human beings tend to confuse their own ideas of the good with what is necessary to sustain the public. The very idea of a political community suggests that citizens hold things together in common but can take that holding in common too far.

At this time and place, this simple principle of liberty seems quite attractive. Those who control the levers of public power often wield that power at the expense not only of individual liberty, but of the right free people have to associate. Private charities are crowded out by state action. Anti-discrimination laws compromise private organizations and private transactions. Cronyist economic policies inhibit economic growth and stifle opportunity. More and more private organizations are suffocated by a homogenizing state power. The simple principle of liberty provides a procedure for living together with diversity in our divided age. In many ways, I wish those who make arguments on behalf of individual liberty Godspeed. Most of the time their arguments are put in the service of indispensable public goods. Go “Directionalists!”
However, the simple principle of liberty does not provide an adequate governing philosophy. While it does check the excesses of man’s social nature, it does not do justice to man’s political nature and it does not allow for an adequate expression of man’s social nature. It abjures a defense of the human good and instead embraces a procedural understanding of political communities. It teaches an ethic of expressive individualism that is ultimately hostile to marriage and family life.

In the economic realm, the principle of liberty should limit government and emancipate individuals to pursue their own good in the open market. Who would deny that this principle, even though only incompletely applied, has fostered the great abundance and prosperity of modern society? Yet, at the same time as prosperity has spread, the limits on government have been shredded. With prosperity have come an expanded welfare state, a bigger regulatory state, and very little satisfaction from that prosperity. Free markets and big government are a package deal, and it is best to know why rather than to wail about the reality.

What is it about human beings that makes them go beyond the “simple principle” when building welfare states or requiring recognition of same-sex marriage from private associations? Teach people the simple principle of liberty and they still must live with one another—and they want to live with one another. That means there will be communal standards and a common way of life, which in turn means that communities may place restraints on the spread of the “simple principle.” These social features of human nature are as much a part of our mental furniture as the love of liberty—perhaps more so.

I remember, years ago, the late great Peter Lawler asking a question of a libertarian-leaning scholar at an academic conference. The premise of Lawler’s question was that you couldn’t be a political philosophy guy and a libertarian. I take Lawler to have meant that anyone who takes the truth of ancient political thought seriously cannot easily accept the distinction between private and public on which libertarian thought rests. Every law and every custom shapes the political community. Every ruling philosophy reflects a regime. We are never a mere collection of individuals.

These I take to be central deliverances of ancient political science, in both Aristotle and Plato. We live in a cave. Citizens in a political community share, to some extent, common ideas of the advantageous, just, and good. These common ideas are the basis of “civic friendship.” Civic friendship is an indispensable part of how individuals devote themselves, when necessary, to the public good. Moreover, since human beings are social and political creatures, an important element of civic solidarity serves personal happiness and fosters human flourishing.

Even a society dedicated to liberal principles has, and requires, a common public morality (to use Harry Clor’s formulation). The libertarian-classical liberal principle is a public morality of expressive individualism that, in some of its expressions, makes life worse for many people by compromising the cultivation of character for the long-term survival and thriving of a country. A shared moral outlook of trust, devotion to one’s political community, honesty, industriousness, tolerance, and other moral virtues will not arise spontaneously and does not sustain itself without intentional actions. At least some of these actions will be supported through laws that violate the simple principle of liberty.

The most crucial limits on the simple principle of liberty will surround marriage, family life, and the cultivation of character in the young. No liberal society can thrive or even survive without some mutual affection and devoted common action between husbands and wives. Here, it seems that the triumph of the simple principle of liberty has caused no little amount of mischief in the contemporary world. Many of the social ills that undermine relatively healthy family life have been propagated through the simple principle of liberty. I am talking about the public acceptance of divorce, the spread of pornography, our libertarian attitudes toward sexuality, and the waning interest that adults have in becoming responsible parents. So, as I have argued elsewhere (in a piece entitled “Can the State Be Neutral on Marriage?”), the “simple principle,” through its unwillingness to acknowledge prudent limits, indirectly undermines the healthy character on which liberal society rests.

Therefore let me second Nathan’s point: that philosophies based on a “simple principle” reflect an insufficiently robust conception of human nature. To wit, the simple principle of liberty undermines community and compromises character by compromising the family. As common identity and the family are necessary for the survival of liberal society—or any society—I cannot believe that modes of thinking based on the “simple principle” alone suffice for a governing philosophy. The principle works when a country has a moral people, but it doesn’t make a moral people.