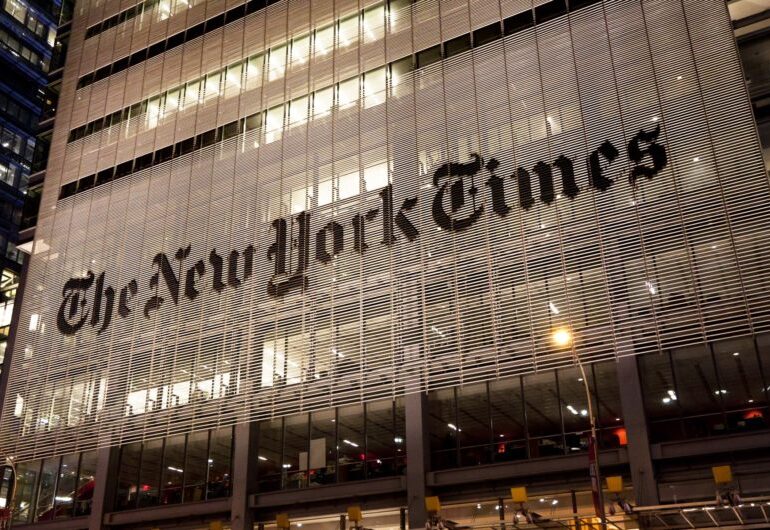 An American Senator published an op-ed in the New York Times expressing the political opinion of half the nation, and indeed included the kind of evidence the Times would require for that claim of majority representation—polling, in this instance. The subject was the burning American cities that many progressives claim we should take in stride, but which most of the rest of the country believes should be forcibly stopped, if necessary by the military. As a result, the Times first apologized for publishing the op-ed but left it online, and then forced the resignation of the editor who supervised it.

Once more, the woke mobs have gotten both the sacrificial victim they wanted—a Progressive journalist, an op-ed editor at that, was fired for foolishly believing that liberals are sophisticated people who take an intelligent interest in what’s happening in America—and the cowardly apology that humiliates the most prestigious institution involved in political opinion in America. The Times got something it desperately craves—attention—at the cost of shedding yet another piece of its credibility. The world’s slowest, most boring act of political striptease continues at the Grey Lady.

Senator Tom Cotton has thus achieved something rare in our debased political environment. He acted as a principled partisan should—he stood up for his electorate and the claim to justice of conservatism, while forcing his opponents to take note of his speech in such a way that it divided them and sent them into a crisis that reveals their contradictions. This is in itself admirable as political acumen, but surprisingly easily accomplished.

The Times accepted the op-ed, despite its shameful later behavior, because it needs to claim intellectual superiority over the raging madmen (and, in the interests of inclusivity, madwomen, mad trans-people, and whoever else…) to whom it has conceded moral superiority, up to and during riots where people run cops over in cars, or stab them, or shoot them, or, well, whatever other criminal ideas they concoct for sowing chaos.

This shocking violence is no problem for our liberal elites, since the various factions of the Democratic Party, though divided over some intellectual concerns, have no moral differences. The old line, no enemies to the left, still describes the politics of Progress. Holy victims give the political movement a badly needed coherence and, really, the only way to mobilize the electorate in anger against the right. To some, what we’ve been seeing are riots—but to others, it’s just a very efficient Get Out The Vote operation for the young and ethnic minorities.

An intelligent liberal might even think that, from the point of view of justice, all the destruction and madness is deserved, since it’s these young people and ethnic minorities not voting that led to the Trump presidency in the first place. More than justice, however, the riots are driven by necessity. Progressives recognize that only anger can lead Democrats to victory after they nominate America’s first zombie contender for the presidency, Joe Biden.

Sen. Cotton is right to force liberals to embrace the burning of cities as an electoral platform, that America might have a clear choice between the loving supporters of riots and the party of law and order. This has been the Republican strength in presidential elections ever since 1968, when Americans turned out not to love the bleeding-heart liberals who shrugged as cities burned. If liberal piety requires such fire, we might begin to question their sanity.

The Times briefly tried to have it both ways. First, they clung to a fanatical belief in the justice of the oppressed burning things down night after night, looting, beating people up or killing them, and then offered a show of liberal sophistication in hearing all sides of the story.

The Times wants to limit fanaticism by subtly threatening most liberals: Move left, you lose elections. Without that claim of superior political acumen, why wouldn’t activists simply take control of the means of the production of propaganda? So, the Times tried to profit by publishing Cotton as a warning: Embrace elite liberalism, or you will lose to conservatives who want to call in the Army to quell the riots.

The Political Uses of Racism in America

Liberals agree with fanatical Progressives that America is the most evil regime in existence, stained by systemic racism—a claim which former Republican president George W. Bush, apparently, also believes—but hope to restrain the hysteria that follows from that opinion by pointing out that racists might vote for racism, and therefore Progress could lose. It takes institutional control to effect change; riots, however necessary, won’t suffice to end government with consent.

This week, the Times and the elite liberalism for which it speaks have lost. Encouraging people to believe their country is evil and their everyday unhappiness is the fault of a monstrous majority, an evil democracy of historic proportion, has backfired. Far from making Progressive activists or poor people or ethnic minorities obey the wealthy liberals and their organ of propaganda, the Times, it has led to hatred of them. That’s because the 1619 Project has achieved everything liberals wanted: It won Pulitzers, it was consecrated with human sacrifices in the streets of American cities, and it will be taught in schools.

But this does not mean the politics of racism has failed. Remember Marx’s dictum: history repeats itself, first as tragedy, then as farce. We can believe that liberals in the 60s were shocked that their civil rights rhetoric and legislation were followed by race riots in the Northern cities, which were supposed to be such paradises that blacks would gratefully obey liberals. But today, liberals encourage race riots as a political necessity. That’s progress, in a way.

The full politicization of human life cannot happen while people care about their families more than about politics.

Our riots, therefore, are no accident. They are a political necessity that follows from a psychological necessity—desire defeated returns as revenge. The promises of Progress have not been working out. Urban black men, in particular, are not progressing in any of the ways human beings naturally desire to progress. When love loses, only anger remains. Whatever liberal city governments and ownership of the federal redistribution-welfare state were supposed to achieve, they have failed. Violence must follow.

Perhaps liberals once believed in the most beautiful fantasy of Progress—a world without pain or injustice, where freedom and equality are the same thing, where everyone is rich and healthy, where everyone is himself or herself (or another pronoun), but also loved and accepted by everyone else. But that time has passed. Now we are dealing with the desire for revenge that follows the disappointment. Paradise has vanished, but nihilism is all around. If life has failed to satisfy, perhaps death is better.

Justice is Not as Important as Happiness

The lie liberals are assiduously telling is that they care very much about justice, especially for black people. If justice is tied to the laws, then they obviously do not. What Sen. Cotton wanted—calling in the military to enforce the most basic rule of law—doesn’t concern liberals. It doesn’t matter how many black people lose their homes or businesses, their only livelihood, the reward of their hard work and decency. The more the merrier, indeed—the more black people suffer, the more liberals can accuse conservatives like Cotton of racism.

Unhappy people feel they have nothing to lose and are eager to blame America for their unhappiness. Liberalism’s control of social policy and the family in America has made many urban poor people miserable. A new class division was created where, if you’re poor, you don’t get a husband or a father. That’s a terrible thing to do to the poor, but liberal privilege is not something we talk about.

In a way, this, too, is Progress. The full politicization of human life cannot happen while people care about their families more than about politics. People who have no families are presumed not to be able to resist politicization, since they cannot dedicate themselves to the love and friendship that makes private life worth living, but they are at the same time not protected by community, association, and experience from the ideological temptation to blame the fantasy of systemic racism for their misery. Their private unhappiness thus is transformed into a political fact. This doesn’t ever lead back to the missing families and communities, but instead human nature itself has to be enslaved to the institutions that liberals want in charge of our lives and minds.

Cotton surely already knows all this. When the Times tried to use him as a boogeyman to scare its more fanatic following into obedience, he instead used their own weapons against them and weakened the liberals—revealing both their cowardice and the cruelty it breeds: They offered sacrifices to the mob, humiliating its employees, an image of the far worse suffering of victims of the riots.

Liberal elites are willing to sacrifice any part of the nation, but they have especially taken to speaking hatefully of white people poorer than themselves, because they are themselves deeply unhappy. While their piety demands they continue to go through the ritual motions, they no longer believe Progress leads to paradise. Without that beatific vision, all that’s left is the history of oppression, racism, sexism, and all the other sins hung around America’s neck. Liberal elites resemble the rioters—this is why so many well-to-do white people are justifying the protests and rioting, if not helping perpetrate the destruction. It’s not solidarity against racism—it’s the only publicly acceptable excuse for hatred.

Liberals must be stopped and the laws defended. Conservatives must then become serious again about what it means for family to be the basis of society, what it means to take citizenship seriously, work to give people dignity, and perhaps most importantly, recreate a space for the poor to have the hope of bettering their lot and that of their children. We cannot restore civil peace without a reasonable promise of happiness. Without it, people resort to revenge and liberals will keep doing this to the country. They themselves never pay any price, after all.