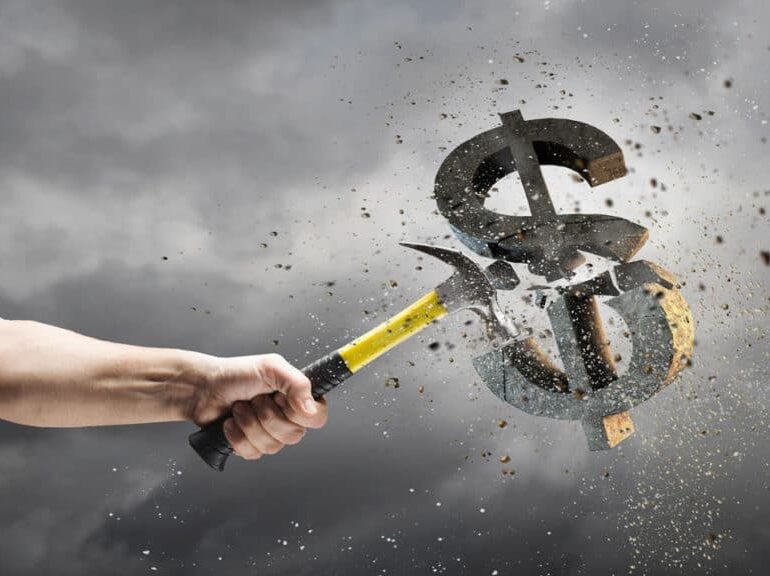 It certainly acts that way. The federal government is always looking for new things to tax.

The most obvious tax is the income tax. However, the federal government also taxes things like gasoline, tobacco, alcoholic beverages, airfare, etc. These are excise taxes, meaning they are levied on an individual product. In some cases, manufacturers pay the tax during production. In other cases, the consumer pays at the time of purchase.

Excise taxes can be used to raise revenue, but they are also used to “modify” behavior.

For instance, gun control supporters proposed a 1000 percent federal tax on AR-15-style rifles. There wasn’t even a pretense of levying this tax to raise revenue. In their minds, a tax that turns a $1,200 rifle into a $12,000 rifle is perfectly justified in order to make the cost of gun ownership prohibitively expensive.

At what point did the federal government begin reading the constitutional taxing power so broadly it could become an instrument of social engineering?

Let’s start by examining why supporters of the Constitution insisted the taxing power as delegated in Article 1, § 8 was necessary and proper.

The Federalists argued that Congress’ inability to tax under the Articles of Confederation stymied the government’s ability to pay off its war debt and would also frustrate future borrowing attempts. The Treasury Department estimates that the United States debt was $43 million in 1783. Since Congress could not efficiently tax the states, it was unlikely to ever pay off the debt, or any future debt the general government might incur. This, according to the Federalists, would discourage investors from lending to the United States.

Interestingly, it was not the existence of debt that concerned the Federalists. They were more concerned with finding a way to service debt and make interest payments to bondholders. In fact, the ability of a nation to borrow was a fundamental fiscal policy for many Federalists. In a letter to Robert Morris, Alexander Hamilton wrote:

“A national debt, if it is not excessive, will be to us a national blessing, it will be a powerful cement of our union. It will also create a necessity for keeping up taxation to a degree, which, without being oppressive, will be a spur to industry.”

For Hamilton, borrowing was extremely important for the economic development of the new nation. However, there had to be a way to service the debt. That would require federal taxation of the states, which the Articles blocked. Thus, for the Federalists, a revision of the Articles of Confederation was vital if the country was to prosper. The Constitution had to include provisions for a stronger central government with expanded taxing powers over the states. This would efficiently provide for the common defense and enable the country to pay down its national debt.

The Federalists realized that getting all 13 state legislatures to agree to a change in taxation policy would be impossible. Therefore, they decided to take the much more radical approach of persuading the country to scrap the Articles of Confederation and adopt an entirely new national constitution in its place.

“The authorities essential to the common defense are these to raise armies to build and equip fleets to prescribe rules for the government of both to direct their operations to provide for their support. These powers ought to exist without limitation, because it is impossible to foresee or define the extent and variety of national exigencies or the corresponding extent and variety of the means which may be necessary to satisfy them.”

In Hamilton’s opinion, the federal government could demand unlimited taxation to support the common defense.

Antifederalists, on the other hand, were very leery of the taxing power.

In the Federalist Papers, James Madison offered rebuttals to Antifederalist criticisms of the general taxation power.

First, in Federalist #45, he insisted the state governments would keep federal overreach in check

“Thus, each of the principle branches of the federal government will owe its existence more or less to the favor of the State governments and must consequently feel a dependence… towards them.”

Second, in the same essay, Madison argued that because the role of the federal government was limited, taxation would also be limited.

“It is true that the Confederacy is to possess, and may exercise, the power of collecting internal as well as external taxes throughout the states; but it is probable that this power will not be resorted to, except for supplemental sources of revenue… The powers delegated by the proposed Constitution to the Federal Government… will be exercised principally on external objects, as war peace negotiation and foreign commerce; with which last the power of taxation will, for the most part, be connected.” [Emphasis added]

Madison agreed that the federal government would have the power to tax within the states, but he assured the public that this would probably only be necessary for supplemental revenue. He also assured people that this revenue would principally be for external objects, such as war, peace, negotiation and foreign commerce.

Understandably, Madison’s use of the qualifiers “probably” and “principally” did not satisfy most Antifederalists. And as we have seen, they did not believe claims that a taxing power for limited purposes would serve as a check against its abuse.

Third, Madison contended that there are specific limitations on federal taxation within the Constitution itself.

“It is true, that the Confederacy is to possess, and may exercise, the power of collecting internal as well as external taxes throughout the United States… An option will then be given to the States to supply their quotas by previous collections of their own; and that the eventual collection, under the immediate authority of the Union, will generally be made by the officers, and according to the rules, appointed by the several States.”

It is worth noting that Madison did not say that the people of the states would be taxed directly. Instead, he alludes to a state-based quota system for federal taxation. Madison seems to imply that the federal government would not lay internal taxes on individuals, but that the general government would apportion taxes as a quota to be fulfilled by each state.

This may indeed be the correct interpretation, as Madison did not believe that the Carriage Tax at the center of the Hylton case was Constitutional. However, his meaning is vague. Since the word “quota” does not even appear anywhere in the proposed Constitution what does this term, as used by Madison, even mean?

“The Powers delegated by the proposed Constitution to the Federal Government are few and defined.”

Madison may have believed that he had already defined the Constitution’s limits on federal taxation in Federalist #41.

“It has been urged and echoed, that the power ‘to lay and collect taxes, duties, imposts, and excises, to pay the debts, and provide for the common defense and general welfare of the United States,’ amounts to an unlimited commission to exercise every power which may be alleged to be necessary for the common defense or general welfare. No stronger proof could be given of the distress under which these writers labor for objections, than their stooping to such a misconstruction.”

Madison obviously thought unlimited federal taxation was a misunderstanding of Article I, § 8, Clause 1

He went on to write:

“Had no other enumeration or definition of the powers of the Congress been found in the Constitution, than the general expressions just cited, the authors of the objection might have had some color for it; though it would have been difficult to find a reason for so awkward a form of describing an authority to legislate in all possible cases…”

If by “other enumerations” Madison was implying that the army and welfare clauses were already limitations on federal taxation, the Antifederalists would surely not have been persuaded.

However going back once again to Madison’s belief that the 1794 Carriage tax was unconstitutional (see The Prophetic Antifederalist Warnings About Constitutional Taxing Power and The Power of Precedent: How a 1796 Supreme Court Decision Supported Obamacare) and his contention that Congress’ power to tax is defined within the Constitution itself, it is quite possible that the other enumerations he is referring to are the indirect and direct tax clauses found within the Constitution.

Therefore, the apportionment rule that is associated with the direct tax clauses could be the state taxation quotas that Madison mentioned in Federalist #45.

No capitation, or other direct, Tax shall be laid, unless in Proportion to the Census or enumeration herein before directed to be taken.

Representatives and direct taxes shall be apportioned among the several states which may be included within this union, according to their respective numbers.

However, if Madison thought these clauses had sufficient force to limit taxation, neither he nor the other Federalists ever clearly explained what these direct and indirect taxes were; or how they would be applied.

Therefore, the question remained: who would provide the authoritative interpretation of what these clauses actually mean? Would it be Supreme Court, Congress, the president, or the several states?

These questions were answered for the first time in Hylton v United States (1796).

This was the opening salvo in what would become a ceaseless war of federal economic subjugation of the people of the several states. And it proved the worst fears of the most alarmist Antifederalists were entirely justified. Not only did every warning they gave soon materialize, but it also continued to grow to a scope beyond anything they conceived.

The Antifederalists correctly predicted that such unlimited taxation would lead to the creation of the largest standing army the world has ever known. But could they have foreseen that this unlimited taxing power would be used in equal measure to tax away our natural right of self-defense and our last line of defense should that standing army ever turn inwards to be used against the people of the several states?

Perhaps the Federalists really believed their vague assurances that an unlimited federal taxing power could yield a limited application and reasonable exercise of that unlimited taxing power. But by 1819, in McCulloch v Maryland, Chief Justice (and notable Federalist) John Marshall embraced the axiom that “the unlimited power to tax is the power to destroy.”

Marshall was entirely correct in that regard and as members of Congress attempt to use the unlimited power to tax as the power to destroy the Second Amendment, we are witnessing the destructive legacy of the Federalists’ scheme of unlimited taxation.