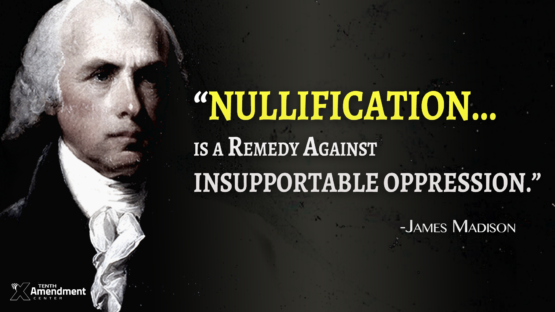 Nullification skeptics will often argue that the Kentucky Resolutions of 1798 weren’t actually proposing nullification. They base their argument on the fact that John Breckinridge removed specific references to nullification from Jefferson’s draft before he introduced it in the Kentucky House. But evidence from the debates in the House reveals that the resolutions were absolutely intended to set the stage for nullification and all of the representatives who voted to pass them knew it.

“Therefore this commonwealth is determined, as it doubts not its co-States are, to submit to undelegated, and consequently unlimited powers in no man, or body of men on earth: that in cases of an abuse of the delegated powers, the members of the general government, being chosen by the people, a change by the people would be the constitutional remedy; but, where powers are assumed which have not been delegated, a nullification of the act is the rightful remedy: that every State has a natural right in cases not within the compact, (casus non foederis]) to nullify of their own authority all assumptions of power by others within their limits: that without this right, they would be under the dominion, absolute and unlimited, of whosoever might exercise this right of judgment for them.” [Emphasis added]

Jefferson sent former Virginia ratifying convention delegate Wilson Cary Nicholas a draft of the resolution, likely hoping the state legislator could get them introduced in Virginia. In October 1798, Wilson indicated that state representative John Breckinridge was willing to introduce the resolutions in Kentucky. Breckinridge suffered from tuberculosis and made a recuperative trip to Sweet Springs, Va. late in August of that year. Nicholas likely gave the Kentucky lawmaker a copy of Jefferson’s draft during that trip.

On Nov. 8, 1798, Breckinridge introduced an amended version of Jefferson’s draft. Most notably, Breckinridge omitted the specific nullification language from the actual version considered by the Kentucky legislature, seeking to moderate the tone of the resolutions.

Those who deny the legitimacy of state nullification seize upon the omission of the nullification language as proof that Breckinridge didn’t actually believe the state had the power to nullify and was unwilling to present resolutions to that effect to the state legislature.

I have always contended that even without the specific language, the resolutions still laid the foundation for nullification. By declaring the Alien and Sedition Acts unconstitutional, and declaring that it “is not law, but is altogether void, and of no force,” Breckinridge presented the Kentucky legislature with a nullification resolution, even with the actual word omitted.

His motives for removing the direct reference to nullification were purely political. Anger over the Alien and Sedition Acts was so intense, there were some calls for violent action against the federal government. As a first step, Breckinridge wanted to walk a line between making a strong case for Kentucky’s right to act while maintaining a moderate tone.

But during a debate on the House floor recorded by the Frankfort Palladium, Breckinridge made it absolutely clear that the resolutions were supporting a case nullification and he specifically used the word.

Rep. William Murray was one of the few Federalist Party members in the Kentucky House. He made a speech in opposition to the resolutions on the House floor, arguing that it wasn’t the state legislature’s job to censure Congress and that it had no authority to declare a duly enacted law unconstitutional. Breckinridge forcefully responded in a speech of his own, saying, “The legislature is the constitutional and proper organ through which the will of the people is known, and when known, effectually executed on ordinary occasions.” He went on to ask a poignant question: “If Congress received no censure from the state legislature, from whom is the censure to come?”

In fact, when the people had protested the Alien and Sedition Acts in various county assemblies, Federalist Party supporters had accused them of raising “tumultuous mobs.”

Breckinridge went further, arguing that Congress was not “the lords and masters” of the states. He quipped, “The doctrine of passive obedience and non-resistance has grown rather unfashionable, and obsolete to be now revived.”

Breckinridge said his hope was that upon the representations of the state legislatures, Congress would “expunge the unconstitutional proceedings from the annals of the United States.” But he went on to say that if Congress attempted to enforce the Alien and Sedition Acts that it was “the right and the duty of the several states to nullify those acts and to protect their citizens from their operation.”

Breckinridge made this speech in front of the full House. This proves beyond a doubt that Breckinridge understood the resolutions to justify nullification. In fact, the intent of introducing them was to set the stage for further action if Congress failed to repeal the onerous laws. And everybody in the legislative body knew this because they heard Breckinridge’s defense of the resolutions.

The resolution passed the House on Nov. 10 with only three dissenting votes. The Senate unanimously concurred three days later, and Gov. James Garrard signed the resolutions on Nov. 16.

The day after Garrard signed the resolutions, Jefferson sent a draft to James Madison, writing, “I inclose you a copy of the draught of the Kentuckey resolves. I think we should distinctly affirm all the important principles they contain, so as to hold to that ground in future, and leave the matter in such a train as that we may not be committed absolutely to push the matter to extremities, & yet may be free to push as far as events will render prudent.” [Emphasis added]

Kentucky followed up with a second resolution affirming its position in 1799, notably including the word “nullification,” omitted in the final version of the Kentucky Resolutions of 1798 passed by the state legislature.

“The several states who formed that instrument (the Constitution), being sovereign and independent, have the unquestionable right to judge of its infraction; and, That a nullification, by those sovereignties, of all unauthorized acts done under color of that instrument, is the rightful remedy.”