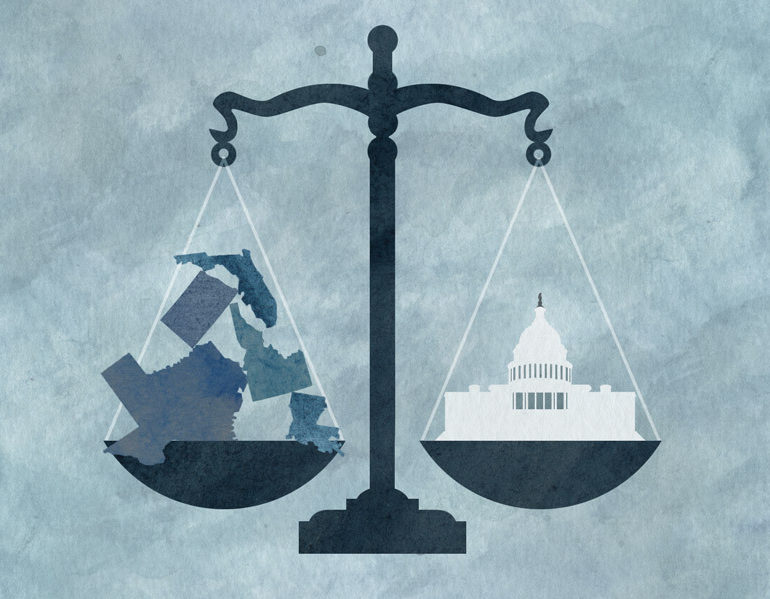 If you reflect back on how the institutions of governance grew in America, from 1620 to the present, you will see that National Government grew into its present level without much public support.  The settlements starting in New England, as well as Jamestown, were small and managed more from a town hall perspective than any formalized institution.  Every hamlet, town and county was an almost informal, non-national government. None of them existed as the means for special interests to capture the loyalty of some inhabitants, nor was there any treasury worth plundering.

They existed mainly for peacekeeping and settling civil disputes. Town and hamlets wrote their own laws or ordnances to establish behavioral boundaries acceptable to the majority of citizens.  On occasion, when special interests did gain excess power, or criminals were more powerful than the peacekeepers, vigilante groups formed by citizens corrected those conditions.  Each colony acted as its own governing institution as it related to currency, infrastructure and relations with colonies and nations outside of its boundaries.

In every colony, individual freedom, private property and free commerce existed, with the exception of slavery in some of the Southern colonies, introduced by the Crown in Jamestown.  The unification of the thirteen original colonies grew because of the actions of the British, in their moves to reinstate Crown powers where it had all but disappeared through neglect. A Colonial Congress established by representatives was to deal with common colonial causes. As tensions between colonists and King grew, unity increased, until open rebellion began and the Articles of Confederation were adopted.

The Articles provided the official naming of the Union of Colonies, now States, as the United States of America.  The Second Article, again reiterated in the 10th Amendment to America second constitution, said; Every state retains its sovereignty, freedom and independence, and every power, jurisdiction and right, which is not by this confederation expressly delegated to the United States, in Congress assembled.

Article III says these states enter into a firm league of friendship with each other, for their common defence, the security of their liberties, and their mutual and general welfare, binding them to assist each other, against all force offered, mentioning attacks by trade as well as war. From that point on, the Articles describe what a State may not do in direct dealings with other nations, except in unison as agreed in the Congress.  Appointments and committees, under the guidance of an annually elected President, would manage the National government formed by the Articles. This fit Jefferson idea of a political organization national in foreign affairs and non-national in domestic affairs.

Following the successful separation with Britain, and flush with a pride in flag and nation, many notable personages sought an organization both national in foreign affairs as well as national in domestic affairs.  The Federalists used their newly gained respect to call for a new constitution to create a central government, which, though not foreseen by many, would ultimately eclipse the role of state and local governments.

Men like Madison and Jefferson did see the possibilities of centralization of power, and moved quickly to get a commitment to a Bill of Rights appended to the Constitution at the sitting of the first congress.  If you want to know how rapidly power would have moved to the National Government, look at the Sedition Act, passed even before the ink had dried on the First Amendment guaranteeing free speech.  The Federalists ignored the Bill of Rights and the intent of the Constitution.  In 1800, they paid the price and lost their grip on government, appearing later as the new Democratic Party in Jackson time.

The Jefferson-Madison Republicans wanted nothing to do with a powerful central, national government, preferring states and counties as the primary seats of government. They knew that special interests and factions would swarm toward a distant government with a growing treasury.

Were they correct?  All you have to do is look closely at our National Government today, with special interests writing laws to suit their own needs, and hoards of citizens with their hands out, and votes promised, for special awards from the treasury. The Federal Government is now a fully corrupted government serving the interests of the few, paid for by the wealth of the many.

Traditional Republican voters, since the days of Barry Goldwater, have fought for the election of conservative candidates pledged to reverse the direction of the National Government.  Those elected in the 21st century have, for the most part, double-crossed their voting base and joined with the free-spending, high-taxing Democrats who serve the narrow special interests of treasury raiders. The year 2020 may be the conservative last chance to turn the tide.