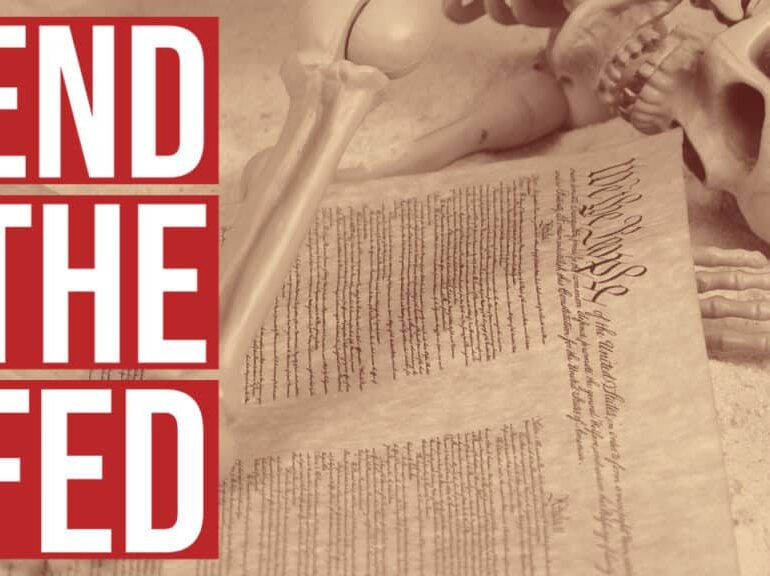 The Federal Reserve is the engine that drives the biggest, most powerful government in the history of the world.

We can trace the origins of the federal reserve back to the creation of the First Bank of the United States, even before ratification of the Bill of Rights.  Even then, it was built on dubious constitutional justifications, but it wasn’t created without a fight. The arguments advanced by the bank’s opponents provide a great deal of insight into the original understanding of the Constitution and the American system as it was conceived.

This is an important subject to explore because central banking has both constitutional and policy ramifications.

Monetary policy run through the Fed enables much of the U.S. government’s excessive borrowing and spending. If the federal government had to rely on tax receipts and borrowing that it could actually repay to fund all of its unconstitutional wars, foreign aid and domestic spending, it would be dead in the water. The ability to raise revenue through taxation and free-market borrowing would naturally limit the government. But with the Fed backstopping the borrowing by monetizing the debt, there are virtually no limits on its spending.

Given the enormous role the Fed plays in the American system of government, you would expect to find it explicitly authorized by the Constitution.

So how did we get to this point?

While the Federal Reserve wasn’t created until 1913, its foundation was laid far earlier – in the earliest days of the republic.

Congress chartered the First Bank of the United States on Feb. 25, 1791.

A national bank was the brainchild of Alexander Hamilton. His rationale wasn’t much different from those who later came up with the Federal Reserve. Hamilton thought a central bank was necessary to stabilize and improve the fledgling nation’s credit and to better manage the financial business of the United States government. He also knew that his vision of a powerful national government was impossible without a central bank to backstop government borrowing.

But what about the Constitution? How did Hamilton’s bank fit into the constitutional framework ratified just a couple of years earlier?

In order to justify his bank, Hamilton performed perhaps the greatest political flip-flop in American history. During the ratification debates, Hamilton promised that the federal government would remain limited to its explicitly delegated powers. But when it came time to charter his bank, Hamilton suddenly discovered “implied powers” buried in the text of the Constitution.

If supporters had taken this position during the ratification process, the states would have rejected the Constitution outright.

Hamilton’s bank plan sparked intense debate. It wasn’t merely an argument about the need for a bank or the functions it should perform. The opposition to the national bank led by Thomas Jefferson and James Madison was far more fundamental and based on constitutional grounds.

The arguments against the bank fit more closely with the vision laid out by supporters of the Constitution during the ratification debates, but ultimately, Hamilton won the day. The chartering of the First Bank of the United States not only set the precedent for government-controlled central banking that ultimately gave us the Federal Reserve; it also sent the United States down the path to ever-growing central power.

As Jefferson put it, “To take a single step beyond the boundaries thus specially drawn around the powers of Congress, is to take possession of a boundless field of power, no longer susceptible of any definition.”

Hamilton’s arguments for the bank became the basis for loose constitutional construction that flipped the structure of the U.S. government on its head. Instead of a federal government exercising powers “few and defined,” Hamiltonian constitutionalism gave us a central government with powers “numerous and indefinite”

My new ebook, The National Bank vs. the Constitution digs deep into the arguments presented by Hamilton and the constitutional counterarguments offered by Madison, Jefferson and other opponents of the bank, such as Edmund Randolph. It also offers a concise overview of the history of the Federal Reserve and the role of central banking in the United States.

The story is about more than central banking. It’s really a battle for the heart and soul of America’s constitutional system.