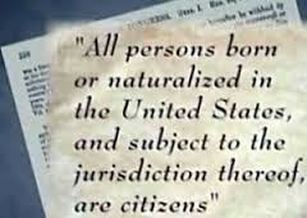 Birthright Citizenship—the policy whereby the children of illegal aliens born within the geographical limits of the United States are entitled to American citizenship—is a great magnet for illegal immigration. Many believe that this policy is an explicit command of the Constitution, consistent with the British common law system. But this is simply not true.

The framers of the Constitution were, of course, well-versed in the British common law, having learned its essential principles from William Blackstone’s Commentaries on the Laws of England. As such, they knew that the very concept of citizenship was unknown in British common law. Blackstone speaks only of “birthright subjectship” or “birthright allegiance,” never using the terms citizen or citizenship. The idea of birthright subjectship is derived from feudal law. It is the relation of master and servant; all who are born within the protection of the king owe perpetual allegiance as a “debt of gratitude.” According to Blackstone, this debt is “intrinsic” and “cannot be forefeited, cancelled, or altered.” Birthright subjectship under the common law is thus the doctrine of perpetual allegiance.

America’s Founders rejected this doctrine. The Declaration of Independence, after all, solemnly proclaims that “the good People of these Colonies. . . are Absolved from all Allegiance to the British Crown, and that all political connection between them and the State of Great Britain, is and ought to be totally dissolved.” According to Blackstone, the common law regards such an act as “high treason.” So the common law—the feudal doctrine of perpetual allegiance—could not possibly serve as the ground of American (i.e., republican) citizenship. Indeed, the idea is too preposterous to entertain!

Who is a Citizen?

Although the Constitution of 1787 mentioned citizens, it did not define citizenship. It was in 1868 that a definition of citizenship entered the Constitution, with the ratification of the Fourteenth Amendment. Here is the familiar language: “All persons born or naturalized in the United States, and subject to the jurisdiction thereof, are citizens of the United States and of the State wherein they reside.” Thus there are two components to American citizenship: birth or naturalization in the U.S. and being subject to the jurisdiction of the U.S. We have somehow come today to believe that anyone born within the geographical limits of the U.S. is automatically subject to its jurisdiction. But this renders the jurisdiction clause utterly superfluous and without force. If this had been the intention of the framers of the Fourteenth Amendment, presumably they would simply have said that all persons born or naturalized in the United States are thereby citizens.

Indeed, during debate over the amendment, Senator Jacob Howard of Ohio, the author of the citizenship clause, attempted to assure skeptical colleagues that the new language was not intended to make Indians citizens of the U.S. Indians, Howard conceded, were born within the nation’s geographical limits; but he steadfastly maintained that they were not subject to its jurisdiction because they owed allegiance to their tribes. Senator Lyman Trumbull, chairman of the Senate Judiciary Committee, rose to support his colleague, arguing that “subject to the jurisdiction thereof” meant “not owing allegiance to anybody else and being subject to the complete jurisdiction of the United States.” Jurisdiction understood as allegiance, Senator Howard interjected, excludes not only Indians but “persons born in the United States who are foreigners, aliens, [or] who belong to the families of ambassadors or foreign ministers.” Thus “subject to the jurisdiction” does not simply mean, as is commonly thought today, subject to American laws or American courts. It means owing exclusive political allegiance to the U.S.

Consider as well that in 1868, the year the Fourteenth Amendment was ratified, Congress passed the Expatriation Act. This act permitted American citizens to renounce their allegiance and alienate their citizenship. This piece of legislation was supported by Senator Howard and other leading architects of the Fourteenth Amendment, and characterized the right of expatriation as “a natural and inherent right of all people, indispensable to the enjoyment of the rights of life, liberty, and the pursuit of happiness.” Like the idea of citizenship, this right of expatriation is wholly incompatible with the common law understanding of perpetual allegiance and subjectship. One member of the House expressed the general sense of the Congress when he proclaimed: “The old feudal doctrine stated by Blackstone and adopted as part of the common law of England . . . is not only at war with the theory of our institutions, but is equally at war with every principle of justice and of sound public policy.” The common law established what was characterized as an “indefensible doctrine of indefeasible allegiance,” a feudal doctrine wholly at odds with republican government.

In sum, this legacy of feudalism—which we today call birthright citizenship—was decisively rejected as the ground of American citizenship by the Fourteenth Amendment and the Expatriation Act of 1868. It is absurd, then, to believe that the Fourteenth Amendment confers the boon of American citizenship on the children of illegal aliens. Nor does the denial of birthright citizenship visit the sins of the parents on the children, as is often claimed, since the children of illegal aliens born in the U.S. are not being denied anything to which they have a right. Their allegiance should follow that of their parents during their minority. Furthermore, it is difficult to fathom how those who defy American law can derive benefits for their children by their defiance—or that any sovereign nation would allow such a thing.

There is no Supreme Court decision squarely holding that children of illegal aliens are automatically citizens of the U.S. An 1898 decision, U.S. v. Wong Kim Ark, held by a vote of 5-4 that a child of legal resident aliens is entitled to birthright citizenship. TheWong Kim Ark decision, however, was based on the mistaken premise that the Fourteenth Amendment adopted the common law system of birthright citizenship. The majority opinion did not explain how subjects were miraculously transformed intocitizens within the common law. Justice Gray, writing the majority decision, merely stipulated that “citizen” and “subject” were convertible terms—as if there were no difference between feudal monarchy and republicanism. Indeed, Chief Justice Fuller wrote a powerful dissent in the case arguing that the idea of birthright subjectship had been repealed by the American Revolution and the principles of the Declaration.

The constitutional grounds for the majority opinion in Wong Kim Ark are tendentious and it could easily be overturned. This would, of course, require a proper understanding of the foundations of American citizenship, and whether the current Supreme Court is capable of such is open to conjecture. But in any case, to say that children of legal aliens are entitled to citizenship is one thing; after all, their parents are in the country with the permission of the U.S. It is entirely different with illegalaliens, who are here without permission. Thus repeal of the current policy of birthright citizenship for the children of illegal aliens would not require a constitutional amendment.

We have seen that the framers of the Fourteenth Amendment unanimously agreed that Indians were not “subject to the jurisdiction” of the U.S. Beginning in 1870, however, Congress began to pass legislation offering citizenship to Indians on a tribe by tribe basis. Finally, in 1923, there was a universal offer to all tribes. Any Indian who consented could become an American citizen. This citizenship was based on reciprocal consent: an offer on the part of the U.S. and acceptance on the part of an individual. Thus Congress used its legislative powers under the Fourteenth Amendment to determine who was within the jurisdiction of the U.S. It could make a similar determination today, based on this legislative precedent, that children born in the U.S. to illegal aliens are not subject to American jurisdiction. A constitutional amendment is no more required now than it was in 1923.

The same kind of confusion that has led us to accept birthright citizenship for the children of illegal aliens has led us to tolerate dual citizenship. We recall that the framers of the Fourteenth Amendment specified that those who are naturalized must owe exclusive allegiance to the U.S. to be included within its jurisdiction. And the citizenship oath taken today still requires a pledge of such allegiance. But in practice dual citizenship—and dual allegiance—is allowed. This is a sign of the decline of American citizenship and of America as a nation-state.

It is remarkable that 85 percent of all immigrants arriving in the U.S. come from countries that allow—and encourage—dual citizenship. Dual citizens, of course, give the sending countries a unique political presence in the U.S., and many countries use their dual citizens to promote their own interests by exerting pressure on American policy makers. Such foreign meddling in our internal political affairs has in fact become quite routine. Thus we have created a situation where a newly naturalized citizen can swear exclusive allegiance to the U.S. while retaining allegiance to a vicious despotism or a theocratic tyranny.

Elite liberal opinion has for many years considered the sovereign nation-state as an historical anachronism in an increasingly globalized world. We are assured that human dignity adheres to the individual and does not require the mediation of the nation-state. In this new universe of international norms, demands on the part of the nation-state to exclusive allegiance or for assimilation violate “universal personhood.” In such a universe, citizenship will become superfluous or even dangerous.

Those who advocate open borders tend to share this cosmopolitan view of transnational citizenship. Illegal immigrants, they say, are merely seeking to support their families and improve their lives. Borders, according to them, should not stand in the way of “family values”—those universal “values” that refuse to recognize the importance or relevance of mere political boundaries. Somehow, for those who hold these views, political exclusivity and the requirement of exclusive allegiance are opposed to these universal “values” if not to human decency itself.

Mexican President Felipe Calderon was in California recently pushing for more liberal immigration policies. He assured his fellow citizens who reside in the U.S. that he is “actively working to defend their human rights.” “No matter their immigration status,” Calderon said, “they are human beings with dignity and rights that should be respected. We are working, with the full effort of the [Mexican] government, to bring a halt to the campaigns that harass migrants.” However much Calderon may be worried about the human rights of his fellow citizens, he is fully cognizant of the fact that Mexico’s economy depends on the remittances of its citizens working abroad. These remittances have become Mexico’s second largest source of revenue, trailing only its rapidly declining oil revenues. It is far easier—and politically safer—for Mexico to export its poverty than to reform its own political and economic system.

We must constantly remind ourselves, however, of the historical fact that constitutional democracy has existed only in the nation-state, and that the demise of the nation-state will almost certainly mean the demise of constitutional democracy. No one believes that the European Union or similar organizations will ever produce constitutional government. Indeed, the EU is well on its way to becoming an administrative tyranny. Nor would the homogeneous world-state—the EU on a global scale—be a constitutional democracy; it would be the administration of “universal personhood” without the inconvenience of having to rely on the consent of the governed. The doctrine of birthright citizenship and the acceptance of dual citizenship are signs that we in the U.S. are on the verge of reinstituting feudalism and replacing citizenship with the master-servant relationship. The continued vitality of the nation-state and of constitutional government depends on the continued vitality of citizenship, which carries with it exclusive allegiance to what the Declaration calls a “separate and equal” nation. Unless we recover an understanding of the foundations of citizenship, we will find ourselves in a world where there are subjects but no citizens.