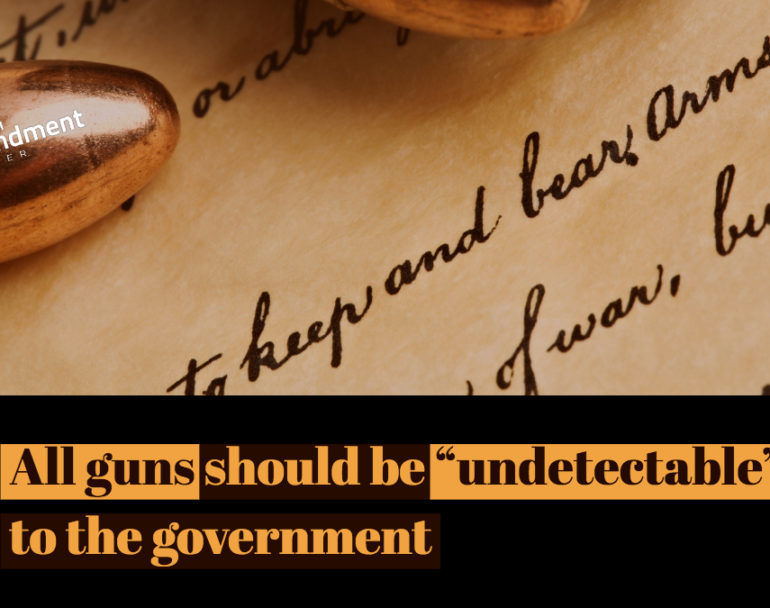 The Second Amendment’s text isn’t hard to read, and it takes all sorts of legal somersaults to get around the “shall not be infringed” part. So, it is confusing and ironic when a national gun rights lobby like the National Rifle Association (NRA) comes out in favor of unconstitutional federal gun control — again.

This time, it concerns plastic guns created using 3D printers. These homemade firearms have the potential to completely undermine the whole concept of “gun control.” Naturally, there have been efforts to suppress access to the blueprints for these guns by making it illegal to upload them onto the internet.

In a carefully-worded statement, NRA Institute for Legislative Action Executive Director Chris W. Cox wrote that “regardless of what a person may be able to publish on the Internet, undetectable plastic guns have been illegal for 30 years. A federal law passed in 1988, crafted with the NRA’s support, makes it unlawful to manufacture, import, sell, ship, deliver, possess, transfer, or receive an undetectable firearm.”

It’s curious that the NRA would say this. Federal law doesn’t trump the Second Amendment. The right to keep and bear arms shall not be infringed. All federal gun control laws are unconstitutional, including laws the NRA has supported in the past. Anyone who can print “undetectable” guns has the right to do so. Even if the Second Amendment didn’t exist, Congress would still require the explicit authority to regulate uploading blueprints for a gun onto the World Wide Web – which of course it does not. (No. Giving away free blueprints is not “commerce.”)

Interestingly, the notion that “undetectable” weapons should be banned or restricted led to shooting between Redcoats and Minutemen at Lexington and Concord. Local militia had amassed arms and munitions, and the British knew these arms could pose a threat if fighting broke out. To remove that possibility and solidify British dominance over the colonists of Massachusetts, General Gage sent a detachment to retrieve or destroy those stores of munitions and weapons.

Gun grabbers want to restrict “undetectable” weapons that make it impossible to track who owns what for the same reasons.

Not only are there no serial numbers on these guns, but they are created rather than purchased. A critical piece of the gun control agenda is to control firearms by adding onerous restrictions and requirements during the purchasing process that either discourage the sale of firearms, or that open the door to control those who do acquire them.

The great irony is that the NRA often serves as the boogeyman for the gun control lobby. Gun control advocates paint the organization as some kind of rabid, fringe entity, composed of uncompromising extremists. Such rhetoric likely helps them fundraise, but it bears little semblance to reality. The actual record shows that the NRA has repeatedly supported federal gun control legislation going as far back as the 1930s. And it prefers to keep its “solutions” confined to federal legislation, rather than undermining future gun control through state-level anti-commandeering laws.

If we adopted the attitude of the Founders, all guns would be “undetectable.” That is a stance all “gun rights” groups should endorse.