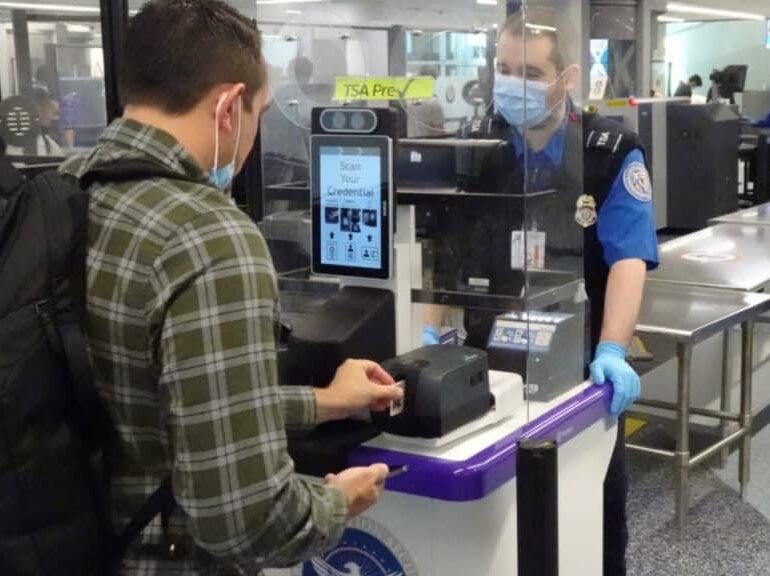 Called the next generation of Credential Authentication Technology (CAT), the system uses a camera to capture a photo of the passenger’s face. The photo is then compared to the passenger’s government-issued ID.

According to the TSA, the photo “will not be stored or used for any other purpose than identity verification in the security checkpoint.”

But it certainly could be.

The TSA plans to use the system for about 90 days and LAX and 12 other airports in order to gather data and determine if it will expand the system nationwide.

The system is sold on its convenience. One passenger told ABC 7, “I’ve never walked right through like this.” Some people also like the fact that they don’t have to have any physical contact with the TSA agent checking IDs. “I feel like it’s a lot safer that way because we don’t have to touch anything with our hands,” said Karen Marquez, another LAX passenger. (It’s highly likely she was groped during the screening process, but that’s another issue.)

A 2019 report revealed that the federal government has turned state drivers’ license photos into a giant facial recognition database, putting virtually every driver in America in a perpetual electronic police lineup. The revelations generated widespread outrage, but the story wasn’t new. The federal government has been developing a massive facial recognition system for years.

The FBI rolled out a nationwide facial recognition program in the fall of 2014, with the goal of building a giant biometric database with pictures provided by the states and corporate friends.

In 2016, the Center on Privacy and Technology at Georgetown Law released “The Perpetual Lineup,” a massive report on law enforcement use of facial recognition technology in the U.S. You can read the complete report at perpetuallineup.org. The organization conducted a year-long investigation and collected more than 15,000 pages of documents through more than 100 public records requests. The report paints a disturbing picture of intense cooperation between the federal government, and state and local law enforcement to develop a massive facial recognition database.

Despite the outrage generated by these reports, Congress has done nothing to roll back this facial recognition program.

There are many technical and legal problems with facial recognition, including significant concerns about the accuracy of the technology, particularly when reading the facial features of minority populations. During a test run by the ACLU of Northern California, facial recognition misidentified 26 members of the California legislature as people in a database of arrest photos.

With facial recognition technology, police and other government officials have the capability to track individuals in real-time. These systems allow law enforcement agents to use video cameras and continually scan everybody who walks by. According to the report, several major police departments have expressed an interest in this type of real-time tracking. Documents revealed agencies in at least five major cities, including Los Angeles, either claimed to run real-time face recognition off of street cameras, bought technology with the capability, or expressed written interest in buying it.

Reports that the Berkeley Police Department in cooperation with a federal fusion center deployed cameras equipped to surveil a “free speech” rally and Antifa counterprotests provided the first solid link between the federal government and local authorities in facial recognition surveillance.

It’s only a matter of time before this seemingly “harmless” TSA facial recognition system is integrated into the broader federal surveillance network – if it hasn’t been already.