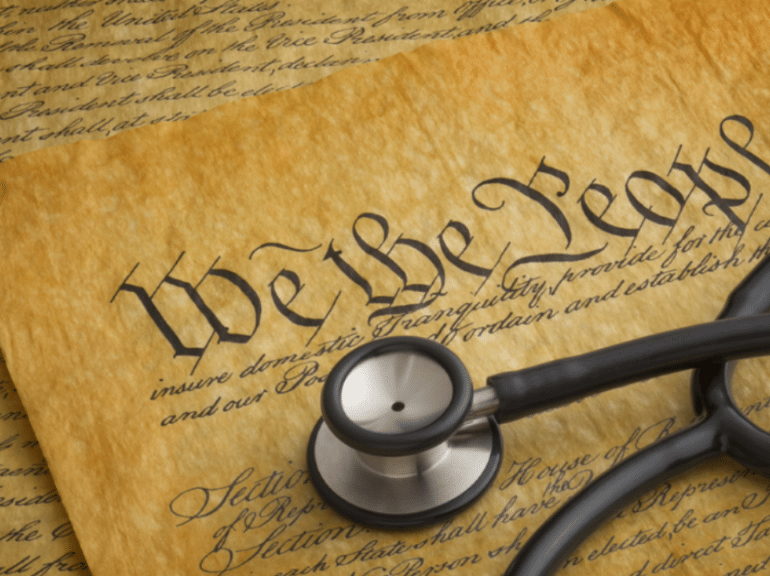 One of the most striking and unique and hotly debated aspects of the American system of government is judicial review. Where precisely does this doctrine arise from?

The Judicial power shall extend to all cases in Law and Equity, arising under this Constitution.

However, if you aren’t already familiar with the interpretation of that clause, it’s not immediately apparent judicial review is a doctrine that can be logically derived from that bit of text.

So, who first looked at that clause and deduced this clause gave the judiciary the power to invalidate laws?

There are two answers you will get depending on what people think you mean, whether you are talking about its expression in fact or in theory.

If they think you mean “expression in fact,” they will say, “It comes from Marbury vs Madison, when John Marshall used judicial review to invalidate aspects of the Judiciary Act of 1789.”

If the person infers one means the first time this was clearly expressed in theory, their likely answer would be Alexander Hamilton’s discussion of Judicial Review in Federalist #78.

The problem is both of those answers are wrong.

Marbury was not even close to the first time Judicial Review was used to invalidate a law. And Federalist #78 was part of a public debate played out in newspapers between two founders writing under the pen names Brutus & Publius.

Most people familiar with Federalist #78 don’t realize that the entire letter is specifically written as a point-by-point counterargument responding to Brutus’ 8th and 11th essays, and that Brutus’ 8th through 15th essays and Federalist 78-81 make up a back-and-forth dialogue.

When they are read in that proper context, so much of what you likely think Federalist #78 meant changes drastically. I would go as far as to say that you can’t truly understand Federalist #78 unless you are aware of and familiar with the essays by Brutus that precede Hamilton’s essay.

With that in mind, we are going to examine the essays by Brutus and replies by Publius. This makes up the original “first word” on the meaning and scope of Judicial Review under Article III, Section 2, Clause 1. This is an important part of the great debate over the Constitution during that crucial period of ratification between September of 1787 to August 1788 – as discussed by both advocates and opponents.

It is noteworthy that whenever Marbury v. Madison is discussed in works on constitutional jurisprudence and American history, reference is invariably made to Alexander Hamilton’s discussion of judicial review in Federalist # 78 as an early indication that the principle was regarded as a fundamental part of the system of government set up under the Constitution. Surprisingly, these works, almost without exception, fail to refer to the Antifederalist Letters of Brutus to which this number of the Federalist Papers constitutes a response. This is a regrettable omission since it excludes half of the relevant information for a comprehensive understanding of these issues. Moreover, Brutus’ views on judicial supremacy constitute a novel thesis that, to date, has not been sufficiently appreciated in the literature.

Hamilton’s counterargument (mainly in Federalist # 78 and #81), viewed in the light of Brutus’ thesis, is seen to obfuscate the issue of judicial supremacy and, in effect, leaves Brutus’ thesis unimpaired.

Perhaps the first thing to note is that Brutus did not question the right of the courts to exercise judicial review.

In acknowledging that judicial review was within the province of the court, Brutus went on to outline the corollary:

“[T]he judgment of the judicial, on the constitution, will become the rule to guide the legislature in their construction of their powers [since] the legislature … will not go over the limits by which the courts may adjudge they are confined. “(Brutus 9)

What concerned Brutus, in the first instance, was the use to which the court would apply judicial review in the service of national consolidation and how this would threaten the independence and survival of the states. The judicial power, Brutus warned, would operate to affirm and legitimate all the invasions of state power committed by the national legislature. “The real effect of this system of government, will … be brought home to the feelings of the people, through the medium of the judicial power.” Therefore, he said: [It was] of great importance, to examine with care the nature and extent of the judicial power, because those who are to be vested with it, are to be placed in a situation altogether unprecedented in a free country. They are to be rendered totally independent, both of the people and the legislature… (Brutus 11)

“…Every extension of the power of the general legislature, as well as of the judicial powers, will increase the powers of the courts; and the dignity and importance of the judges, will be in proportion to the extent and magnitude of the powers they exercise. [Thus] the judicial power will operate to effect, in the most certain, but yet silent and imperceptible, manner what is evidently the tendency of the constitution:–I mean, an entire subversion of the legislative, executive and judicial powers of the individual states.” (Brutus 11)

“The opinions of the Supreme Court, whatever they may be, will have the force of law; because there is no power provided in the constitution, which can correct their errors, or control their adjudications. From this court there is no appeal. (Brutus 11)

It was important, in Brutus’ view, to appreciate that the court would be free to interpret the constitution:

“Not only according to its letter, but according to its spirit and intention; and having this power, they would strongly incline to give it such a construction as to extend the powers of the general government, as much as possible, to the diminution, and finally to the destruction, of that of the respective states.” (Brutus 11)

The “spirit” of the constitution, Brutus claimed, can best be deduced from the preamble to the Constitution, which included the comprehensive term “to provide for the general welfare.” ”

“[I]f the spirit of this system is to be known from its declared end and design in the preamble, its spirit is to subvert and abolish all the powers of the state government, and to embrace every object to which any government extends.”

This conclusion is confirmed by the powers enumerated in Article 1, Section 8, which “extend to almost everything about which any legislative power can be employed.” And if so, Brutus contended, “nothing can stand before it” (i.e., the national legislature). This was particularly so in view of the expansive nature of the necessary and proper clause which would “undoubtedly be an excellent auxiliary to assist the courts to discover the spirit and reason of the constitution.” As a result, the powers of the government would extend “to every case, and reduce the state legislatures to nothing.”  This conclusion emerged from the following analysis:

“[T]hese courts will have authority to decide upon the validity of the laws of any of the states, in all cases where they come in question before them. Where the constitution gives the general government exclusive jurisdiction, they will adjudge all laws made by the states, in such cases, void ab initio. Where the constitution gives them concurrent jurisdiction, the laws of the United States must prevail, because they are the supreme law. In such cases, therefore, the laws of the state legislatures must be repealed, restricted, or so construed, as to give full effect to the laws of the union on the same subject…. [I]n proportion as the general government acquires power and jurisdiction, by the liberal construction which the judges may give the constitution, will those of the states lose its rights, until they become so trifling and unimportant, as not to be worth having.” (Brutus 8)”