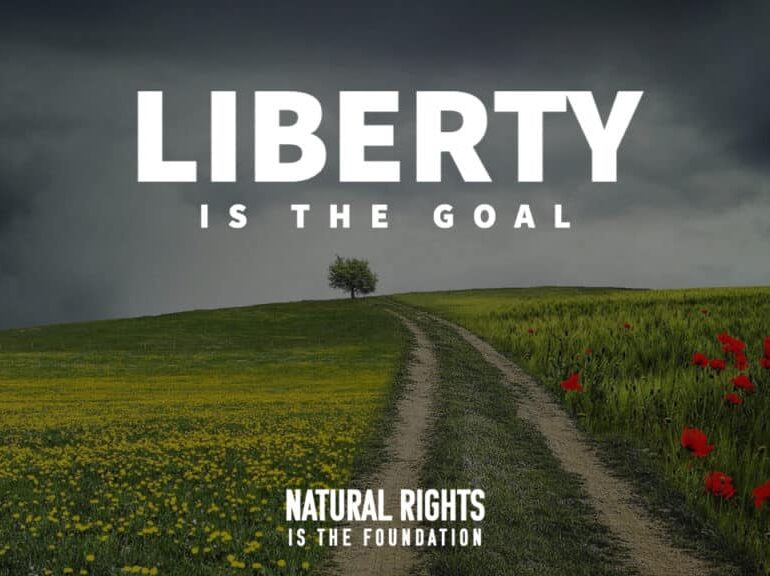 With the TAC’s 15 year anniversary coming this week, I thought it was a good time to share with you our driving principle –Natural Rights and Liberty, the foundation for all our work, along with the long-term goal of what we hope to achieve.

For those who prefer to keep things short, I can sum it up in just four words:

But since you’re here, I figure you enjoy reading our articles and want to learn more. So we really should start out by going back to the early years of “the Controversy between Great Britain and America,” to see how the founders and old revolutionaries looked at things through a natural rights perspective.

“The Colonists are by the law of nature free born, as indeed all men are, white or black.”

John Dickinson, in the last of his twelve Letters from a Farmer in Pennsylvania of 1767, expanded on this natural rights foundation:

Those letters were the most widely read documents on American liberty up until the publication of Thomas Paine’s Common Sense in Jan. 1776 and brought him the name “Penman of the Revolution.”

Approved by Committee of Correspondence to the Boston Town Meeting (Nov. 20, 1772) “The Rights of the Colonists,” authored by Samuel Adams took things to the next level with this:

Among the natural rights of the Colonists are these: First, a right to life; Secondly, to liberty; Thirdly, to property; together with the right to support and defend them in the best manner they can. These are evident branches of, rather than deductions from, the duty of self-preservation, commonly called the first law of nature.

Life. Liberty. Property. And the right to support and defend.

These are natural rights. And they are derived from the “first law of nature,” as Adams described it.

Mostly ignored in government schools, the impact of this document was noted in The Life of Samuel Adams, “Upon this paper was based all that was written or spoken on human liberty in the Congress which declared independence.”

We can certainly see the influence it had on the Declaration here:

“We hold these truths to be self-evident, that all men are created equal, that they are endowed by their Creator with certain unalienable rights, that among these are life, liberty and the pursuit of happiness.”

While it wasn’t as prevalent as in the years leading up to the Revolution, we certainly did see a lot of talk about natural rights, sovereignty, and liberty in the debates over the Constitution for the United States.

Luther Martin of Maryland, for example, noted in the Philadelphia Convention that “The first principle of government is founded on the natural right of individuals, and in perfect equality.” (27 June 1787)

James Wilson eloquently stated the American understanding of “sovereignty,” or final authority – which had always been held by a single person, like a king or a queen, but was recognized by the old revolutionaries as flowing from the People.

In all our associations; in all our agreements let us never lose sight of this fundamental maxim – that all power was originally lodged in, and consequently is derived from, the people. We should wear it as a breastplate, and buckle it on as our armour. [emphasis added]

While the founding generation recognized these important principles, we have to acknowledge that the monster state has its own foundation – fear. And it drives people to run to its arms for protection.

John Adams pointed this out in Thoughts on Government (April 1776):

“FEAR is the foundation of most governments”

I’d just remove the word “most.”

He also rightly pointed out that fear drives people to be “so stupid, and miserable,” which is something we can see all around us today. But, he didn’t think the people of his generation would fall for it.

Patrick Henry saw things differently in one of his great speeches in the Virginia Ratifying Convention of June 1788, already noting a shift away from the language of liberty to something else:

When the American spirit was in its youth, the language of America was different: liberty, sir, was then the primary object. [emphasis added]

Otis, Dickinson, Adams – and so many others – an entire generation rallied around the cause of natural rights and liberty.

For 15 years, we’ve been working to revive this essential natural rights foundation, with liberty as our “primary object” – in both the short and long term.

In his oration of March 5, 1772 commemorating the Boston Massacre, the great Revolutionary War Hero Joseph Warren may have summed it up best:

“May our land be a land of liberty, the seat of virtue, the asylum of the oppressed, a name and a praise in the whole earth, until the last shock of time shall bury the empires of the world in one common undistinguished ruin!”

Help us kick off the next 15 years by becoming a member today: JOIN TAC, Support Liberty!