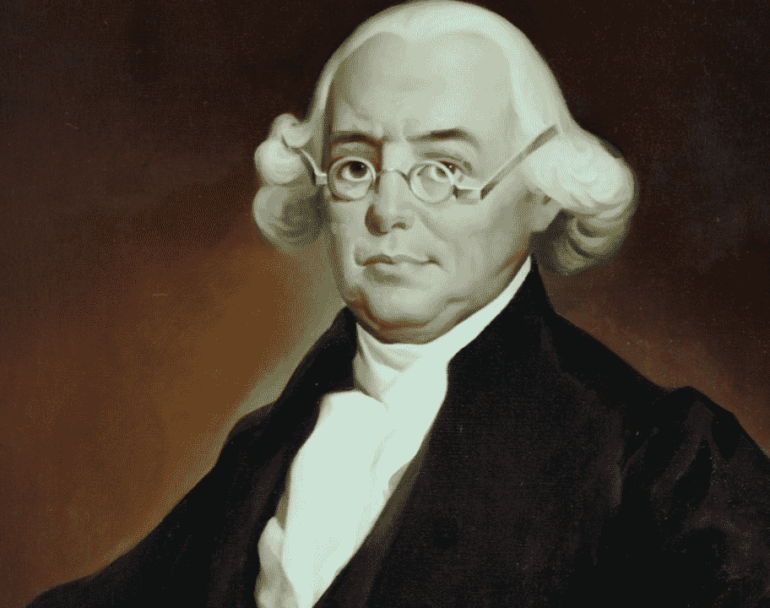 James Wilson of Pennsylvania (1742-98) was one of the most influential of the Constitution’s framers. Some scholars rank him as second only to James Madison.  Wilson was a distinguished lawyer who eventually served on the U.S. Supreme Court.

But a fuller understanding of the historical record shows that while Wilson flirted with the idea of direct election, he never strongly advocated it. In the end he firmly supported the Constitution’s plan for indirect election through the Electoral College.

Here is the story:

Soon after the Constitutional Convention met in May, 1787, it became obvious that choosing a presidential election procedure would be a tough job.  Wilson later called it “the most difficult of all on which we have had to decide.”

So Wilson rejected a proposal to have Congress choose the president. He also rejected a proposal for state governors to make the choice. But Wilson was uncertain what the alternative should be. Later in the convention he confessed that “He had never made up an opinion on it entirely to his own satisfaction.”

That uncertainty was clear when, on June 1 Wilson ventured that “At least . . . in theory he was for an election by the people.” After Wilson sat down, George Mason of Virginia responded that direct election was impractical, but he invited Wilson to encapsulate his ideas in a specific proposal.

Wilson offered his proposal the following day. It did NOT call for direct election. It called for the voters in fixed districts to choose electors, who then would choose the president.

Was Wilson being inconsistent? Why would he advocate “election by the people” but propose indirect election instead?

No, he was not being inconsistent. Wilson considered both direct and indirect election as forms of “election by the people.” As he phrased it in remarks on July 19, “he perceived with pleasure that the idea was gaining ground, of an election mediately [indirectly] or immediately [directly] by the people.”

Many writers have missed this point because they don’t know the significance of Wilson’s background. He was born, raised, and educated in Scotland. In England qualified voters chose members of the British House of Commons directly. But Scotland employed a system of indirect election: voters and popularly-elected local councils chose electors (called “commissioners”) who in turn designated their representatives in Parliament. To the Scottish way of thinking, this was a form of “election by the people.”

At the time, Maryland also was using an indirect election procedure for choosing state senators. Many of the convention delegates admired the Maryland system.

This was clearly not direct election, but on September 4 Wilson delivered a speech to the convention supporting it. However, he suggested that runoffs be transferred away from the Senate (which he considered too aristocratic) to Congress as a whole. The convention partly agreed: It moved the runoff election to the House of Representatives.

After the convention adjourned on September 17, 1787 Wilson continued to praise the Constitution’s presidential election system. At the Pennsylvania ratifying convention late in the year, he said the president “will be chosen in such a manner that he may be justly styled the man of the people.” Although he acknowledged that direct election might be a good method also, it was only his second favorite: “next after the one prescribed in this Constitution.”

He also acknowledged that “it was the opinion of a great majority in Convention, that [direct election] was impracticable,” and that “The choice of [the president] is brought as nearly home to the people as is practicable. With the approbation of the state legislatures, the people may elect with only one remove”—in other words, with state legislative approval (now granted in every state) the people themselves may select those who elect the president.

Wilson’s views were unchanged four years later, when he praised the Constitution’s presidential election system lavishly in his famous Lectures on Law.

Thus, the historical record shows that those who claim Wilson supported “national popular vote” are mistaken. Although Wilson toyed with the idea of direct election, when all was said and done he preferred the presidential system featured in our Constitution.