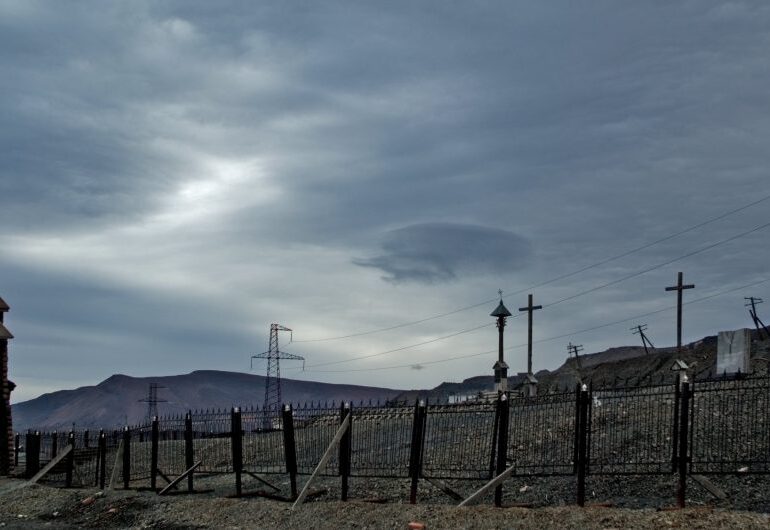 There are no gulags in America. But that doesn’t mean there is no tyranny. Gulags are so sloppy and inefficient, anyway. America’s coming tyranny presents a different menace. This tyranny, long ago glimpsed by Alexis de Tocqueville, ignores the body and goes right for the soul. Its victims will not be deprived of their goods or lives for contradicting our official party line (not yet!). People may still keep their jobs or find new ones.

The crimes under this new tyranny are perceived speech-crimes or thought-crimes. Those who commit such crimes will be isolated. They will become strangers in the land or exiles. When exiles approach, former friends will flee as from someone impure. Many may believe that these exiles are innocent or may wish to extend them forgiveness. A former friend may whisper encouragement, privately, but even he shall abandon the impure to their fate for fear that something like this may happen to him. Whose heart does not ache for these injustices? Whose conscience is so seared as to think such un-personings are causes for celebration?

Yet, in a larger sense, this is only half our reason for chagrin.

In the style and language of Aleksandr Solzhenitsyn, then, it is worth considering the attributes of America’s new, “muzzled freedom.”*

The uncancelled remain free, but their freedom is not what it used to be. The free have something to lose, after all. They could lose their jobs, their good name, the honor that comes from inventing, and the ability to educate others or to influence institutions. They could bring shame or ignominy on their children, or have a difficult time providing for the lifestyle that families have grown accustomed to. So are the free really free?

A careless word (no matter how long ago it was uttered) or gesture or even a studied silence can lead a former person to be thrown into the void. Nearly every American stands on a trap door above this void. If you love the fruits of your freedom, it is best to avoid opening that trap door and losing all that you have held dear.

Can you sympathize with Chris Cuomo, for example? Every night he goes on the air knowing that he must make his guests conform to the line—and that means asking the “right questions.” When white suburbanites defend their property from an angry mob, he asks “to be fair, the mob never actually attacked you or your home, right? Wasn’t the mob just looking for the mayor’s house?” If he displays an insufficiently fanatical zeal for the “woke” cause, he could lose his platform. Others like James Bennet (who merely published an article for “the other side”) or Tom McGrath (who did plenty but not “enough” to help minorities) have, after all, been un-personed for less. Should Cuomo report on the slaughter of innocent black children on the crime-ridden streets of America’s largest cities? Should he notice or even mention that fellow travelers have been forced out at the New York Times or resigned from the paper?  Probity isn’t everything, after all. He owes the cause something, nearly everything in fact. Cuomo’s mendacity appears almost forgivable once you understand it. The man does not look comfortable in his chair. Does anyone?

Ideological lies sustain this new tyranny. All must train their minds to a false image of themselves. Everyone must applaud and salute.

How many craven college administrators fear the woke students that they have helped to create?

What kind of a reporter stands in front of a burning building and says that these protests are “mostly peaceful”? Is he insensible to the world or afraid of contradicting a narrative?

How many journalists or academics or actors or producers have ever used an off-color word? Or worn an “insensitive” costume?  Or cited a non-approved line of argument?  Or asked for peace with words that could be manipulated (as did MIT Chaplain Fr. Daniel Moloney)? Can one ever really be safe anymore?

That repose, confidence, and peace of mind—among the chief blessings of civil society—are now things of the past, even for the most anonymous.

Statesmen of the past never came clean about the ills of this country, we’re told. They were never concerned about free government or establishing a national union. They were interested in white supremacy. And that is it. None of them were inveterate defenders of human rights. All of them should be consigned to the dustbin of history.

Who then should lead us in the effort to purge our past and establish a glorious future? Why should we listen to Frederick Douglass or Booker T. Washington when we have luminaries like Robin DiAngelo? Let’s empower a mob instead of appealing to the examples of Teddy Roosevelt or U.S. Grant—I bet that will turn the country around.

To call the low high and the high low is corruption. To call the stupid wise. To call the fanatical statesmanlike. To call the narrow-minded prophetic or the single-minded just. To praise ingratitude about the past as a virtue. Mediocrities and fanatics rise under our muzzled freedom, while those who are better, more honest, and more concerned about the whole political community are trampled underfoot and dishonored. Or forced out for writing that “buildings matter, too.”

3. Betrayal as a Form of Existence

What will you do when someone is cancelled?  Let’s say this person was a friend, but his taint could compromise your future. Perhaps you don’t disown him, at least not right away. Make a pot roast or give him a gift card. I’m so sorry. You would never lead the charge against your friend or colleague, but he or she has always been a little glib. It was inevitable, right?

The mildest form of betrayal is quietly watching as your colleague or friend is dragged through the mud, doing nothing and hardly noticing that the doomed person is no longer there once he is cancelled. Perhaps the senior curator at the San Francisco Museum of Modern Art, Gary Garrels, should resign for promoting “toxic white supremacist beliefs” like his decision to “continue to collect white artists” even while consciously emphasizing non-white artists. If he could be hounded out for that, you could be hounded out for defending him or recognizing his humanity publicly. Defending him could make a hostile or uncomfortable work environment for some.  He’s gone after all, and being a martyr does no one any good.

Does this silence do violence to your soul?

More severe forms of betrayal—renunciations—are hardly unknown. Secret screenshots of private text messages, selectively edited, can allow the words of a seeming friend to ruin a political career for sympathizing with “white supremacists,” as the case of Caylan Ford in Canada shows.

Perhaps your football team will demand severe consequences for wearing a One America News t-shirt and criticizing a corrupt mainstream media, as in the case of Mike Gundy. Perhaps an ambiguous comment during a private lesson could lead to an ouster.

Longtime colleagues will lead the charge against an Amy Wax or a William Jacobson without ever even meeting them face to face. Thus respected or tolerated colleagues become pariahs through a betrayal of civil and professional norms.

Many things can be betrayed, but personal integrity is always compromised when they are.

4. The Lie as a Form of Existence

Ideological lies sustain this new tyranny. All must conform their actions and train their minds to a false image of themselves. Everyone must applaud and salute. Other considerations must give way to the ideological lie.

Our lies are not the lies of communism, exactly. Our liars aim to destroy an existing society and to transform it. Our lies: All disparities are traceable to discrimination or systematic racism. Progress will come through liberation once our reactionary past is repudiated. Our past is unmitigated Darkness, and its victims are holy and blameless. Our deepest official lie is just this: The line between good and evil, indeed, runs through sexes, classes, and races, and not through every human heart. Many sing themselves a lullaby: telling our lies and believing them is safe. Our lies are easy to embrace since they contain some truth (and they do, but not the whole truth).

Should you start educating your kids with the official lies and cultivate their self-hatred? Or should you hope that they can thread the needle and maintain two faces for the rest of their lives?

One must not contradict the general, common lies. In the face of a mystery that doesn’t fit the official line (like black-on-black violence), reference to ready-made clichés are a perfect substitute for thought and make it unnecessary. Noticing such things is white supremacy.

If only the need for such lying were confined to one’s public life. What do you tell your children? Your children see you up close and personal, and they know you and respect you. But they have learned in our schools, increasingly mimicking the official line, that all white people are racist, whether they know it or not. Do you tell your children that their teacher is mistaken (and thus disrupt the authority that schools exercise over your kids) or that their teacher is right (and thus disrupt your own authority)?

It might be a matter of no small concern if your child, attending school, blurts out “my parents are not racist” or “my parents think all lives matter” or, worse yet, “all lives do matter.” Isn’t teaching such unauthorized beliefs in the home a matter of public importance? Perhaps child-services should be called, or the parents should be re-educated. Are child informers out of the question? Should you start educating your kids with the official lies and cultivate their self-hatred? Or should you hope that they can thread the needle and maintain two faces for the rest of their lives? No small question.

Can people come to enjoy throwing their fellow citizens into the void? Remember Brendon Eich? While CEO of Mozilla, his support for the nefarious cause of “traditional marriage” was exposed (see above on corruption). He was forced out of his position under pressure from a woke mob. While no doubt well off, he was an inventor and worker, but, for a while, no one would hire him. No sympathy could be showed to Eich, however. His blacklisting was a sign of our Virtue and Progress.

There is also some cruelty in schadenfreude. Sometimes the woke eat the woke. What could be more delicious? Perhaps you used some saucy language on social media. Your boss finds out and, shocked that such things happened and worried about the woke mob, fires you. Then it turns out that your boss has used precisely the same saucy language and flown confederate flags to boot! Isn’t it fun to watch him squirm after he made you, his subordinate, go? Does schadenfreude advance the cause of liberty?

Statues have been torn down hither and yon. New statues will someday be put in their place. What statues would our mob build?

Perhaps, someday, erected on the Google quad, we will see a pack of wolves, on the leash of a human resource manager. She will be readying to unleash these wolves on a man who, kneeling down supinely, thinks he deserves it. And people will nod in approval at the wolves who find their prey.

*This essay owes its structure and language to Aleksandr Solzhenitsyn’s “Our Muzzled Freedom,” from The Gulag Archipelago, Part IV, Chapter 3.