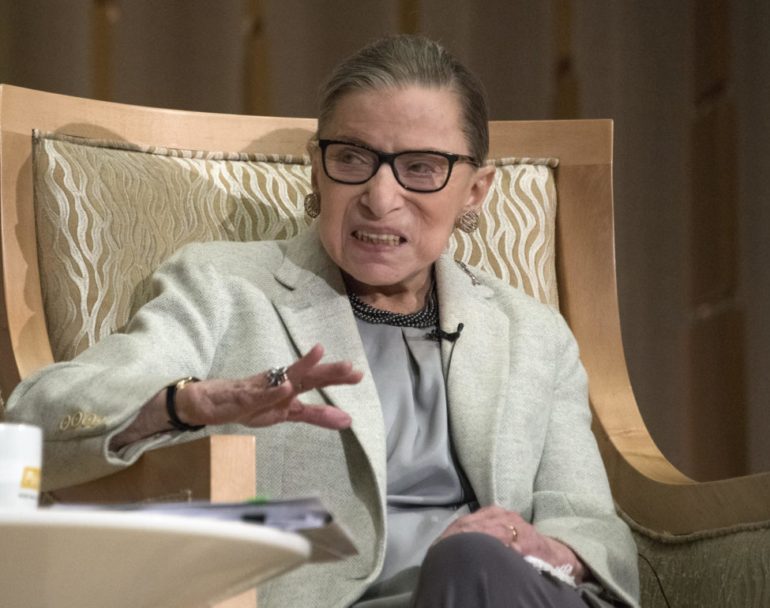 The travel ban has now been approved by a majority of the Supreme Court. While that puts to rest – at least for the time being – the constitutionality of this contentious matter, the case continues to raise questions about another question – why Justice Ruth Bader Ginsburg neither recused herself nor explained why she was not doing so. In my opinion, Justice Ginsburg behavior here is inexcusable.

Justice Ginsburg joined Justice Sotomayor’s opinion concluding that the travel ban was unconstitutional because President Trump exhibited anti-Muslim animus during the campaign and during his presidency.

During the presidential campaign, Ginsburg made several extremely inappropriate statements about Trump.

When asked by an interviewer about a possible Trump presidency and how it might affect the Supreme Court, she said: “I don’t want to think about that possibility, but if it should be, then everything is up for grabs.”

Days after that first interview, Ginsburg told a second interviewer: “I can’t imagine what this place would be—I can’t imagine what the country would be—with Donald Trump as our president.”
The prospect of a Trump presidency reminded her of something her late husband would have said: “Now it’s time for us to move to New Zealand.”

After another few days had passed . . . Ginsburg . . . confided to a third interviewer: “[Trump] is a faker. He has no consistency about him. He says whatever comes into his head at the moment. He really has an ego.”

The New York Times [then] opined that “Justice Ruth Bader Ginsburg needs to drop the political punditry and the name-calling.”

The next day, Ginsburg released a written statement:

On reflection, my recent remarks in response to press inquiries were ill-advised, and I regret making them. Judges should avoid commenting on a candidate for public office. In the future I will be more circumspect.

It is good that Justice Ginsburg recognized her mistake. The problem is that her apology did not undue the damage.

Judges are subject to a code of conduct and to recusal standards. The Code of Conduct provides that a judge should not “publicly endorse or oppose a candidate for public office.” While that Code does not technically apply to Supreme Court justices, the Chief Justice has assured the public that the justices conform to it. In addition, 28 U.S.C. 455 provides that any justice or judge “shall disqualify himself in any proceeding in which his impartiality might reasonably be questioned.” Further, “he shall also disqualify himself where he has a personal bias or prejudice concerning a party.”

While I am not an expert on recusal or judicial ethics, it certainly seems to me that Justice Ginsburg violated these standards and should recuse herself. At the very least, she should have explained why she did not do so. Yet, she said nothing.

Now, one might wonder whether statements about the President should really cause the recusal of a justice. After all, the President is the head of the executive branch and so is theoretically involved in all executive actions. So a recusal would be a very broad interference with the Justice’s duties.

Of course, this is one reason why a Supreme Court justice should not make extra judicial statements about a presidential candidate. But even if one thinks that statements about the President should ordinarily not lead to a recusal, this case is different. Not only is it a lawsuit against the President in his own name, it also centers more on the President’s personal behavior and character than other lawsuits against the executive branch. If one has a low opinion of Trump, then one is more likely to view his statements during the campaign as based on animus towards Muslims rather than as a sloppy way of referring to the problem of Islamic terrorism. Similarly, one would be more likely to view his subsequent policy as an attempt to implement his alleged anti-Muslim bias through a more moderate policy than as an attempt to implement a policy that is constitutional. The question here, of course, is not whether one believes that Trump exhibited anti-Muslim bias in this case. The point is that a low opinion of Trump may – and is probably likely to – influence one’s conclusion about his motivation.

Finally, there is an irony to Ginsburg’s behavior. A significant aspect of the opinion she joined was that Trump’s statements rendered illegitimate what would otherwise have been a policy that did not conflict with the Establishment Clause. Yet, that is also true of Ginsburg’s behavior – her anti-Trump statements suggest the possibility that her otherwise legitimate position was motivated by anti-Trump bias.

Like so many, Ginsburg can see defects in others that she is blind to in herself.