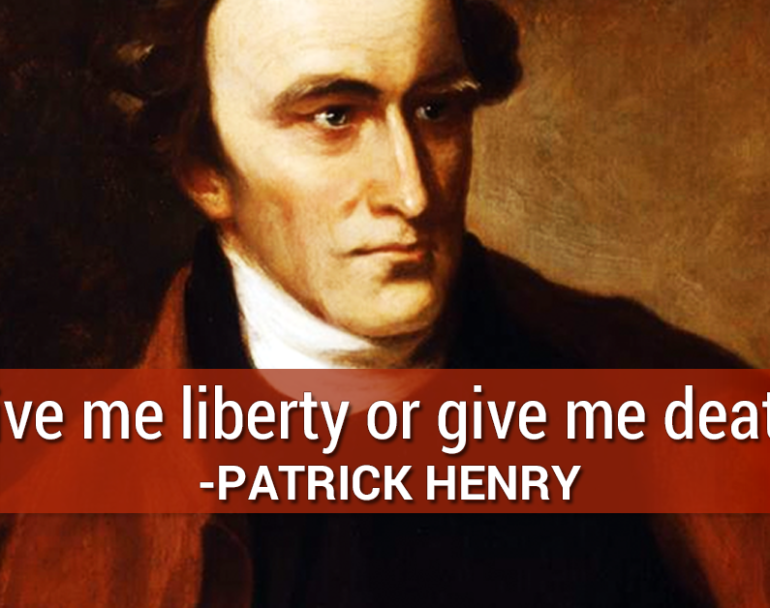 On March 23, 1775, tensions in Virginia were at their highest point during the imperial crisis with Britain.

The House of Burgesses, the state’s elected assembly, was about to make a bold decision which may have turned the tide of the entire patriot struggle – a decision commit its militia to the cause. Britain had responded to the Boston Tea Party the year prior with aggression toward Massachusetts – in the form of the Intolerable Acts. Virginians knew that any official pledge of military support could persuade the British to treat Virginia in the same way, and the matter became a hotly debated issue.

In St. John’s Church, Henry made a bombastic speech in which he drew a stark dichotomy between liberty and tyranny. Henry claimed the only legitimate authority over the colonies were the colonial governments, not Parliament – knowing that Virginians expected internal political matters to be addressed in Williamsburg, not London. If Britain violated these local interests, surely it would show contempt for Virginia’s “ancient constitution” that was recognized for centuries. In Henry’s mind, the hope of peaceful reconciliation had run its course. Although Henry refused to speak for others, he believed the outbreak of war was assured circumstances necessitated an ultimate choice between liberty and death:

“It is in vain, sir, to extenuate the matter. Gentlemen may cry, Peace, Peace – but there is no peace. The war is actually begun! The next gale that sweeps from the north will bring to our ears the clash of resounding arms! Our brethren are already in the field! Why stand we here idle? What is it that gentlemen wish? What would they have? Is life so dear, or peace so sweet, as to be purchased at the price of chains and slavery? Forbid it, Almighty God! I know not what course others may take; but as for me, give me liberty or give me death!”
According to Edmund Randolph, the convention sat in silent consideration of Henry’s words for several minutes. Much of the Virginia General Assembly was stunned by the provocative nature of Henry’s comments. Those still hoping to avoid independence strongly believed that such words would cause additional strain between Virginia and the mother country. Henry was even accused of treason for his oratory. Despite the objections of some, Henry’s resolutions passed by the narrowest of margins, with popular figures such as George Washington and Richard Henry Lee voting in favor. On the dawn of independence, Virginia joined the military cause against the British.
Among the delegates within the assembly were George Washington, St. George Tucker, and Thomas Jefferson. While he did not particularly like Patrick Henry, Jefferson later wrote in reflection of his oratory: “It is not now easy to say what we should have done without Patrick Henry. He was before us all in maintaining the spirit of the Revolution.”

Henry’s speech was considered the defining moment that convinced the House of Burgesses to pass the resolution, and Virginia committed its militia to aid the patriot cause. Virginia was unarguably the important colony to be won over in the great struggle for independence, and the decision proved to be one of the most significant events that changed what at first seemed to be an isolated civil dispute between New England and the crown. The incident ignited Virginia’s transition from a British colony to an independent, republican state, and began to solidify a united, multi-colonial opposition toward Britain.