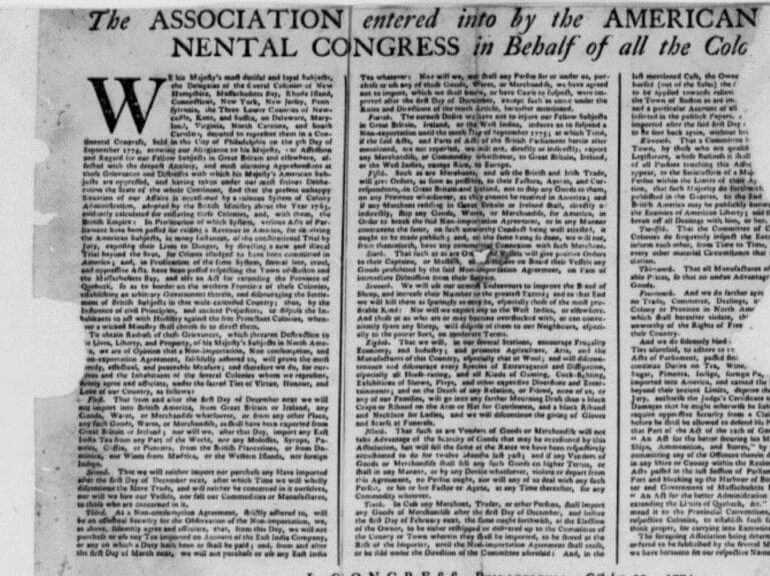 Today in history, on October 20, 1774, the First Continental Congress adopted the Continental Association. This agreement put teeth into the Declaration of Colonial Rights the Congress adopted a week earlier by formalizing a coordinated economic embargo on British goods.

The Association was the third significant step taken by the Continental Congress in response to the “Coercive Acts,” and represented one of the first formal shows of unity among the colonies. Today, it’s considered by many historians to be one of the four major founding documents, along with the Declaration of Independence, the Articles of Confederation, and the Constitution for the United States.

The Coercive Acts were a series of laws passed by Parliament in early 1774 to punish the colonies — particularly Massachusetts — after the Boston Tea Party. These acts included the Boston Port Act closing the Boston Port, the Massachusetts Government act stripping virtually all authority from the colonial government, the Administration of Justice Act stripping authority from local courts and authorizing trials to be held in Great Britain instead of Massachusetts, and the Quartering Act allowing British troops to take over private buildings.

Local  Committees of Correspondence kicked off resistance by passing resolutions opposing the Coercive Acts. The best-known was the Suffolk Resolves, adopted on Sept. 9 by delegates at the  Suffolk County (Massachusetts) Convention of the Committees of Correspondence. This local protest against the “Coercive Acts” called for non-cooperation with British authorities and for direct action to oppose what it condemned as illegitimate and unconstitutional acts by Parliament.

The Declaration and Resolves of the First Continental Congress laid out colonial objections to the Coercive Acts, listed their grievances, and outlined a list of colonial rights. The document set the stage for further colonial action resisting the British by expressing the colonists’ resolve “to enter into a non-importation, non-consumption, and non-exportation agreement or association.”

The Continental Association put the boycott resolution into effect, establishing a formal agreement between the 12 colonies represented in the Congress. (Georgia did not send delegates.)

Richard Henry Lee of Virginia suggested the document, which was based on the Virginia Association adopted in 1769 in response to the Townshend Acts. The Virginians agreed that they would “not at any Time hereafter, directly or indirectly import, or cause to be imported, any Manner of Goods, Merchandize, or Manufactures, which are, or shall hereafter be taxed by Act of Parliament, for the Purpose of raising a Revenue in America.”

The Continental Association started with an affirmation of loyalty to the king, but quickly pivoted to reasserting the colonies’ grievances previously stated in the Resolves, declaring that the “unhappy Situation of our Affairs is occasioned by a ruinous System of Colony Administration, adopted by the British Ministry about the Year 1763.”

The document went on to establish a series of economic sanctions against the British, including an immediate ban on the importation of British tea. Beginning on December 1, the colonies agreed to stop importing or consuming any goods from Great Britain, Ireland, or the British West Indies.

“We will not import into British America, from Great Britain or Ireland, any Goods, Wares, or Merchandise whatsoever, or from any other Place, any such Goods, Wares, or Merchandise, as shall have been exported from Great Britain or Ireland; nor will we, after that Day, import any East India Tea from any Part of the World, nor any Molosses, Syrups, Paneles, Coffee, or Pimenta, from the British Plantations, or from Dominica, nor Wines from Madeira, or the Western Islands, nor foreign Indigo.”

The Association also threatened an export ban if Parliament didn’t repeal the Coercive Acts by Sept. 10, 1775.

The agreement included a commitment by the colonists to not raise prices.

“That all Manufactures of [this country be sold at reason]able Prices, so that no undue Advantage [be taken of a future scarcity of] Goods.”

The adoption of the Continental Association was a significant step in colonial resistance to Parliament. It demonstrated the colonies’ willingness and ability to work together in a coordinated way. It also drew a concrete line in the sand letting the British know that the colonies were not just going to protest – they were willing to take concrete actions to resist unconstitutional and tyrannical actions.