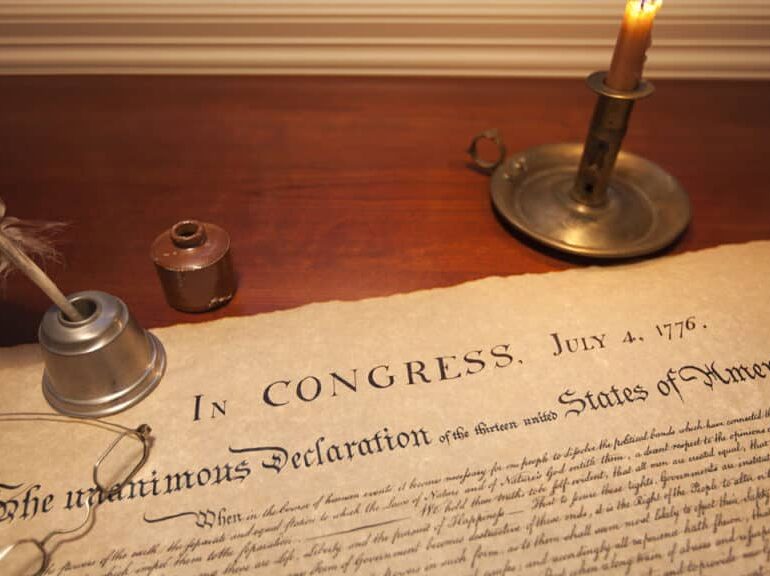 Should America embrace libertarianism? Many would regard such a prospect as recklessly experimental. This is partly because they regard libertarianism as some crackpot scheme cooked up in the last few decades.

Murray Rothbard wrote in his 1973 book For a New Liberty: The Libertarian Manifesto:

“…historians now realize that the American Revolution itself was not only ideological but also the result of devotion to the creed and the institutions of libertarianism. The American revolutionaries were steeped in the creed of libertarianism, an ideology which led them to resist with their lives, their fortunes, and their sacred honor the invasions of their rights and liberties committed by the imperial British government.”

To say that the American revolutionaries were libertarian may initially strike one as anachronistic. After all, they certainly did not refer to themselves as “libertarians.” People did not start identifying as libertarian until the 20th century.

But we shouldn’t get so hung up on words that we lose sight of the ideas to which they refer.

The cause for which the American revolutionaries declared and asserted independence are clearly articulated in the Declaration of Independence. And that cause—a well-defined, Lockean conception of rights—is the same cause espoused by libertarians today.

Libertarianism is only relatively new to America as a word, not as an idea. The term was coined to give a name to the ideas that had previously been known as “liberalism.” The makeshift was necessary, because “liberalism” had been corrupted and ultimately inverted to signify the opposite of its original meaning.

However, the American revolutionaries did not call themselves “liberals” either. That appellation did not start catching on until after 1776.

One word the American revolutionaries did identify with was “Whig.” According to the Online Etymology Dictionary, starting in 1768 and continuing into the Revolution, “Whig” meant “colonist who opposes Crown policies.”

This usage had roots in British history. The earlier British Whigs were the opponents of royal absolutism who deposed James II of the absolutist Stuart dynasty in the so-called “Glorious Revolution” of 1688 and then ratified the English Bill of Rights in 1689.

The American founders who liberated themselves from another absolutist British monarch and instituted their own Bill of Rights saw themselves as inheritors of the grand Whig tradition. What that tradition consisted of was related by Daniel Hannan in his 2013 book Inventing Freedom: How the English-Speaking Peoples Made the Modern World:

“One popular pamphlet published in 1775 defined the Patriot’s creed as resting on “the principles of Whigs before the Revolution [the Glorious Revolution of 1688] and at the time of it.” What were these principles? The pamphleteer listed them concisely. Lawmakers should be directly accountable through the ballot box; the executive should be controlled by the legislature; taxes should not be levied, nor laws passed, without popular consent; the individual should be free from arbitrary punishment or confiscation; decisions should be taken as closely as possible to the people they affected; power should be dispersed; no one, not even the head of state, should be above the law; property rights should be secure; disputes should be arbitrated by independent magistrates; freedom of speech, religion, and assembly should be guaranteed.”

The pamphleteer, Matthew Robinson, added the “before 1688” qualifier to clarify that by “the principles of the Whigs”:

“I don’t, however, mean of certain modern Whigs, who seem more fond of the word than of any thing belonging to the character; who have, perhaps, at one time or other of their lives, counteracted all the measures and contradicted all the principles that ever did honour to the name”

The American Patriots in the Thirteen Colonies, according to Wikipedia, adopted the appellation “Old Whigs,” probably to make a similar distinction.

The corruption and inversion of “Whig” may have been why “liberal” was adopted in its place. “Liberal” was then corrupted and inverted in turn, necessitating the adoption of “libertarian.” The same fate may befall “libertarian” if we are not careful.

Pushing back against the politically-motivated corruption of language is a worthy cause. But a more fundamental task is to immunize ourselves from weaponized words by deepening and renewing our understanding of the underlying ideas for which words are merely shorthand.

America was founded by libertarians. And America can be libertarian again: but only if we are abundantly clear—to ourselves and to others—what exactly we mean by that. To attain such clarity, we must shift our time and energy away from invective and slogans and toward truly mastering the freedom philosophy ourselves and then elucidating it for others.

This article was originally published on FEE.org. Read the original article.