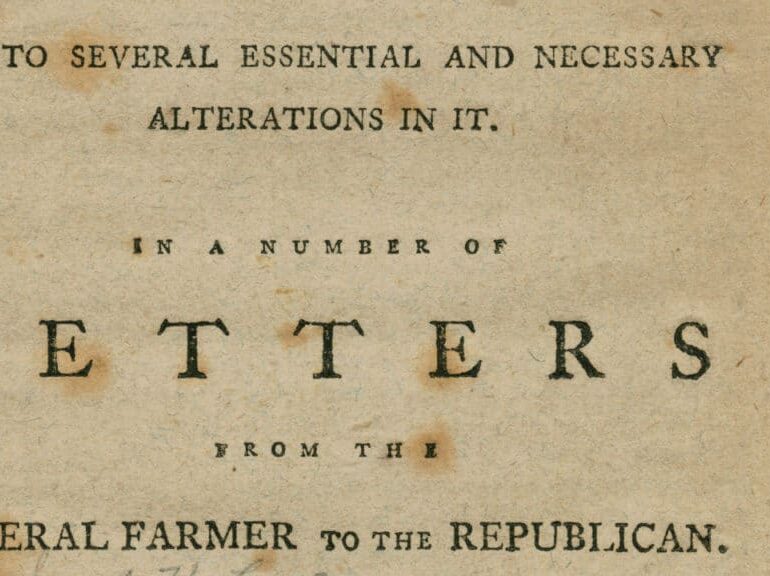 During the debates over ratification of the Constitution, one of the most influential and important series of papers were written by the Federal Farmer, an anti-federalist who forcefully warned that the proposed federal government would lead to consolidation and a destruction of liberty.

After the Philadelphia Convention concluded, a national debate followed as to whether the states should vote to ratify the proposed Constitution. Proponents like Alexander Hamilton and James Madison penned dozens of essays collectively known as the Federalist Papers defending and explaining how the new form of government would work.

On the other side there were anti-federalists writers opposed to ratifying the Constitution because they feared the new powers the federal government would obtain through it. Among those writers was the Federal Farmer, believed for nearly two centuries to be Richard Henry Lee, but recent scholarship suggests that Lee’s authorship is highly unlikely. As noted by the Lee Family Archive:

The Federal Farmer wrote 18 letters from October 1787 to January 1778 discussing and critiquing the proposed constitutional framework. Those letters were later published in two pamphlets.

His overriding concern was that the Constitution would give too much power to the central government. Specifically, he worried that it would ultimately swallow up the states.

Federalists argued that the Constitution would allow the general government to address issues it could not due to a lack of authority under the Articles of Confederation. In his first letter dated on Oct. 8, 1787, the Federal Farmer acknowledged existing problems, though he still felt the new government was too much.

“The instability of our laws increase my wishes for firm and steady government; but then, I can consent to no government, which, in my opinion, is not calculated equally to preserve the rights of all orders of men in the community.”

He wrote further that “a federal government of some sort is necessary. We have suffered the present to languish; and whether the confederation was capable or not originally of answering any valuable purposes, it is now but of little importance.”

While he acknowledged the need for a general government, like many anti-federalists, he thought the new government proposed by the Constitution would overwhelm the states.

“The plan proposed appears to be partly federal, but principally however, calculated ultimately to make the states one consolidated government. We do away the state governments, or adopt measures that will tend to abolish them, and to consolidate the states into one entire government several principles should be considered and facts ascertained.” [Emphasis added]

The Federal Farmer wasn’t only concerned about the federal government undermining the states. He worried that it would swallow up the power of the people themselves.

However, he added that “examining the proposed constitution carefully, we must clearly perceive an unnatural separation of these powers from the substantial representation of the people.”

He continued this same line of reasoning In his third letter dated Oct. 10, 1787. Here, he explained why: the federal government would assume so much power that it would render the state governments meaningless.

“Many powers that respect internal objects ought clearly to be lodged in it; as those to regulate trade between the states, weights and measures, the coin or current monies, post-offices, naturalization, &c. These powers may be exercised without essentially effecting the internal police of the respective states: But powers to lay and collect internal taxes, to form the militia, to make bankrupt laws, and to decide on appeals, questions arising on the internal laws of the respective states, are of a very serious nature, and carry with them almost all other powers. These taken in connection with the others, and powers to raise armies and build navies, proposed to be lodged in this government, appear to me to comprehend all the essential powers in the community, and those which will be left to the states will be of no great importance.” [Emphasis added]

While not opposed to delegating more power to the federal government, the Federal Farmer felt the list of powers in the proposed constitution went much too far. He continued:

“Not sanguine in my expectations of a good federal administration, and satisfied, as I am, of the impracticability of consolidating the states, and at the same time of preserving the rights of the people at large, I believe we ought still to leave some of those powers in the state governments, in which the people, in fact, will still be represented—to define some other powers proposed to be vested in the general government, more carefully, and to establish a few principles to secure a proper exercise of the powers given it.” [Emphasis added]

One of the most controversial aspects of the proposed Constitution was the power of taxation, which the Federal Farmer felt would lead to political feuds at a national level over the purse strings, and further undermine the power of the states.

“Perhaps, nothing could be more disjointed, unweildly and incompetent to doing business with harmony and dispatch, than a federal house of representatives properly numerous for the great objects of taxation, &c. collected from the several states; whether such men would ever act in concert; whether they would not worry along a few years, and then be the means of separating the parts of the union, is very problematical?—View this system in whatever form we can, propriety brings us still to this point, a federal government possessed of general and complete powers, as to those national objects which cannot well come under the cognizance of the internal laws of the respective states, and this federal government, accordingly, consisting of branches not very numerous.” [Emphasis added]

He further wrote that “a power to lay and collect taxes at discretion, is, in itself, of very great importance. By means of taxes, the government may command the whole or any part of the subject’s property. Taxes may be of various kinds; but there is a strong distinction between external and internal taxes.”

Like most anti-federalists, including Patrick Henry, the Federal Farmer believed a bill of rights would help address some of their concerns.

However, he wrote that “I do not pay much regard to the reasons given for not bottoming the new constitution on a better bill of rights. I still believe a complete federal bill of rights to be very practicable. Nevertheless I acknowledge the proceedings of the convention furnish my mind with many new and strong reasons, against a complete consolidation of the states.” [Emphasis added]

In other words, like Henry he believed a bill of rights would help, but its inclusion still wouldn’t draw his support.