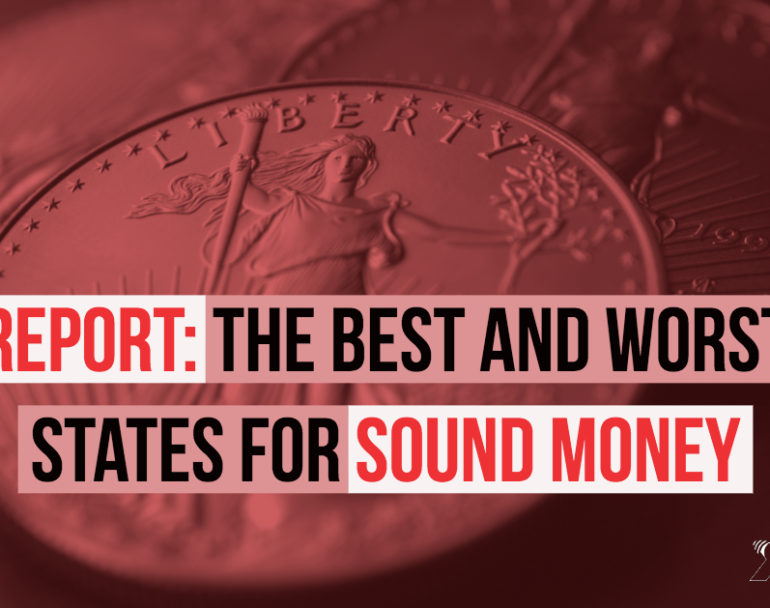 CHARLOTTE, N.C. (July 12, 2018) – Utah, Texas, and Wyoming round out the top three most sound money-friendly states in the U.S., according to the 2018 Sound Money Index, released by the Sound Money Defense League and Money Metals Exchange.

The 2018 Sound Money Index is the first index of its kind, ranking all 50 states using nine indicators to determine which states have implemented the most pro-sound money policies in the country.

“The Sound Money Index tracks the state of sound money in the United States. While no state has yet achieved a score higher than 64 percent, many have made progress by removing taxation on gold and silver, passing laws that reaffirm that gold & silver are money, and establishing bullion depositories,” he said. “Utah, Texas, and Wyoming lead the pack, but several states are not far behind. Legislatures in Arizona, Alabama, and North Carolina, to name a few, have passed good legislation recently. We expect this trend to continue.”

Utah and Wyoming tied for number one based on the nine criteria in the Sound Money index. The “Utah Specie Tender Act of 2011” removed all taxes levied against precious metals and reaffirmed gold and silver’s status as money. Also, the state-level sales and income tax burden Utah places on its citizens fall below national averages. These efforts secure Utah a top ranking.

Texas rounds out the top three best sound money states with its combination of pro-sound money tax policies, a state bullion depository, and because it holds some of its public pension funds in physical gold bullion. While Texas has stopped levying sales tax against sound money, Texas’ state sales tax rate is above the national average. Furthermore, the index only awards Texas two points for the main income tax score, whereas Utah earned four points for its work on specifically and pointedly removing income tax as to gold and silver. Texas simply has no state income tax generally.
Imagine if you asked a grocery clerk to break a $5 bill and he charged you a 35 cent tax. Silly, right? After all, you were only exchanging one form of money for another. But that’s essentially what taxes on gold and silver bullion do. By removing the taxes on the exchange of gold and silver, Wyoming will treat specie as money instead of a commodity. This represents a step toward reestablishing gold and silver as legal tender and breaking down the Fed’s monopoly on money.

More than 75 percent of states have at least partially removed sales tax from gold and silver, while only 12 states still levy full sales tax against constitutional money. A few states have also removed income tax from the monetary metals.

“States that eliminate the disincentives to holding and using sound money are helping their citizens protect against the potentially harmful effects of the Federal Reserve’s unbacked system and honoring the U.S. Constitution,” Money Metals Exchange president Stefan Gleason said.