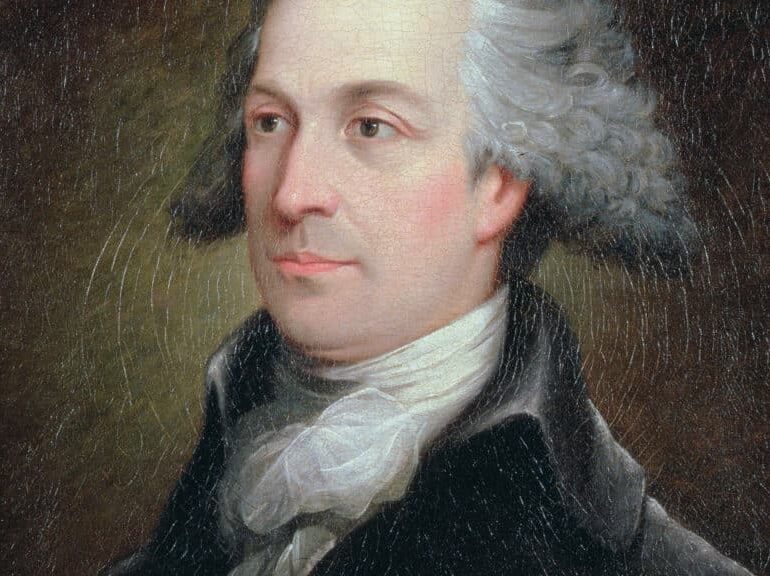 Tench Coxe isn’t well-known today, but he was an influential figure in the founding era. Coxe advocated for the new Constitution and the Bill of Rights, and he wrote extensively about the right to keep and bear arms.

In their paper Tench Coxe And The Right To Keep And Bear Arms, Stephen P. Halbrook and David B. Kopel demonstrate that Coxe and others viewed the Second Amendment as about the right of individuals to privately own weapons, including weapons of war, for various purposes.

Coxe’s writing in defense of the right to keep and bear arms was prolific.

“No one in the early republic wrote more about the right to arms than did Coxe” Halbrook and Kopel write.

Coxe backed up his writing with action, particularly as purveyor of public supplies in Thomas Jefferson’s administration. In that position, he sought to boost the domestic arms industry by purchasing weapons for militiamen who couldn’t afford to buy their own. Coxe also saw this as a way of arming ordinary citizens.

One of the best pieces of evidence for the pro-private ownership interpretation is that Coxe wrote a newspaper article days after the Bill of Rights was introduced describing the right to keep and bear arms as an individual right.

Commenting on the Second Amendment, he wrote:

As civil rulers, not having their duty to the people before them, may attempt to tyrannize, and as the military forces which must be occasionally raised to defend our country, might pervert their power to the injury of their fellow citizens, the people are confirmed by the article in their right to keep and bear their private arms.”

Shortly after its publication, Coxe sent a copy of the newspaper article to James Madison, who wrote Coxe a letter complimenting the article:

“How far the experiment (proposed constitutional amendments) may succeed in any of these respects is wholly uncertain. It will however be greatly favored by explanatory strictures of a healing tendency, and is therefore already indebted to the co-operation of your pen.”

If there was any disagreement with Coxe’s position among those involved in drafting the Constitution or the Bill of Rights, someone would have spoken up.

The argument that the Second Amendment only applies to the National Guard or military doesn’t hold up when the historical record is reviewed. At the time of the Revolution, all able-bodied men in every colony except Pennsylvania had to be a member of a local militia, but they were required to bring their own functioning firearm for drilling and deployment if mustered.

The Pennsylvania Constitutional Convention of 1776 also adopted a provision in its State Declaration of Rights declaring that “that the people have a right to bear arms for the defence of themselves and the state.”

However, that Constitution also stated that “freemen of this commonwealth and their sons shall be trained and armed for its defence.” [Emphasis added]

This is what the term “well-regulated” means in the Second Amendment.

The emphasis on individual firearm ownership is easy to understand considering British efforts to disarm private citizens leading up to the War of Independence. In 1775, General Thomas Gage confiscated firearms in Boston as the city was under siege, then prevented the disarmed populace from leaving as promised. In 1778, General William Howe disarmed the people of Philadelphia while it was under occupation.

Much of the impetus behind the Second Amendment was fear of a standing army. Having a well-armed populace, Coxe wrote in an article, would prove a check against a military tyranny:

“The power of the sword, say the minority of Pennsylvania, is in the hands of Congress. My friends and countrymen, it is not so, for THE POWERS OF THE SWORD ARE IN THE HANDS OF THE YEOMANRY OF AMERICA FROM SIXTEEN TO SIXTY. The militia of these free commonwealths, entitled and accustomed to their arms, when compared with any possible army, must be tremendous and irresistible. Who are the militia? are they not ourselves.”

Coxe’s commentary makes it clear that the militia was a body of citizenry that operated itself, rather than an extension of and at the whim of the government. Militia had a degree of autonomy and volition that the National Guard does not, as it answered to either the governor or the president.

As Coxe saw it, the independent nature of the militia would protect them from potential overreach – because ultimately the people themselves were in control.

“Is it feared, then, that we shall turn our arms each man against his own bosom. Congress have no power to disarm the militia. Their swords, and every other terrible implement of the soldier, are the birthright of an American. What clause in the state or [federal] constitution hath given away that important right …. [T]he unlimited power of the sword is not in the hands of either the federal or state governments, but where I trust in God it will ever remain, in the hands of the people.” [Emphasis added]

Some argue that the fact the federal government armed local militias undermines the individual ownership interpretation. Halbrook and Kopel call this view “incoherent on its face.”

“Just because the government today gives people things to read, such as the vast output of books from the Government Printing Office, does not mean that individuals do not have a right to read other books of their own choosing. This principle wouldv still be true even if the government ordered the people to read certain books considered essential to public service.”

At the same time, Halbrook and Kopel note that Coxe’s understanding of private gun ownership did not justify taking up arms against the government on any pretense deemed to be “tyrannical,” as some gun control advocates claim. During the Whiskey Rebellion Coxe opposed western farmers violently resisting the whiskey excise tax.

“Coxe clearly believed in the individual right to arms, and he just as clearly believed that it was wrong for the Pennsylvania farmers to take up arms against a lawful tax that had been duly created through proper constitutional methods,” Halbrook and Kopel write.

Incidentally, Coxe was an abolitionist who acknowledged that freeing slaves would allow them to keep and bear arms, an observation that the U.S. Supreme Court would make decades later in its infamous 1859 Dred Scott decision.

As Halbrook and Kopel state at the beginning of the paper, the evidence is overwhelming. No Founding Father ever claimed private citizens could only own firearms if they belonged to a militia. Gun control proponents attempt to put the burden of proof on gun rights activists that it’s otherwise.

But this also is founded on the belief that rights must come from government. That is not what the Second Amendment was written to do. It was intended to remove any doubt that the federal government had no authority to restrict firearms whatsoever.