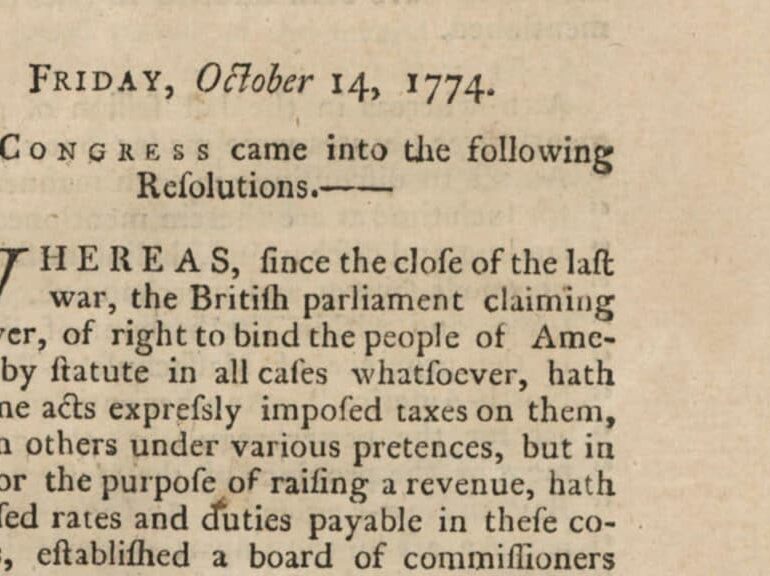 As the British put increased pressure on the American colonists in an effort to force them into submission, the colonists backed up their increasingly forceful rhetoric with concrete actions to undermine British authority.

The colonists began perfecting this formula after the passage of the Stamp Act in 1765. Resistance started with protests. Patrick Henry drafted a series of resolutions. In the seventh – and in a precursor to the delegated and reserved powers of the 10th Amendment, he asserted, “the Inhabitants of this Colony, are not bound to yield Obedience to any Law or Ordinance whatever,” regarding such taxes outside of those passed by the colonial assemblies.

But it didn’t end with resolutions.

Other prominent colonists added their voices to the protest, calling on the people to follow what Henry asserted in principle. John Dickinson wrote, “IF you comply with the Act by using Stamped Papers, you fix, you rivet perpetual Chains upon your unhappy Country. You unnecessarily, voluntarily establish the detestable Precedent, which those who have forged your Fetters ardently wish for, to varnish the future Exercise of this new claimed Authority.”

Patriots throughout the 13 colonies blocked the distribution of stamped paper, forced stamp agents to resign, and effectively made that act impossible to enforce. Ultimately, mass resistance and noncompliance forced Parliament to repeal the hated law.

“the patriots took a fierce stand against an odious law. In doing so, they inspired tireless masses to their cause, brought about a reversal of policy without representation in Parliament, and changed the world as we know it.”

While the colonists effectively nullified the Stamp Act, it didn’t end British efforts to maintain control over the colonies. Tensions continued to grow and reached another boiling point with the Boston Tea Party.

To punish the colonies, particularly Massachusetts, the Parliament passed a series of acts together known as the “Coercive Acts.” These included the Boston Port Act closing the Boston Port, the Massachusetts Government act stripping virtually all authority from the colonial government, the Administration of Justice Act stripping authority from local courts and authorizing trials to be held in Great Britain instead of Massachusetts, and the Quartering Act allowing British troops to take over private buildings.

Even before the Tea Party, the colonists had formed local political bodies known as committees of correspondence in response to increasing tensions with the British government. These representative organizations formed an underground communications network to promote the patriot cause and coordinate political action.

Local Committees of Correspondence kicked off resistance by passing resolutions opposing the Coercive Acts. The best-known was the Suffolk Resolves, adopted on Sept. 9 by delegates at the Suffolk County (Massachusetts) Convention of the Committees of Correspondence. This local protest against the “Coercive Acts” called for non-cooperation with British authorities and for direct action to oppose what it condemned as illegitimate and unconstitutional acts by Parliament.

A strong spirit of noncooperation ran through the resolves. The resolutions declared that given the British government was acting contrary to the constitution, the colonists were under no obligation to obey these illegitimate acts.

“No obedience is due from this province to either or any part of the acts above-mentioned, but that they be rejected as the attempts of a wicked administration to enslave America.”

Within a month, colonists in Massachusetts backed up their fiery rhetoric with concrete action.

In early October 1774, Governor Thomas Gage dissolved the provincial assembly under the terms of the Government Act. On Sept. 1 he called for the election of representatives to a General Court to meet in Salem on Oct. 5, but on Sept. 28 he discharged them.

But the body disregarded Gage and ninety elected representatives met as scheduled in Salem anyway. The body formulated a list of delegates and chose officers of the assembly. Two days later the body reconvened in Concord and organized itself into a Provincial Congress, electing John Hancock president.

The Massachusetts Provincial Congress quickly became the de facto government of Massachusetts outside of Boston. It assumed all powers to rule the province, collected taxes, purchased supplies, and raised a militia.

“That the several Constables and Collectors of Taxes throughout the Province, who have or shall have any Moneys in their hands collected on Province Assessments, be advised not to pay the same, or any part thereof, to the Honourable Harrison Gray, Esq?, but that such Constables and Collectors, as also such Constables and Collectors as have or shall have any County Moneys in their hands, take and observe such orders and directions touching the same, as shall be given them by the several Towns and Districts by whom they were chosen. And that the Sheriffs and Deputy Sheriffs of the several Counties in the Province, who have in their hands any Province Moneys, be also advised not to pay the same to the said Harrison Gray, Esq?, but that they retain the same in their hands respectively, until the further advice of a Provincial Congress, or order from a constitutional Assembly of this Province.”

In effect, the colonists asserted local control over their taxes and deprived the British Crown of colonial revenue. This was an important and concrete step in asserting self-governance.

This demonstrates the formula the colonists used over and over again during the years leading up to the Declaration of Independence. They made their philosophical case through resolutions and proclamations and then backed them up with concrete resistance.

The strategy was powerful and effective. The colonists built and maintained local support by keeping their principles front and center. But they didn’t relay on words alone. They pushed back forcefully against British tyranny and made it increasingly difficult for the Crown to enforce its will.